Kiev talker, or Well, where we do not

15 May 2014
162
The round table in Ukraine, according to the statements of its organizers, is an attempt to find a peaceful way out of the Eastern crisis. May 14 Kiev at the negotiating table gathered Kiev "temporary worker" and their supporters from the regions of the independent. "Separatists" refused to participate in the event. According to others, they were not invited. In recent weeks, the press has been filled with propaganda, and it has become not just difficult to grasp the truth, but already impossible. Truth-fish in the muddy lake is not found. 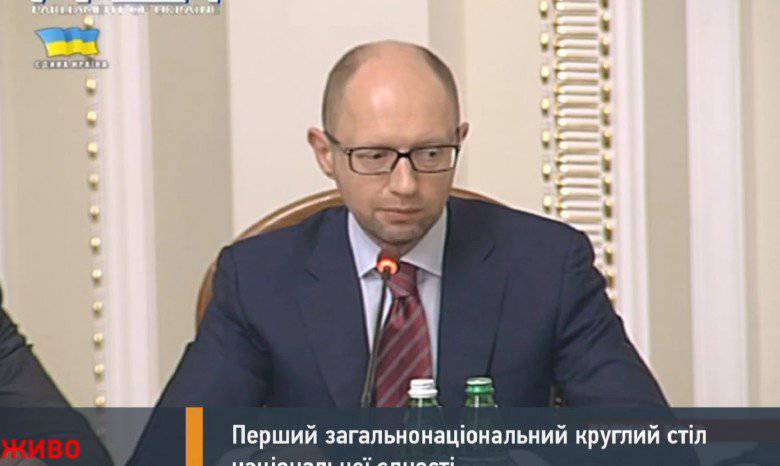 If they were not invited, then it looks like something stupid: Kiev, it turns out, actually abandoned the breakaway regions. Or hopes to unleash a real civil war and win it. What, with the support of NATO soldiers? Or UN peacekeepers? However, between the first and second difference is almost gone.

If the southeastern leaders refused, such a position does not seem politically convincing - especially since Moscow called the Southeast for the “round table”. No wonder the OSCE representative recalled that Vladimir Putin supported the idea of ​​a “road map”. On the other hand, the “separatists” no longer consider their regions a part of Ukraine, and therefore the refusal looks logical. That is, the idea of ​​federalization after two referendums has already been buried.

The round table talks were led by German diplomat Wolfgang Ischinger, the OSCE representative. The event was attended by former presidents of Ukraine Kuchma and Kravchuk (for some time they were inseparable - apparently, they are linked by democratic aspirations), presidential candidates, the American ambassador Jeffrey Payette and other people concerned about a bright future independent. Yushchenko was not invited to the “table” (they say he was very offended).

As the correspondent "Vesti" Oleksandr Balitsky, the Kiev regime charged the Donbass with the appointed governor and oligarch Sergei Taruta.

However, Elena Bondarenko, deputy of the Verkhovna Rada from the “Party of Regions”, said that if there are no representatives from the South-East at the meeting, then there is no one to hold the dialogue. And she added that it is impossible to conduct a military operation against his people.

Yatsenyuk made magic spells: constitutional reform, decentralization of power, the fight against corruption, economic and humanitarian policy. It's all. It became clear that the “counterterrorist operation” would continue.

Ukrainian site "Controversy" writes about the round table the following:

“... not only“ separatists ”, but even quite legitimate representatives of local self-government represented by, for example, members of the Lugansk Regional Council, were not invited to the current gathering of peacekeeping authorities. Despite the fact that Arseny Petrovich himself named representatives of the local political elite among those with whom he is ready to negotiate. If only they were civilized according to Yatsenyuk. Well, Arseny Petrovich famous capricious - gave the word, took the word. Why call the elected barbarians from the East to the feast - I suppose, and without them there is someone to decide their fate.

However, local deputies can be comforted by the fact that there was no corner at the round table not only for them - they did not call the third president of Ukraine. Yushchenko is offended, he did not fail to inform civilized mankind through the mouth of a specially trained person, Irina Vannikova. A spokesman for Viktor Andreich revealed the insignificant intention of the round table producers: “The initiators put their personal political interests and settling accounts above the interest of saving the country, and it looks like the politicians are not ready to hear the truth and reasoned estimates of their miscalculations.”

Oh, another terrific statement. Drawn another savior of Ukraine - Yushchenko. Didn't he try himself already in this role?

Statements were also made to Mr. Yushchenko against the current rulers that they supposedly lost the Crimea. Nyura from “Controversy” remarks: is it not with him that Ukraine lost hundreds of kilometers of the oil-bearing shelf at about. Snake?

Analyst El Murid считает The “round table of national unity” held by the “junta”, an event “absolutely useless”. According to him, "the train has already left." That is, time is lost.

“It is obvious that Kiev does not even attempt to understand what is happening. Why, two months after the shooting on Institutskaya from Kiev, as from a leper, three regions of Nezalezhnaya have already fled. Punitive operation continues, people die. In such circumstances, it is meaningless to talk about the state system - people are primarily interested in security, and only then - how to live in a bright and happy future. ”

According to El-Murid, no decisions can be made at the round table. The only thing the junta is doing is searching for enemies. Here, of course, Russians (the “neighboring state”) turn upside down.

“... The infantilism of the undead, from whom others are to blame, but not only him, can be attributed to all sorts of hormonal changes in consciousness — it is inadequate what to take from it. But when entire groups of the population behave in the same way, the question of the mental health of an entire nation can no longer be put.

While the "Round Table" is rolling in the same direction. Groped agreement on the issue - who is the enemy. Who is guilty. Who needs to be liquidated to make life more fun. It is necessary to understand that a positive solution to the problem is still impossible in principle - if only because it is not looking for where it is located. ”


The results of the "table" summed up "First channel". Some curious details came to light. For example, about the performance of Klitschko.

“People from the east must be present - reputable. Those delegated by residents of the eastern regions - Lugansk, Donetsk. To whom there is trust. Who can represent their interests, ”he said.

What do representatives of the Donetsk People's Republic think about the negotiations?

“No negotiations are possible at the time when there is an armed shelling of Slavyansk, a punitive operation in Krasnoarmeysk, shootings of the police, which did not want to shoot civilians in Mariupol. That is, what negotiating table can we talk about in this case? Of course, this is a hypocrisy of the highest standard, ”said Miroslav Rudenko, co-chairman of the DPR government.

Wolfgang Ischinger did not say anything concrete. “I want to say that you can count on me and on my team. I am here to help you, to cooperate with the two co-chairs, to bring this wonderful country to Europe, and to ensure a prosperous future for it ”, - these are his words, quoted by“ First Channel ”.

To this we can add that the peoples of the former USSR have long been consuming tales about a bright future, never ceasing to believe in their plots. This faith is akin to religious. It is only necessary to go through a difficult moment - and here it is, the future.

The USSR collapsed in the 1991 year, but the tales have survived. Only now the “beautiful far” is promised not by the Soviet communist rulers, but by the representatives of the western capitalist paradise. And many Ukrainians believe that a step to Europe will automatically give them happiness.

But only well where we are not.

Observed and commented on Oleg Chuvakin
- especially for topwar.ru
Ctrl Enter
Noticed oshЫbku Highlight text and press. Ctrl + Enter
We are
Results of the week. “When a lot of people look stupid, it starts to look normal.”Results of the week. "Yes, with such pigs somehow you yourself become ..."
Military Reviewin Yandex News
Military Reviewin Google News
162 comments
Information
Dear reader, to leave comments on the publication, you must sign in.