Finland in alliance with the Entente against Russia. The first Soviet-Finnish war. Part of 2

15 May 2014
8
After the failure of the attack on Petrozavodsk and Olonets, all the Mannerheim plans to organize a campaign against Petrograd through the Karelian Isthmus ended with a collapse. Yudenich agreed to take over the northern capital of Russia, and the Provisional Government of the Northern Region, operating in Arkhangelsk. However, the Finnish parliament and the British government opposed the Finnish army march to Petrograd. Finnish parliamentarians believed that a campaign against Petrograd did not justify itself from a financial point of view. And the British just counted events a few steps ahead. They have already studied the Bolsheviks well, having a great experience in dealing with them. There was no doubt that the Finnish army would be smashed in London. In addition, the Finnish attack on Petrograd could annoy the Russians. Rejecting the Finns from Petrograd, the Red Army could even cross the Finnish border, and then the situation could get out of control. The Bolsheviks could restore Red Finland. It did not suit London.


It should be noted that the Karelian Isthmus was defended by the best parts of the Soviet 7th Army. A larger number of 7th Army guns were concentrated here - 119 of the 170 available guns. In addition, the Baltic Army was supported by naval artillery of the Baltic fleet. The fleet could not fight in the open sea, but was a powerful support for the ground forces. The Kronstadt fortress with its 305 mm, 254 mm, 203 mm and 152 mm guns was also a serious force. Given the developed railway network in the Petrograd region, which was tightly connected with Moscow, if necessary, reserves from Central Russia could be transferred to the Karelian Isthmus. Therefore, the Finnish campaign to Petrograd never took place. On July 25, 1919, Mannerheim lost the presidential election and once again left Finland.

However, the British stepped up assistance to Finland on the sea line. By the summer of 1919, the British forces in the Gulf of Finland had been increased to three light cruisers, eight destroyers and five submarines. In addition, the British began to use small torpedo boats. They were delivered on cargo ships to Sweden, and from there to Abo and Helsinki. Part of the crews of boats arrived in Finland as merchants, part - in the form of yachtsmen. As early as June 1919, English torpedo boats launched an 13 raid on Petrograd. On the night from 17 to 18 on June, an English torpedo boat, from the detachment of boats A. Ehgar, sank the Russian armored cruiser “Oleg” with a torpedo attack (the last of the Bogatyr cruisers).

In addition, in the summer of 1919, reconnaissance and combat flights of British and Finnish aircraft began in the Petrograd region. In late June - early July, the British fleet was reinforced with four cruisers, a seaplane base (for 12 cars) and seven torpedo boats. In July 1919, enemy planes flew over Kronstadt almost daily and sometimes bombed it. Soviet aviation responded with attacks on the islands of the eastern Gulf of Finland and the Finnish coast, tried to attack enemy ships, but without much success.

Since 1 August 1919, enemy aircraft bombed Kronstadt almost daily. They were based in Finland. On the night of 17 on 18 in August, British torpedo boats attacked ships of the Baltic Fleet in Kronstadt harbor (the so-called Kronstadt wake-up). The attack involved eight torpedo boats, which were based in Biorca and Terioki. To divert the attention of the Russians, first Kronstadt was attacked by British aircraft. They dropped 100-pound bombs and fired machine guns at ships. British and Finnish hydroplanes bombed and shelled Kronstadt almost daily and as scheduled, in the morning or in the evening, almost at the same time. Therefore, Kronstadters have become accustomed to these raids. In addition, airplanes usually dropped bombs from a great height and unaffected, without causing any special harm.

In 4 hours, torpedoes began to burst in the harbor of 20 minutes. The first to find the enemy was the guard destroyer Gabriel who was standing on the Small Kronstadt raid. The destroyer attacked two enemy speedboats. The first volley he covered the enemy: one boat was sunk, the other retreated. Then the "Gabriel" noticed a few more enemy boats. The watchman was able to drive away the boats that were trying to break through because of the Military Corner of the harbor. However, the boats going from the Military Corner along the harbor wall to the entrance to Middle Harbor could break through. The "Gabriel" could not shoot at them, as it was afraid to get on its ships, which stood behind the wall in the harbor.

One of the two English boats, which broke along the wall in the Middle Harbor, was hit by two torpedoes of the cruiser "Memory of Azov". The cruiser was a floating base of submarines, but the submarines that night changed the place of their stay and did not suffer. The second enemy boat was able to hit the battleship "Andrew the First Called." The battleship was hit by a torpedo in the nose of the left side (in the conditions of post-revolutionary devastation the ship was not restored and in the year 1924 was put out of action). Along the way, machine gunners gunned down the ships standing at the harbor wall. However, the music did not play long. In 4 hours 25 minutes both of these boats when leaving the harbor were destroyed by the destroyer "Gabriel". Another British boat was damaged by artillery fire, and so that it did not fall into the hands of the Bolsheviks, the British blew it up.

It should be noted that this attack, which received the unofficial name “Kronstadt wake-up” (sometimes called the battle “English wake-up”), made a huge impression on the red commanders. The criminal slobiness of the Baltic "little brothers" was quickly forgotten, and small torpedo boats, the only advantage of which was their speed, became the dream of the Red Warriors. Already in September, 1919 of the year, the Revolutionary Military Council of the Baltic Fleet appealed to the Revolutionary Military Council of the Republic with the request to immediately begin production of high-speed boats of this type. The boats were of a very simple design: two aircraft engines, the average speed of 40 nodes, and when the attack was launched, the boat could develop a higher speed. The armament was minimal - two torpedoes, machine guns, a redited body (redan - “step” on the bottom), which allowed gliding. As a result, similar boats were built in the USSR before the Second World War. The Second World War showed that they were outdated: the seaworthiness and range of action is low, the armament is weak. These boats could not go to any comparison with the large German torpedo boats.

In the future, Soviet and Anglo-Finnish aviation continued to exchange blows. On August 31, the Russian submarine Panther sank the British destroyer Vittoria built 1917 of the year. It was the first major victory of the Soviet submariners. September 4 on Russian mines killed the same type "Vittoria" destroyer "Verulam."

September 28 1919 of the year went on the offensive of Yudenich’s army. During the stubborn battles, the White troops occupied 12 in October, Yamburg, and in the second half of October - Luga, Gatchina, Krasnoe Selo, Tsarskoe Selo and Pavlovsk, reached the near approaches to Petrograd (Pulkovo Heights). Soon, however, the Red Army launched a counter-offensive and by December 1, Yudenich’s army was defeated. The surviving white units retreated to Estonia, where they were interned.

White suffered defeat in Russia, and London lost interest in further confrontation in the Baltic. In December 1919, the British fleet left the Gulf of Finland. Soviet Russia and Estonia signed a truce. 2 February 1920 was a peace treaty between the RSFSR and Estonia signed in the Estonian city of Tartu. In February 1920, the Red Army put an end to the white "Provisional Government of the Northern Region", which fled abroad. In March, the Red Army occupied Murmansk. 18 May 1920, the Red Army occupied Ukhta, the capital of the so-called. “The Provisional Government of Arkhangelsk Karelia”, which was recognized only by Finland. 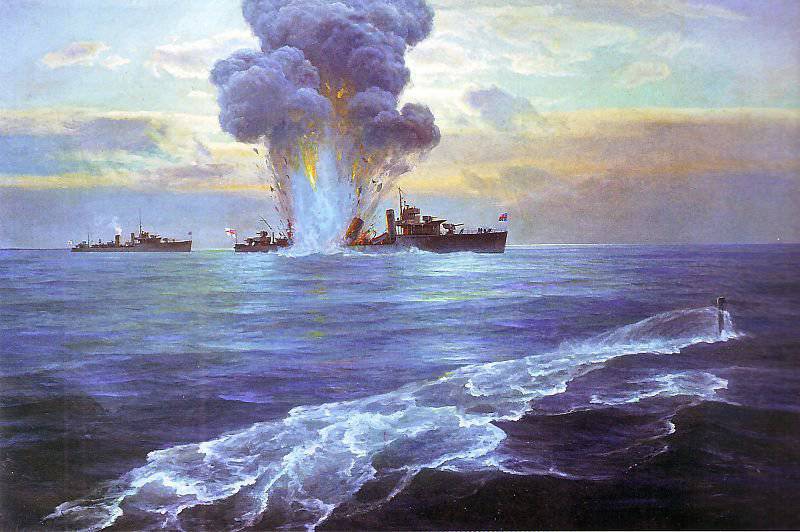 N. E. Bublikov and G.V. Gorshkov. "The sinking of the Baltic Fleet submarine" Panther "of the British destroyer Vittoria

From 10 to 14 in July 1920, Tartu hosted the peace negotiations between Soviet Russia and Finland. The Finnish government demanded to transfer Karelia to Finland. It is clear that the Soviet delegation refused. Negotiations failed. The fighting continued. 14-21 July 1920. The Red Army dislodged the last Finnish troops from Karelian territory. The Finns have only two parishes left - Rebola and Porosozero. After new defeats the Finns became more compliant. In addition, hopes for help from the white and Western powers have collapsed. White suffered defeat, and the Western powers themselves did not want to fight with Soviet Russia. 14 October 1920 was signed by the Tartu Peace Treaty between the RSFSR and Finland.

According to the peace agreement, the whole of Pechenga volost (Petsamo), the western part of the Rybachiy peninsula, and most of the Middle Peninsula went to Finland in the North. All the islands, to the west of the bounding line in the Barents Sea, also retreated to the Finns. Finnish troops left Rebolsky and Porosozersky volosts, which returned to Soviet Karelia. The maritime boundary between the two states in the Gulf of Finland was established from the mouth of the Sestra River to Stirsudden, then it went to the island of Seaskari (Forest) and the island of Lavensaari (Powerful) and, turning them from the south, turned to the mouth of the Narova River. As a result, the RSFSR was cut off from access to the international waters of the Gulf of Finland. The Soviet-Finnish border on the Karelian Isthmus was established from the Gulf of Finland along the Sestra River and further northward along the old administrative border of the Grand Duchy of Finland.

In addition, Finland and Russia adopted several decisions of a military nature, which somewhat reduced the level of militarization of border areas. Thus, the Finns demilitarized their islands in the Gulf of Finland; promised to disarm the Eno and Pumola forts on the Karelian Isthmus; they should not have built batteries, the shelling sector of which would go beyond the borders of the territorial waters of Finland; the submarine fleet and aircraft should not be kept in the Arctic Ocean, the size of the surface fleet was limited (15 ships each with a displacement of no more than 400 tons each, the number of ships with a displacement of up to 100 tons was not limited), etc. Both states pledged to keep on Lake Ladoga, and the rivers and canals flowing into it, military vessels with a displacement of no more than 100 tons, armed with cannons of a caliber of no more than 47 mm.

The boundary established by the treaty remained on the whole until the 1940 year. The Moscow Peace Treaty secured a number of concessions to Finland in favor of the USSR.