Operation "divide and conquer" in Ukraine 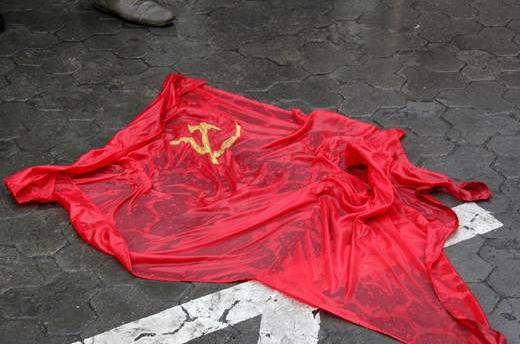 From the most ancient times, the principle of "divide and rule" has been one of the favorite tools for controlling the masses, nations, states. We will discuss the “nationalist”, “fascist” sabbath, which was arranged by the heirs of Mazepa and Bandera in Western Ukraine. Ukro-Nazis in Lviv and in a number of other cities staged mass brawls, disrupted commemorative events in honor of the Victory, ripped St. George ribbons, burned Red banners.

Many overlooked the obvious fact - all this is arranged on purpose, and the main goal is not disrupting the holiday, but something much more serious. Preparations for the “operation” took place ahead of time, there is no need to talk about the “accident” of the incident: first, rumors were spread about the arrival in Lviv of “squads” from the eastern regions of Little Russia who were supposed to show the “zapadentsam” who was the boss in the house; local authorities did not carry out preventive measures, although there was information about upcoming actions, Lviv police did not receive any special means, and normal street patrols were not organized; members of the Svoboda organization, Oleg Tyagnibok, were not prevented from grouping, although it was previously announced that mass events were banned. There is all the evidence that the local authorities did not specifically counteract the impending action until the moment when the process has already begun.

To whom it is advantageous to pit the western part of Ukraine with the East and Russia - two forces are interested in this. The Kiev authorities, represented by Yanukovich and the clans behind him, are “preparing” for the elections to the Verkhovna Rada. Directing, channeling the people's hatred from the authorities, which, like in the Russian Federation, is busy with their own interests and plundering the country, at each other, let them, they say, beat and hate each other, East versus West, letting the West hate Moscow even more, its machinations. After all, Yanukovych actually did not fulfill his election promises - including giving the Russian language the status of the state language (both Russian schools were closed and they were closed). Just the process of “Ukrainization” of Little Russia became less frank. Therefore, Yanukovych and the oligarchs behind him need to catch up with fear in the east of the country, they say, it is necessary to support his party and him personally, and then again the “zapadentsy” will seize power. Although in fact all the leaders of Little Russia worked and work according to the same program - deepening the split between the bleeding parts of United Russia according to the program of creating "Ukraine" and "Ukrainian people".

To believe that the Nazis themselves are behind this, stupid, they are just a tool, stupid, poorly educated people in their mass, are undergraduated, except for the leaders provocateurs who are in the know.

But the oligarchic clans of Ukraine, and of the Russian Federation, are just a tool in more capable hands, who have been weaving the nets of War against Russia for more than one century. The project "Ukraine" "Ukrainians" was not invented by 20 years ago and not by 70, it has been for more than one century, it has been worked on in Poland, Austria, the Vatican. At present, the split between parts of United Russia is being deepened by schemers from London and Washington. They need parts of Russia not to be reunited, so that the population is impoverished, dying out, stupidly, it would be nice if the Russians of the East of Little Russia grappled with those who had forgotten that they were Rus, “Westerners”, the Crimean Tatars rebelled. Preparation of the civil war in Ukraine is in full swing.

The Anglo-Saxons need a lot of blood, they prepare such "mines" all over the planet: Ukraine, the North Caucasus, the South Caucasus, Syria, Egypt, Pakistan, the Korean Peninsula, and so on. Eternal politics - "divide and conquer" ...