15 May 2014
57
Events in Ukraine managed to mix a lot of cards, and the deck of the Black Sea fleet - not the last of them. Held on the eve of the 231st birthday of the Black Sea Fleet, its transition from the position of an unwanted (for Kiev) guest to the position of a full-fledged host has already forced to seriously change plans for the development of the fleet. However, the ensuing sharp deterioration in relations with NATO promises even more serious changes. How the new political realities will affect the image of the fleet is not yet clear, but it is now obvious that the scope of the tasks facing it will increase sharply - and this cannot but affect its planned composition.

The promising appearance of the Black Sea Fleet, which we can judge from the statements of the Russian naval leadership of 2009-12, provided, first of all, the creation of a “fleet of presence” designed to protect Russian interests in the Mediterranean and in African waters - both in the Atlantic and in the Atlantic and in the Indian Ocean. A regular example of such activity can be considered regular anti-piracy patrols in the Gulf of Aden and the nearby seas. Here, on one of the busiest sea routes, ships are constantly located either under the Russian flag or owned by Russian companies. And the presence in the region of the Russian Navy, along with the ships of the naval forces of the NATO countries, brought quite tangible benefits: from reducing the amount of insurance premiums to freeing ships already seized by pirates.

The watch of the African coast is carried by the ships of the Pacific, Northern, and sometimes Baltic fleets. At the same time, located closest to the place of events of the Black Sea Fleet for five years, the Russian anti-piracy mission never sent ships to patrol for quite a banal reason: an acute shortage of modern combat units. In fact, by the year 2010, the only battle ship of the Black Sea Fleet, capable of regularly and fully performing tasks far from its bases, was the cruiser “Moscow”. He is one of the most "built-up" ships of the Russian Navy - the geography of his campaigns from Sevastopol stretches from Vladivostok to Nicaraguan Corinto.

However, one, even if it is very efficient, despite its 30 age, the cruiser cannot replace the fleet, the other large ships of which have an even more respectable age. The renovation plan assumed, first of all, the replacement of obsolete patrol ships and large anti-submarine ships of the Black Sea Fleet with six frigates of the 11356Р / M project. This project is a development of a series of six for the Indian Navy (three + three under 1997 and 2006 contracts) Talvar frigates, in turn, based on the 1135 project widely used in the USSR Navy, combine fairly modern weapons and equipment with the development of basic units and aggregates. The lead ship of the new series, the frigate “Admiral Grigorovich”, launched in winter 2014 of the year in Kaliningrad, is to arrive on the Black Sea this year. 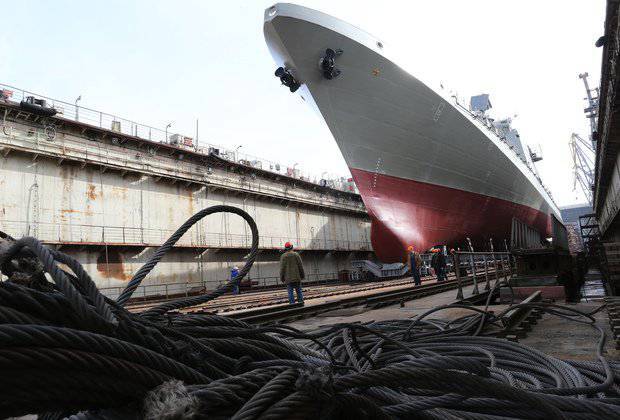 At the same time, it was supposed to modernize (in fact, recreate) the submarine forces of the Black Sea Fleet, from which the only submarine B-871 "Alrosa" of the 877В project "Paltus", also known as "Varshavyanka", has so far remained. At the same time, the B-871 itself managed to survive a period of acute lack of money mainly due to the patronage of the Yakut company of the same name, which affected its name. The new plans included the construction of six submarines of the 636 project - a deeply modernized version of Varshavyanka. The head boat is the Novorossiysk B-261, it should also come to the Black Sea Fleet this year.

At the same time, all new plans were under constant threat of disruption due to the unresolved status of the main fleet base (Sevastopol) and political difficulties in replacing the ship staff even after the 2010 Kharkiv agreements of the year. Construction of the base in Novorossiysk was estimated at 80 billion rubles, but it still could not fully replace Sevastopol, either because of its less convenient location and because of the characteristic features of local meteorology with fierce autumn-winter winds.

Especially strongly based basing influenced the development of the Navy’s water guard and coastal defense forces: Novorossiysk, concealed by Russian naval forces, was not suitable as the main base of the fleet, and Sevastopol as such could not be reliably protected due to restrictions on the deployment of the Russian Armed Forces in Crimea. In part, this was offset by the fact that the threat to the bases and the coast as a whole was considered insignificant: until the last months, the Black Sea was not considered in principle as a potential theater of military operations.

The dramatic change in the political situation in the region made it necessary to overestimate the fleet's tasks and the prospects for its renewal, and in all potential areas of application - from ocean to coastal. Changes began even before the Crimea - Syria, where the Russian fleet for the first time after the end of the Cold War, was forced to perform the tasks characteristic of the period of global confrontation: delivering military cargo to Allies under conditions of rapid cooling of political relations with NATO, which supports the opposite side. conflict. In the summer of 2013, at the peak of military expectations, Russia's presence in the Mediterranean took on an organizational form in the form of the newly created “Naval Task Force in the Mediterranean”, which they simply began to call the “Mediterranean Squadron”.

Cooling did not turn into an armed confrontation, but it should be understood that in the event of a real conflict with the North Atlantic Alliance, Moscow’s military tools in the Mediterranean would be extremely limited. Relying on strategic nuclear forces does not guarantee the impossibility of local collisions in which the use of a nuclear arsenal cannot be justified.

Thus, during the Syrian and then the Ukrainian crisis, the range of potential tasks of the Black Sea Fleet and the Russian squadron in the Mediterranean Sea gradually changed, and eventually came to the following form. In the far sea and ocean zone, the fleet needs potential sufficient to counterbalance / block / neutralize / disable if necessary 1-2 US Navy aircraft carrier strike groups operating with the support of NATO allies. In the Black Sea, including in the coastal waters of the Crimea and the Caucasus, the issue of protecting the coast and bases suddenly came to the fore, both in the case of a hypothetical military conflict and in view of the likely increase in the activity of special services and terrorist organizations.

Radical changes in the plans for the construction of the Black Sea Fleet, however, did not happen, including due to the characteristics of the new generation ships. Universal ship firing systems (UKSK) allow new frigates, if necessary, to solve any problems - from shelling coastal targets with long-range cruise missiles to attacking an aircraft carrier with the help of supersonic anti-ship missiles. Led by "Moscow", which in the coming years will be renovated with modernization, and with the support of aviation and light forces, six new frigates represent more than a serious force on the Black Sea, and can become the core of the Mediterranean squadron. In addition, in the future, the Black Sea Fleet is likely to receive at least two promising destroyers that can replace Moscow.

The situation with the submarine forces is even simpler - for the new Varshavyanok, the task of fighting the naval forces of a potential enemy was defined as the main one even before the onset of any aggravations, and today it’s only a question of whether the Black Sea Fleet has enough six new boats or this number is to be increased. So far, no consideration has been expressed on this score, but it is possible that in the new conditions the Black Sea Fleet will receive more submarines than previously thought.

More serious changes await light fleet forces, aviation and coastal defense forces. At present, the option of introducing into the Black Sea Fleet the first small rocket ships (MRK) of the “Buyan-M” type, originally built for the Caspian flotilla, is already being considered. These ships are able to replace the IRAs and rocket boats of Soviet construction, and the use of the same UKSA, as on frigates, makes the “Buyan-M” universal, if not considered practically absent, due to the simplification and cheapening of the ship, the capabilities of the struggle with submarines. 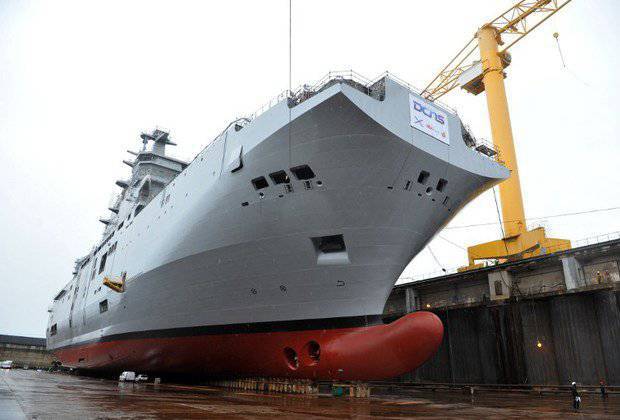 The fight against submarines is likely to be placed on promising corvettes of the 22160 project, an order for which has recently been increased especially for the Black and Mediterranean Seas.

The most radically changing aviation and ground grouping in the Crimea, including the forces of both the Navy and other types of Russian Armed Forces. Some idea of ​​the scale of change is already provided by the deployment of the C-300PM2 air defense systems and the Bastion coastal missile systems in the Crimea. The next stage should be the renewal of Russian aviation in the Crimea, before the latest events presented by one regiment of obsolete Su-24 bombers at the Guards air base, and the same helicopter regiment on the Ka-27 marine vehicles based in Kach. The most likely contenders for the Crimean bases are the Su-30CM fighters and the Su-34 bombers actively procured by the Ministry of Defense. With sea helicopters, the situation is more complicated, but the timely repair of existing ones may allow us to pull out time before the appearance of new cars of this class.

It’s too early to make predictions and estimates. However, it is obvious that the changing situation changes the purpose of the fleet. The implementation of new plans will give Russia a reliable tool to protect its own coast, both in close proximity and at long distances. Among the many roles of the Black Sea Fleet, one can hardly find a more well-studied one.

Ctrl Enter
Noticed oshЫbku Highlight text and press. Ctrl + Enter
We are
Military reform as an integral part of the security concept of the Russian Federation: Systematic dynamic assessmentNikolay Silaev, Andrei Sushentsov: Georgia after the elections and prospects for Russian-Georgian relations
Military Reviewin Yandex News
Military Reviewin Google News
57 comments
Information
Dear reader, to leave comments on the publication, you must sign in.