15 May 2014
5
In recent years, the world economy has confidently emerged from the crisis, with the exception of the EU countries. Considering globalization, Russia itself felt this too - in the form of high energy prices and rising demand. It is the economic situation in the USA (recovery) that has largely formed a positive in the world economy and will largely determine the situation further. In the same way as the negative in the US economy 2007 – 2008 of the years formed a collapse in other countries. Therefore, the US economy is, in a sense, a leading indicator of global processes that should be used. At the moment, the situation is such that the United States is reaching its pre-crisis highs, pushing the world economy together with China. However, given that at stake is the progress of the entire global economy, this US phenomenon should be analyzed more deeply.


Usually, to understand the state of the economy, it is convenient to look at the dynamics of GDP and unemployment, but there is an opinion that these data are manipulative to some extent, so it’s better to look at the related indicators: industrial production and employment in the US labor market, which can also reflect the economic situation well. situation and provide data for conclusions.

US industry: the crisis is over

Despite the fact that the main share of the US economy is services, industry plays a significant role. Therefore, there are constantly heard calls for the return of industry to the United States and other ways to stimulate it — for example, through low prices for natural gas.

Industrial production played a crisis decline and exceeded the pre-crisis maximum (December 2007 of the year). It is important to note that this is not an accidental surge, and it can be stated that stable growth is continuous. It is also worth noting that the production volumes are considered not in money value, but in kind, which improves the reliability of the indicator, since it does not depend on prices: 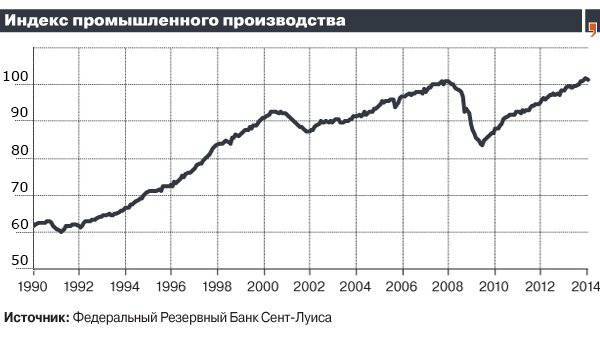 On the one hand, it is possible to talk about positive data, after all, all five post-crisis years, there is growth and the pre-crisis maximum has been exceeded. If you look at it with a wider view, then almost seven years have passed since the maximum (which is the 2007 year). It turns out that seven years have passed without progress. Years of stagnation, and it is still unknown what will happen next. At the moment, the situation is such that the United States is even ready to loosen its geopolitical grip for the sake of developing its own industrial production - they do not provide permits to export natural gas from its market, which holds back ultra-low gas prices for the sake of industry. Therefore, to date, the United States prefers to scare Gazprom exclusively verbally.

Labor market: there are improvements, but there is no full recovery

With unemployment and employment, the situation is more complicated. Unemployment has fallen sharply since the crisis times, however, these data are being questioned, since in the US the economically active population is declining (from which the unemployed are counted) with a simultaneous population growth. At first glance, it seems that these two trends contradict each other and manipulate statistics, but this is only at first glance. The US population is rapidly aging due to the post-war birth boom (the so-called “baby boomers”), and the proportion of elderly people and retirees among the population is increasing, while the proportion of non-retirees, respectively, is falling. This, in part, explains the fall of the economically active population with the growth of the entire population. Over the past 7 years, the population from 55 years and older has added 16 million people, while the size of the 25 – 54 group of the year has even decreased slightly (by 2 million).

For a complete understanding, it is worth taking a look at the above in the complex: 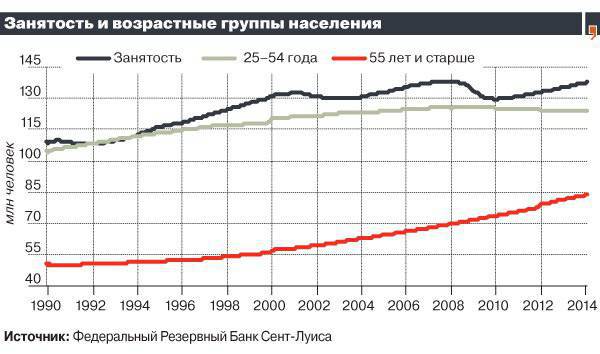 Employment is at the level of the pre-crisis maximum of 2007 of the year, gaining those 8 millions of jobs that were lost during the crisis. If you pay attention to the ratio of the 25 – 54 age group in the population and employment in the economy, it is clear that it is the same as 6 years ago. However, given that the 55 + group still partially works and increases its share of employment, unemployment has not yet reached its pre-crisis minimum. For a more detailed study of this issue and high-profile conclusions, a separate article is needed, but our task is to note the pre-crisis employment.

It is also worth adding that the GDP and retail volume, adjusted for inflation, passed the pre-crisis highs for quite some time, but we will not dwell on them in detail.

That is, today the situation is rather positive, which largely determines the positive both in the global economy and in Russia (nevertheless, oil is not $ 33 a barrel, as it was in the 2009 year, but about $ 110). However, only part of the problems have been solved and / or postponed, and the situation cannot be called favorable. At the same time, it is obvious that growth will not be eternal and sooner or later the negative will come to the US economy. It is unlikely that the world economy will not react to it, which promises tangible problems for Russia.

However, free cheese is only in a mousetrap. These improvements, although great, are not systemic, since the US economy simply shifted problems from one sector to another. This "other" has become the public sector.

How did you manage to return to the pre-crisis highs, and what are the prospects?

Over the past decades, the credit model of economic development has meant an increase in the debt burden and, accordingly, an increase in consumption. Money came out of nothing, wasted, increasing demand, and all had to each other. But it is worth noting that this model still worked perfectly, and for decades. Credits themselves became the economic air that everyone breathed, without which consumption growth, and consequently, the economy, was impossible. And it seems that at the end of 2000 the model began to collapse, but let me, where did the pre-crisis highs come from?

To understand, you should not mix everything in a heap, but you should break the credit model into sectors. Before the crisis, credit debt (and, consequently, consumption, demand) increased the household sector (mainly mortgage), financial, non-financial. But the public sector, which is important, reduced its debt (the debt of the federal government). That is, all of the credit model — the debt burden — fell on the sectors listed above, while the public sector “healed” its debt burden, reducing the burden. This is reflected in the conditional “1 Phase” (before 2008) on the chart: 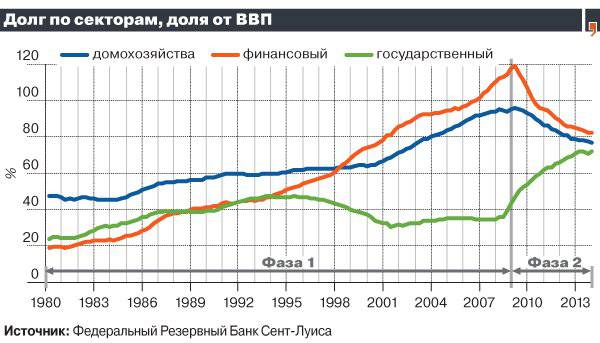 After the crisis, the sweet “1 Phase” ended in the credit model of the US economy, and a group of sectors had to reduce the debt burden (or slow down its growth rates) and, consequently, reduce their expenses, as money stopped appearing from nowhere. When all the main sectors reduce costs and nobody buys anything from anyone (demand drops), then where can profit come from? She is not. But this tragic play was corrected by the main character - the public sector, starting in 2008 in the year the conditional “2 Phase” on the chart. When everyone stopped borrowing and spending and the credit model of the economy seemed to roll to the bottom, then the entire burden of the model, that is, the growth of debts and expenses, had to be assumed by the public sector, which had rested and gained strength for the previous two decades.

Since the public sector was taking the rap for almost everyone else, then the buildup of its debt load (including through the “printing press”) was gigantic. It was necessary to compensate for the reduction and deceleration of the debt burden of other sectors in the amount of trillions of dollars, while adding something above this amount to the growth of the economy: if no one is wasting their loans, how can the economy grow?

In fact, nothing happened with the credit model of the economy - the entity that takes on the debt burden has just changed. Before 2008, these were households, the financial and non-financial sectors, and after that - the state. While the public sector bears the burden of debt and expenditure for the entire economy, other sectors are recovering and are waiting for their turn to change the public sector in this battle with the difficulties of the credit model of the economy and continue to grow the economy. At present, households and the financial sector have managed to reduce their debt burden to the levels of 2002 and 2001, respectively. In the future, they are likely to be able to increase their debt burden again. It is also worth noting that this is, of course, a somewhat simplified picture for clarity, without a non-financial sector, which has not significantly changed its load either before or after the crisis, and without other clarifications, since the picture will not fundamentally change.

Whether the American economy will manage to turn this adventure around and consolidate its growth - we will know in the short term. The fact is that the troika of sectors rather slowly reduces its debt burden, and whether it can change the public sector in the role of increasing borrowing and spending is a question. But if they do not succeed, then it will not find it enough for anyone, and many still cringe at the memories of world economic processes in 2008 – 2009. If the change of the public sector to other sectors in terms of growth of debt burden and expenses occurs successfully, then, on the one hand, this will be an instructive lesson that the enemy cannot be underestimated, and on the other, the world expects continued growth, which will affect us. Nevertheless, many countries are trying to reduce the dependence of their economies on the United States, but so far progress is small.

Ctrl Enter
Noticed oshЫbku Highlight text and press. Ctrl + Enter
We are
Way out of chaosWhat we lost
Military Reviewin Yandex News
Military Reviewin Google News
5 comments
Information
Dear reader, to leave comments on the publication, you must sign in.