15 May 2014
50
Comparison of military equipment of different countries is an interesting, but ambiguous exercise. A simple comparison of the stated characteristics, by definition, cannot lead to the correct answer to the question, whose equipment is better, since it does not take into account a lot of important factors (the role of technology in the structure of the troops, skills of the people controlling it, etc.). Nevertheless, new and new comparisons continue to appear. A few days ago, the Chinese military portal Mil.news.sina.com.cn published its version of the comparison of two modern aircraft.


The attention of the authors of the portal attracted two aircraft of the largest countries in Asia: India and China. Their task is they made a comparison of the Indian fighter Su-30MKI and the newest Chinese Shenyang J-16. China and India are fighting for leadership in the Asian region, and Su-30MKI and J-16 are the newest combat aircraft of their air force. According to Chinese authors, the comparison of these two aircraft can be of great interest. 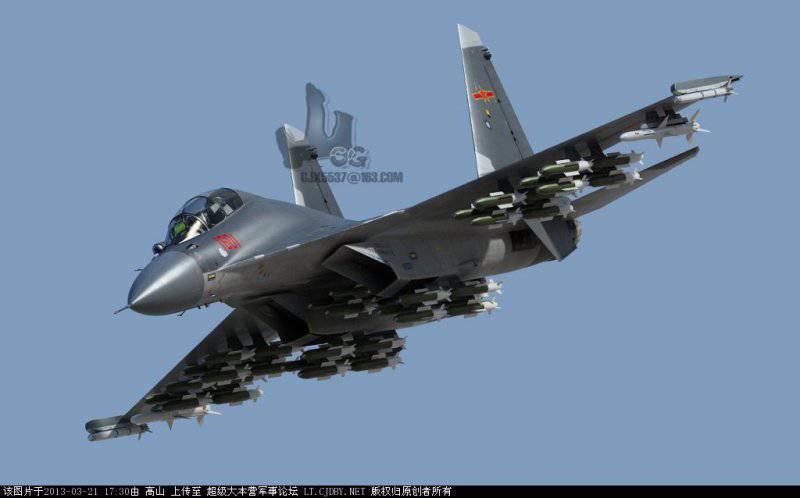 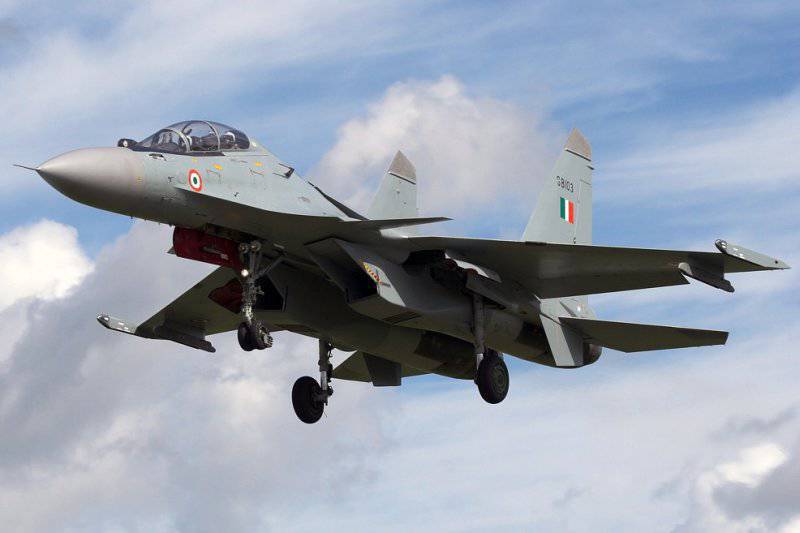 Without wasting time on a general description of the two aircraft, the authors of the Mil.news.sina.com.cn portal noted that the Chinese fighter Shenyang J-16 has two main advantages over the Indian rival. The first of them is onboard electronic equipment. The Chinese J-16 aircraft carries an onboard radar station (radar) equipped with an active phased antenna array (AFAR). It is known from open foreign sources that the J-16 aircraft radar has an antenna with a diameter of about 1 meters with 2000 receiving-transmitting modules. The maximum antenna power is 6 kW, the average is 2 kW. Su-30MKI fighters of the Russian and Indian assemblies, in turn, carry the Bars NXNX Bars radar with a passive phased antenna array. The maximum power of the Bars station is also equal to 011 kilowatts, but the average power is at the level of 6 kW.

Based on the difference in power and antenna types, Chinese authors conclude about the superiority of the J-16 fighter. However, they note the importance of superiority in the average radiation power. This means that the Chinese aircraft J-16 will be able to detect the Indian Su-30МКИ before it enters the zone controlled by it, and will get some tactical advantage.

The second important feature of the Shenyang J-16 aircraft is its weaponry, namely the air-to-air missile PL-10. It is argued that this rocket has combat advantages due to the use of an infrared homing head with a resolution of 128x128, its high sensitivity, engine thrust vector control and other design features. With all this, the PL-10 rocket can reliably hit various types of air targets and is also protected from interference.

The authors of the portal Mil.news.sina.com.cn recognize that the Indian Su-30MKI aircraft has not only disadvantages, but also advantages. Its main advantage is the front horizontal tail. Thanks to him, the Russian-designed fighter has higher flight characteristics, primarily better handling and maneuverability. However, additional planes significantly increase the visibility of the aircraft for radar stations.

An interesting feature of the fighters Shenyan J-16 and Su-30МКИ is their "origin". Both of these aircraft are in fact the development of the Soviet / Russian Su-27 fighter, because of which they have a number of common features. For example, due to the presence of a double cabin, Chinese and Indian fighters are about a ton heavier than the “base” Su-27, which accordingly affects their thrust-to-weight ratio. It is noted that the FWS-10 and AL-31FP engines (two on each aircraft) provide the fighters with approximately the same afterburner thrust at the level of 25 t.

The specific combination of take-off weight and thrust of the engines affects the ammunition volumes of both aircraft and, as a result, their combat effectiveness. However, these disadvantages are common and are unlikely to affect the results of the comparison. In the context of thrust and engines, the prospects for the development of two fighters are also mentioned. According to the authors of the site Mil.news.sina.com.cn, to significantly improve the performance of the aircraft, the Chinese engine should have thrust at the afterburner at the level of 14 t. In addition, the “Super Dry” project is mentioned, in which new and then existing in the army, Su-30MKI fighters can get a new radar with an active phased antenna array and more powerful engines.

China and India are fighting for the title of regional leader, while the front-line aviation (in particular, J-16 and Su-30MKI fighters) are one of the instruments of such a struggle. Therefore, as the authors note, the development of aircraft and their rivalry will continue.

A comparison of two aircraft, carried out by the portal Mil.news.sina.com.cn, is of some interest. However, such an “analysis” of the capabilities of the Chinese and Indian fighters has not been without slyness, which is typical of comparing any equipment of its own production with foreign ones. As far as is known, the Su-30MKI and Shenyang J-16 fighters, being different variants of the development of the Su-27, have approximately the same size and weight characteristics. The same can be said about the well-known flight characteristics: the maximum speed of both aircraft reaches 2100 km / h, the flight range - up to 3000 km.

The built-in armament of the two fighters consists of one automatic 30 caliber mm gun, and for the suspension of rockets and bombs 12 units under the wing and fuselage are used. The total weight of the suspended weapons is up to 8 tons. Aircraft can carry guided and unguided rocket and bomb weapons of various types used in the Chinese or Indian air forces.

Noticeable differences between the two aircraft are available in the onboard electronic equipment. As already mentioned, the Chinese fighter is equipped with a radar with AFAR, while the Indian uses a station with a passive phased antenna array. Because of this, the Chinese J-16 should have higher target detection and tracking performance. However, the exact ratio of the characteristics of the two radar stations for obvious reasons is unknown.

To consider another feature of the comparison of two aircraft, we should recall a similar history from the recent past. In the 2012, the Chinese press published a comparison of the newest deck fighter Shenyang J-15 with the Russian Su-33, which is considered the “ancestor” of the Chinese machine. Then it was claimed that the Chinese J-15 is not inferior in some characteristics, and even surpasses the Russian fighter in some. Indeed, the Chinese aircraft designers managed to create a carrier-based fighter, comparable in their capabilities to the Soviet / Russian Su-33. However, the Su-33 first flew in August 1987 of the year. The Chinese J-15 made its first flight at the end of the summer of 2009. Thus, the aviation industry of China managed to repeat the successes of Soviet colleagues twenty years ago. This can also explain the superiority of J-15 over Su-33.

Su-30MKI fighter was created by Sukhoi on the request of the Indian Air Force in the mid-nineties. The Su-30MKI prototype took to the air in 1996 year. In 97, the customer received the first serial fighter of the new model. Fighters for the Indian Air Force are built by the Russian and Indian (licensed) aviation industry. To date, the military received about two hundred aircraft. By the end of this decade, their number should increase to 270.

The existence of the Chinese fighter Shenyang J-16 became known in the middle of the 2012 year. One of the prototypes of this aircraft got into the camera lenses. Since then, the Chinese aviation industry has completed the tests and fine-tuning of the fighter, and also began its mass production. Earlier this year, at least 24 aircraft of the new model was reported. Apparently, J-16 has already begun service in the army.

Thus, two and a half dozen planes share a dozen years, which can tell a lot about the development trends of the aviation industry in Russia, India and China. In the first place, this suggests that China is still lagging behind its competitors, although it is making constant attempts to catch up with them. Unfortunately, the lack of information about the latest Chinese fighter does not allow us to confidently talk about the real relationship between the characteristics and capabilities of the aircraft of the two countries. However, it should be noted that the Indian Su-30MKI, despite the use of radar without AFAR and the absence of PL-10 level missiles, have an indisputable numerical advantage.

China in the very near future will try to get rid of the lag in quantitative terms with the help of mass batch production of new technology. It is already known how India will respond to this step. The Super Sukhoi modernization program should improve the characteristics of the Su-30MKI fighters available and planned for construction.

The opinion of the authors of the portal Mil.news.sina.com.cn about on-board electronics or arming two fighters is ambiguous. You can agree with him, but you can deny it. However, the Chinese authors made the right conclusion. India and China, claiming to be the regional leader, are not going to abandon the development of their air force in general and front-line aviation in particular. This means that the rivalry of fighters will continue.