"It's time to sit everyone at the same table" 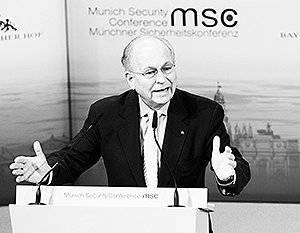 “In the West, many are shocked by the results of the Donetsk and Lugansk polls. Talking about this, that all this is complete bullshit and manipulation, is difficult, because the mass of journalists visited the field and saw everything with their own eyes, ”political analyst Alexander Rahr told THE VIEW. So he described the mood in the West after the referendum in the east of Ukraine.


As the newspaper VIEW reported, Kiev accepted the OSCE’s proposal to appoint a moderator of the internal Ukrainian dialogue from the OSCE.

“I am pleased to inform you that the Ukrainian government accepted our proposal to appoint Ambassador Wolfgang Ischinger as co-moderator of these OSCE round tables,” said OSCE Chairman, Foreign Minister and President of Switzerland Didier Burkhalter on Monday.

“We proposed that the Ukrainian side should appoint a moderator and co-moderator for the national dialogue, and that the dialogue should also be moderated by the OSCE. We hope that today someone will be named from the Ukrainian side, and from our side there is also a person whom we will call today, ”Burkhalter explained earlier.

On whether Wolfgang Ischinger can cope with the peacekeeping mission in Ukraine, the German political analyst Alexander Rahr told the newspaper VIEW.

VIEW: Alexander Glebovich, is it true that Wolfgang Ischinger, appointed by the OSCE moderator, has a reputation as a moderate politician? Against the background of other Western politicians, he has not allowed himself lately harsh attacks on Moscow ...

Alexander Rahr: The OSCE is an organization in general that should take into account the opinion of Moscow; there is no status of elder and younger brothers. This organization, which, unfortunately, has been in such a deplorable state in recent years, because the Americans did not particularly support it and did not want to see an alternative to NATO in it. But, unlike NATO, the OSCE has all the competencies and all the levers to improve European security. And the Ukrainian conflict is the most acute conflict in Europe over the past 15 – 20 years.

I remember that in the Kosovo war, the West pushed him as the main negotiator. Ischinger represented all sorts of organizations in the UN and the OSCE. Behaved very objectively, unlike other young politicians, so the fact that the former major diplomat got this role is very encouraging.

Over the past three years, he gained very great prestige as the organizer of the security conference in Munich - a very strong influential organization that became the main platform for discussing the pressing problems of world politics. Once a year, Americans, Russians, Iranians, and Chinese come there. Higher level does not come up with than hers. Therefore, Ischinger has connections, and most importantly, he has grown into the role of an effective moderator.

VIEW: Is it possible to say that the rhetoric of the West against Kiev in recent days has begun to change? For example, in a joint statement by Merkel and Hollande in Stralsund, for the first time, open claims were made not only towards Moscow, but also towards Kiev ...

A.R .: I think it’s just the time to finally get everyone sitting at the same table. Of course, the West protects the Kiev government, which depends largely on the West, but it’s just time to force the Ukrainian government to take certain steps to the future, to improve relations with the East and with Russia, to ensure free and fair elections.

Yes, in the West, many are shocked by the result of the Donetsk and Lugansk polls. Talking about this, that all of this is complete bullshit and manipulation, it is difficult, because the mass of journalists visited the field and saw everything with their own eyes. It was a massive vote.

In the West, they began to realize that only Moscow cannot be blamed, that Russia should be allowed to do what it wants in the East so that recent events do not recur, and tomorrow it will be necessary to build relations between the central government and the eastern regions of Ukraine. This will be one of the subjects of the negotiations that the OSCE diplomats must ensure; this is the beginning of the implementation of the agreements that were reached in February between the opposition and Yanukovych.

Maybe Yanukovych will not return his power, but it is necessary to disarm not only the formations in the East, but also in the West, we must begin a constitutional reform and turn Ukraine from a central state into a federation. The faster it all goes, the faster the situation will calm down.

Until now, the West and Kiev viewed this initiative as Moscow and did not want to play along with Russia. But now comes the understanding of all sensible politicians that there is no other way out and the federalization of Ukraine will calm the situation down and not aggravate it.

VIEW: OSCE Secretary General Lamberto Zannier last week offered Kiev to find an authoritative figure, for example, the former president of the country, to organize a national dialogue. Could this be, for example, Leonid Kuchma?

А.R .: It is very difficult to say about an authoritative figure in Ukraine. There is no such figure today. Kuchma, perhaps the most suitable figure of those who can be represented ...

I hope for the appearance of a simple Ukrainian, not even a politician who can find a common language with the West, the Center and the East of Ukraine. This may be a spiritual leader, a person of art or an experienced writer and publicist. But this is so far difficult to imagine. This is the right way to find a national leader who could raise the country.

VIEW: The OSCE, within the framework of its roadmap, offers assistance in the negotiations on the disarmament of illegal formations, establishes a foundation for these purposes and promises to send international disarmament experts to Kiev urgently. How effective are such measures? Will it be about disarming the Donbass militias, or will they not “forget” about the “Right Sector”, the “Oleg Lyashko’s battalion” and similar formations?

AR: The OSCE has no troops. Are they going to send observers? .. This is the most difficult question for Ukraine. I think we need to start with disarmament. This can only be done by the Ukrainian government.

Ctrl Enter
Noticed oshЫbku Highlight text and press. Ctrl + Enter
We are
What you didn't want to know about EnglandInterview by President Bashar Al-Assad to the Sunday Times
Military Reviewin Yandex News
Military Reviewin Google News
41 comment
Information
Dear reader, to leave comments on the publication, you must sign in.