Compromise between opportunity and necessity

15 May 2014
14
The development of the armed forces depends on the economic potential of the Russian Federation and the geopolitical situation.


When embarking on the construction of any capital construction, its intended purpose is determined in the project, and not at the end of the process. This thesis is very obvious in the construction industry, but in the military for some reason it is necessary to prove it. With the submission of the weekly "Military Industrial Complex", a broad discussion of new approaches to the construction of the Armed Forces of the Russian Federation is conducted. I would like to make my contribution.

Before building, the goal is determined, what and by what time to do, how much force, material and financial resources are needed for this, geological and other surveys are carried out. All activities are displayed in the project facilities, the relevant material and financial documents. The construction of the object begins not from the roof, but from the foundation.

The same algorithm is valid for the military sphere. The armed forces are a multispecific, multi-level socio-technical combat system that cannot be built from the roof without defining their purpose, tasks that are assigned in peacetime and wartime. The assertions are wrong that it is not necessary to define these tasks on the basis of a long-term forecast of the military-political situation, the determination of probable opponents and the balance of forces of the parties. Accounting for these factors in the construction of the armed forces is not at all a utopia, and common sense in the construction of the Armed Forces of the Russian Federation is not limited by taking into account the possibilities of the country's economic complex.

Formation of an armed defense plan

Apparently, it is impossible to cut from the shoulder, to destroy everything that was accumulated in the theory of the construction of armed forces in the past. This theory, as well as other branches of military sciences, now proposes classical approaches to the development of the armed forces of any peace-loving non-aggressive state. It should be noted that this process consists not only in the deployment of the required combat and numerical strength, but also in the construction of other equally important elements of their appearance. 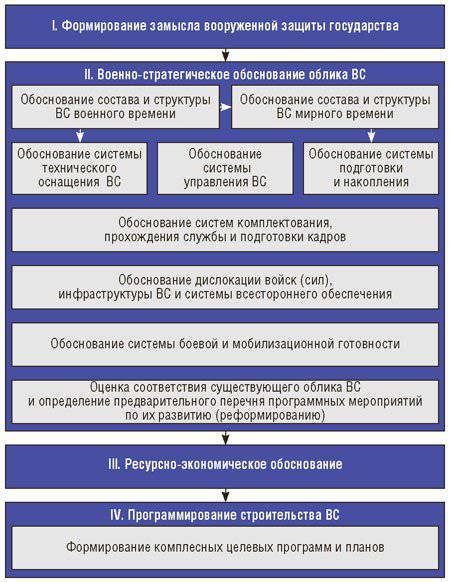 Consequently, in order to build modern armed forces capable of ensuring the defense capability of the state, it is necessary to carry out a comprehensive military and economic substantiation and planning of their appearance for the foreseeable future. This rationale is understood as a study performed using scientific methods, in which, based on the criteria of military-strategic and resource-economic feasibility, the armed forces are projected to correspond to the concept of armed defense of the state and its economic capabilities.

Let's try to consider its content in a popular form. The military-economic substantiation of the Armed Forces is one of the most complicated problems of the theory and practice of their construction. This problem has always been in the field of view of military science, which, in relation to the specific military-strategic and economic conditions for the development of the state, found appropriate and justified possible solutions for it. Naturally, at the basis of this justification lay possible military threats to vital national interests, a plan for strategic deterrence of a potential enemy and armed defense of the Fatherland, as well as economic and mobilization capabilities of the state. In the past, the appearance of the Armed Forces was formed under the most complex version of the reflection of aggression. Of course, this approach corresponded to the doctrinal guidelines of the military-political leadership of the country and was supported by the powerful economic base of the state, which allocated as much material, financial, human, and other resources for defense as was required.

For the conditions of the modern period of the socio-economic development of Russia, such an approach is unacceptable from the economic and inexpedient from the military-strategic point of view. In conditions of limited allocations for national defense and limited number of the Armed Forces of the Russian Federation must correspond to the economic and mobilization capabilities of the country in their costs of maintenance and development. This is on the one hand, and on the other - to be adequate to the needs of ensuring its defense and military security. It would seem that two contradictory requirements that are incompatible with the simultaneous implementation. This is the essence of the military-economic substantiation of the perspective appearance and the art of building the Armed Forces - to combine the strategic aspects of construction with the economic ones. That is, it is necessary to find a compromise between what kind of armed forces a country needs and which countries can afford.

In many countries, planning the construction of the armed forces is decided by methods of program-target planning, the main stages of which are shown in the figure.

Such stages can be:

First of all, proceeding from the forecast of the development of the military-political situation for the prospective period, possible military dangers (threats) identified and as a result potential and real opponents, developed scenarios for the unleashing and predicted nature of military operations against the Russian Federation, a plan of armed defense of the state is developed.

In our opinion, it should be built on simple and understandable grounds: “We don’t need someone else’s land, but our own should be reliably protected by all available means and methods.” Proceeding from this, the intent of the armed defense of the Russian Federation should be understood as a set of ideas, approaches, ways of solving the tasks of strategic deterrence of potential adversaries from unleashing any scale of aggression against Russia, preventing it, and in case of a start - reflecting, localizing and terminating on the terms of the Russian Federation .

Therefore, such complex elements of the state structure as the Armed Forces, other troops and bodies of the Russian Federation, the defense industrial complex, which form the basis of its defense, cannot be built on the basis of current problems only. Military construction in Russia should also proceed from the prospective needs of ensuring the state’s military security, taking into account possible threats that it may face in the next five to ten years and beyond.

Otherwise, the intent of the armed defense of the Russian Federation can be developed by a narrow circle of people without proper forecasting and comprehensive justification, be determined only by the complexities of the current political and economic situation, which can exacerbate existing problems and in the future lead to major political, economic, military and social consequences. A striking confirmation of this is the defense construction in the Russian Federation in 2008 – 2013, when the dangers and possible military threats were assessed incorrectly and thus caused a huge damage to security.

Once again on the terminology

Thus, when developing the concept of armed defense of the Russian Federation, it is necessary to clearly understand the content of the concepts of “military danger” and “military threat”, from where they come from and from whom they originate. We will understand these concepts.

Under the danger refers to the state of relations between states in which there is a potential, and under the threat - the real possibility of a military conflict. The main factors responsible for this danger are that the parties have significant contradictions in ensuring (defending) their vital national interests and prepared military force, and the distinctive features of the state of threat are the presence of antagonistic contradictions, sufficient military force and declared political intentions and at least one will. of the parties to apply this force. In the first case, the opposing sides are potential, and in the second - real opponents.

At the same time, the presence of a military danger or military threat does not mean the presence of a threat to the security of the state. It is impossible to objectively assess the military danger (threat) only on the basis of the intentions and military power of the aggressor. He needs to have confidence in the successful implementation of his plan. That is, the fact of the unleashing of hostilities by the aggressor does not mean that these actions will be successful and he will reach the goal.

It is appropriate to give an example of today's relationship with Ukraine. Yes, this country represents a certain military danger for Russia. But it does not represent a threat to military security, because despite the presence of antagonistic contradictions and, apparently, a certain desire to use military force, the Ukrainian armed forces do not have sufficient military or other power to resist Russia. However, Kiev’s aspiration to join NATO should be considered not only as a serious factor in the increase of the military threat, but also as a factor in the exacerbation of the military-political situation in the center of Europe. Proof of this are the events of the year 2008 in Georgia and South Ossetia.

Thus, when developing a plan for armed defense of the state, it is important to objectively assess the state of the state’s military security system and, above all, the state of combat readiness of the armed forces.

Based on the above, the content of the formation of the idea of ​​armed defense of the state is:

Based on the conclusions from the forecast of possible military threats and possible scenarios of their implementation, assessing the state of the system to ensure military security and state protection from forecasted military threats, the organization’s defense plan and a system of military and non-military measures to counter these threats in peacetime and wartime are determined.

Ctrl Enter
Noticed oshЫbku Highlight text and press. Ctrl + Enter
We are
Way out of chaosMilitary reform as an integral part of the security concept of the Russian Federation: Systematic dynamic assessment
Military Reviewin Yandex News
Military Reviewin Google News
14 comments
Information
Dear reader, to leave comments on the publication, you must sign in.