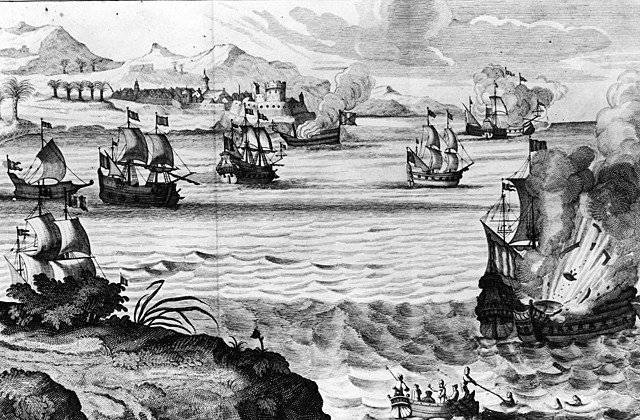 How the sea robbers of France, England and China managed to occupy government posts and maintain brothels
12 May 1694, the British seized a frigate of the French corsair Rene Dyuge-Truin, and the crew members who remained after hours of battle were captured and taken to Plymouth Prison. Unlike pirates, corsairs had the official permission of the authorities of their country to attack ships of foreign states, but they both engaged in sea robbery. "Russian Planet" talks about people who have earned fame on the sea.

Rene Dughet-Truin was born in 1673 year in Brittany, in the city of Saint-Malo. His father, a rich shipowner, was preparing the future of a priest for his son, but from childhood he was drawn to the sea. After the death of his father, Dughet-Truin abandoned his previous studies and fled to Paris, where he was safely squandering his inheritance. One day, the parents of his beloved friend wanted to give their daughter as their wife to another, and Dughet-Truin stabbed a competitor to a duel. The family of Dughet-Truenov realized that it was necessary to do something with the crazy heir, and the elder brother of the young man identified him as a volunteer for the corsair ship Trinite. Two years later, the 19-year-old Dughet-Truen was entrusted with the command of the Danikan vessel carrying the 14 guns. 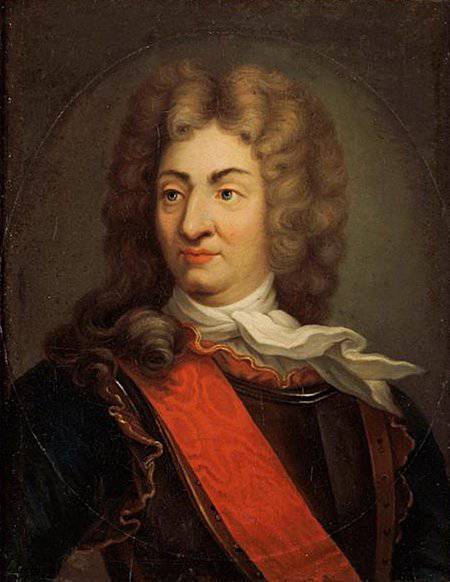 At that time, France was fighting the League of Augsburg. Dughet-Truien was lucky, and he captured a lot of enemy ships. In 1692, the king of France appointed the young man as the captain of a forty-cannon ship, on which Dughet-Truin cruised off the coast of Ireland, meeting with British and Dutch ships. The young captain met his hopes: he destroyed four British ships and captured two merchant ships with valuable cargo. In the 21 year, the corsair who had not suffered a single defeat was already commanding five ships.

Failure overtook him in May 1694. The frigate "Diligence", commanded by Dughet-Truin, was surrounded by six British warships, and the wounded captain was forced to surrender. In the Plymouth Prison, he was treated better than ordinary prisoners: corsairs, unlike pirates, had a chance to escape the gallows and be exchanged for prisoners of war. In addition, a worthy battling opponent was supposed to be respected. During his imprisonment, Dughet-Truin managed to make many acquaintances. Among them was a local market vendor in love with a French refugee. The captive captain promised to arrange a date for them and ran away as soon as he left the prison. Already, 16 Jun Dugue-Truin with several comrades was returning to France on a ship purchased in advance for escape.

In 1696, Dughet-Truin was officially accepted into the royal fleet with the rank of captain. Until the end of the war, he continued to seize and rob English ships, and then retired for several years. Services renowned corsair again needed when the war began for the Spanish inheritance. By 1709, the Düge-Truen account included 16 warships and 300 trading ones.

In 1710, the shipbuilding business of the Dugues-Truen family was on the verge of bankruptcy due to an unsuccessful campaign to seize Portuguese ships. Then the corsair and his older brother proposed to the Minister of the Sea fleet Rio de Janeiro capture project to get a ransom from the city. Louis XIV gave his consent, and in June of the following year 17 ships left the various ports of France, on which there were a total of 738 guns and more than six thousand crew members. In September, Rio de Janeiro was captured. At first, the city governor refused to pay, but the Buccaneers forced him to cede. The French returned home with a booty worth 4 million pounds.

Subsequently, Dughet-Truin commanded the fleet in various cities of France, without a fight, forcing Mediterranean pirates to accept the terms of their government. He died in the 63 year in the rank of lieutenant general of the fleet, leaving behind a memoir that was published in the 1740 year.

The true facts of the biography of many history Pirates can be difficult to establish, because their lives are often shrouded in mystery and over time become overgrown with legends. One of the sources of information about the buccaneers is the book “Pirates of America” by Alexander Olivier Exvemelin, first published in Dutch in 1678. The origin and biography of the author of this work has not yet been precisely determined. In addition, translations into other European languages ​​in the 17th century are very different from each other and even contain new details. The German edition of 1679 of the year dubbed the author A. O. Nürnberg, in the reprint of 1803 of the year he began to bear the name Joseph. In English, "Pirates of America" ​​were published in 1684 year. 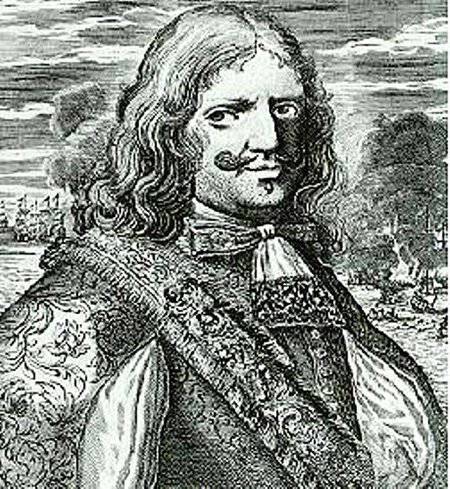 Thanks to Ekskwemelin, the fame of the most famous pirate of the Caribbean went to the Englishman Henry Morgan, with whom he participated in the robberies. When the pirate read the English version of his biography, he was terribly outraged and sued the publishers William Crook and Thomas Malthus for libel. In 1685, they were sentenced to pay compensation and correct false facts.

Henry Morgan was born to a Welsh landowner in 1635. He did not want to continue the business of his father and hired on a ship that went to Barbados. According to Ekskvemelin, when the ship arrived at its destination, "Morgan, according to English custom, was sold into slavery," but the pirate himself denied this fact. Three years later, when Morgan allegedly worked his crossing across the Atlantic Ocean, he moved to Jamaica and quickly became friends with the pirates. Having robbed some money, he threw himself off with his new friends on a small ship and was elected its captain.

His first expedition brought the glory of a successful rogue to Morgan, and the old pirate Mansfeld took him on a campaign as a vice-admiral. When Mansfeld was killed, Morgan assembled a flotilla of 12 ships and went to Cuba. The pirates seized the city of El Puerto del Principe and ransacked it, after which they began to demand a ransom from the Spaniards who inhabited it. To save their city from arson, local residents had to give 500 invaders heads of cattle.

During one of the sorties for profit, Morgan met with the captains of the pirate ships on the high seas to discuss his further plans, after which everyone drank to the king’s health and opened fire. One of the bullets accidentally hit the powder cellar of the ship, and almost 30 people died in the blast. The British pirates decided to blame the French, who allegedly entered into an agreement with the Spaniards, and after eight days they killed the bodies of the dead in order to take off their clothes and cut off their fingers with golden rings.

In January, 1671, Morgan, with a detachment of 1,2, thousands of people went camping in Panama. In the city they were greeted with gunfire, but the pirates still captured him, killed all those who resisted, looted and burned. After three weeks, emptying all the surroundings both on land and on the water, the filibusters left the city, loading almost 60 mules with gold, silver and jewels.

Morgan did not know that back in July 1670, England and Spain signed a treaty designed to stop the attacks of filibusters on Spanish ships. When in Spain they found out about Panama that had burned down, they all came to a terrible upset. The blame was laid on the governor of Jamaica, Thomas Modiford, who was sent to England and put in the Tower. Morgan was brought home in the 1672 year, however, since he acted in the interests of the authorities, he was not recognized as guilty. At the end of 1674, both were sent back to Jamaica, Modiforda as chief judge, and a knighted Morgan as vice-governor. The former filibuster held this position for 14 years, until he passed away from tuberculosis and cirrhosis of the liver.

Not only men became pirates. As early as the 12th century, the Danish historian Saxo Grammar, in his work “Acts of the Danes,” mentioned a certain Scandinavian princess Alvida, who did not want to marry the unloved and became a prey.

There are legends and legends about many female pirates, among them the “thunderstorm of South China” Zheng Shi (Chen Yi Xiao). Practically nothing is known about her early life, including her real name and exact date of birth. Before the pirates appeared in her life, she worked as a prostitute in the Chinese city of Canton (now - Guangzhou). 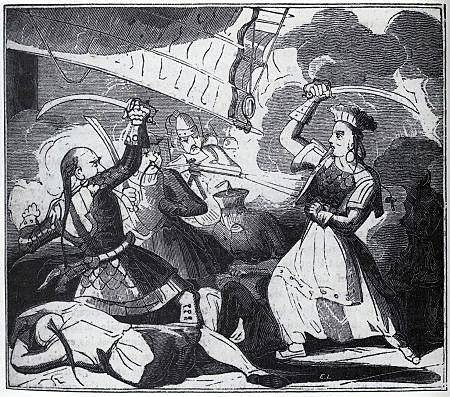 In 1801, when Zheng Shi was 16 years, she married the famous Chinese pirate Zheng Yi, who either took her aboard the ship, or promised joint command of the predatory fleet, to get the girl to consent to marriage. Zheng And then engaged in the creation of a coalition of all the pirates of Canton. By 1804, its combined Red Flag fleet was one of the most powerful in China.

In November 1807, spouse Zheng Shi died. According to one version, he died in Vietnam; according to another, he drowned during a storm. The widow needed to somehow show the crew of the 400 ships she had inherited, who is now in charge, and she decided to enlist the support of the most influential members of the family of her late husband: his adopted son, Zhang Bao, and his cousin Zheng Qi. Zhang Bao was the son of a fisherman whom Zheng Yi was kidnapped from a Vietnamese village when the boy was 15 years old. The young man quickly became involved in the piracy affair and rapidly gained more and more authority among his stepfather's subordinates. Zheng Shi needed an assistant in command of the Red Flag fleet, which at the same time would remain faithful to her and enjoyed the respect of ordinary pirates, and Zhang Bao turned out to be an ideal candidate. So as not to risk it, the widow sealed the partnership, becoming the mistress of her stepson.

Making sure that from now on her power was unquestionable, Zheng Shi took up discipline among her subordinates. The pirate, who dared to go ashore without permission, was cut off his ear. For repeated absenteeism threatened the death penalty. Under pain of death, it was forbidden to rob friendly villages to pirates, without asking to touch the contents of the vault and rape the captured women. The pirate, who had an intimate relationship with the captive by her own consent, was beheaded, and his passion was thrown overboard with cannonballs tied to his legs.

For several years, Zheng Shi increased the number of his minions to 70 – 80 thousand and expanded the fleet to almost two thousand ships, while the Chinese imperial fleet lost 1808 to the 63 pirates in battle with the pirates. The Chinese government was desperate to cope with the queen of pirates and in the year 1810 offered an amnesty to her entire pirate army in exchange for peace. Zheng Shi used the opportunity in the best way possible: only 400 out of tens of thousands of her comrades-in-arms were punished, the rest were allowed to keep everything stolen, many of them were offered military posts, and Zhang Bao took a decent public office. Zheng Shi officially married him and gave birth to a son, and after the death of her second husband, she left for her hometown, where she opened a brothel and casino. "The Thunderstorm of Southern China" lived the rest of her life in wealth and tranquility, became a grandmother and died in 60 years.

Ctrl Enter
Noticed oshЫbku Highlight text and press. Ctrl + Enter
We are
What you didn't want to know about EnglandThe collapse of Somali pirates
Military Reviewin Yandex News
Military Reviewin Google News
7 comments
Information
Dear reader, to leave comments on the publication, you must sign in.