"Crimean scenario in the South-East of Ukraine is unlikely" 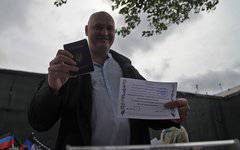 But dialogue with Kiev is possible only after the power is changed there.


In the Donetsk and Lugansk regions held referendums. The absolute majority supported acts of state independence of these regions.

The new political reality is commented on by the Russian political scientist Pavel Svyatenkov.

The current Ukrainian "rulers" are not at all inclined to any compromises.

First of all, it must be said that the results of the referendum provide an opportunity for multivariate developments.

The first option - the proclamation of independence. In this sense, Donetsk and Lugansk will exist as unrecognized states, such as Transnistria. But there is nothing terrible about it: Transnistria has been living like this for twenty years now, and no horror has happened. However, it is clear that this is a freezing of the situation, which, most likely, will not allow Ukraine to join either the EU or, especially, NATO. Practice shows that the North Atlantic Alliance does not like states with territorial problems. Let me remind you that Georgia was demanded to resolve all its issues before joining NATO. We see that so far, despite all the promises, it has not been accepted into the alliance.

The second option is federalization. There is space for bargaining with the Ukrainian "authorities" here, because in theory, self-determination may assume the status of a subject of the federation. It is clear that the concept of "self-determination" does not necessarily mean the creation of its own state. At the same time, bargaining over issues of federalization, if possible, only after power changes in Kiev. It is obvious that the current Ukrainian "rulers" are not at all inclined to any compromises. On the contrary, they are closer to suppressing the uprising with an armed hand.

Russia, it is desirable that Ukraine was a neutral state

The West will resist and resent, but ultimately everything depends on the Russian leadership, and so far there have been statements about the need for negotiations on federalization. It is desirable for Russia that Ukraine be a neutral state, not entering into any hostile blocs in Moscow. There is a struggle for this now, and if the West wants it, then it will be so. If not, then Ukraine is waiting for something similar to what is happening in Georgia: poverty and unresolved territorial problems. And Russia acts quite competently and correctly.

We need the hostile Kiev “power” to leave, because it is capable of unleashing a full-scale military conflict for decades. Yes, she now has no troops, but they can appear, as happened in Georgia in due time.

As for the domestic political situation in Russia itself, the referendums in Ukraine have changed a lot in our country. The patriotic upsurge began, the popularity of Vladimir Putin sharply increased. And the liberal opposition has discredited itself with the unwavering support of the Kiev regime, which is committing outright crimes against the Russians by attacking its own citizens with helicopters, tanks and mortar.

Should we expect that Putin, in the wake of popularity, will take a number of steps of an internal political nature? It is difficult to say: after all, there were already many predictions about this, but they all did not come true. They talked about the resignation of the government, but it never happened; there were thoughts about the new Constitution, however, nothing has changed here either. Such things depend on Putin personally. And it is clear that the resignation of the government is the simplest step, but, I repeat, it has not been done yet.