Mother-General, without whom, perhaps, there would be no Victory 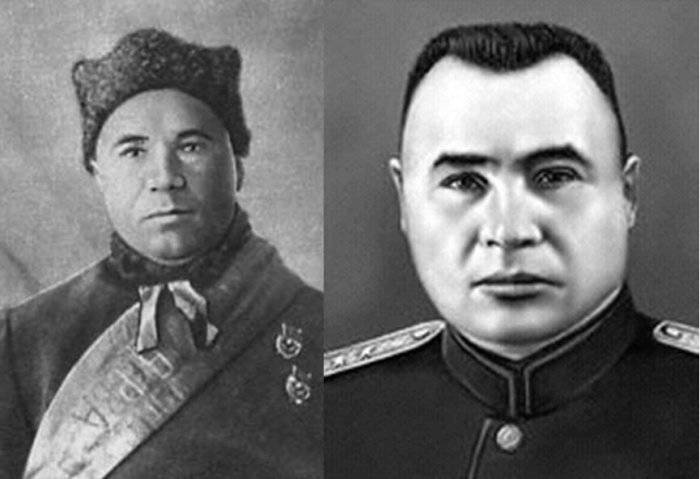 As you know, in May 1938, Stalin transformed the Far Eastern Military District and the Special Far Eastern Army into the Far Eastern Front. And in July-August 1938 of the year on Lake Hassan, this union received a baptism of fire. But Stalin was in anger: the Japanese were not completely defeated, and our losses were very high. This was the reason for the mass and protracted repression among the commanders of the Far East.

The first front commander, Vasily Blucher, was arrested and died in the Lefortovo prison, then, in January, 41, he was shot and his replacement, General Stern. The new front commander was appointed Iosif Apanasenko. He was known about him in the army as foul-mouthed, tyrant and ignorant. And in appearance he was cut down like an ax.

However, the officers soon noted this man’s colossal natural mind. Apanasenko read a lot and was able to evaluate the proposals of his subordinates. He was very brave. And never jeopardized subordinates.

Among other things, Apanasenko found that there is no reliable highway along the Trans-Siberian Railway. It was enough for the Japanese to blow up several bridges or tunnels in order to deprive the army of both freedom of maneuver and supplies. General Apanasenko immediately ordered the construction of a dumping road with a length of almost ... a thousand kilometers. The deadline for this enormous work was set as short as possible - five months.

And imagine the road from Khabarovsk to Belogorsk was built by September 1 1941.

By the way, this is part of the very long-suffering federal highway Chita-Khabarovsk, which cannot be completed until now, in 70 years.

By the way, by the beginning of the Great Patriotic War, the number of the Far Eastern Front was 704 thousands of people against seven hundred thousand Japanese. In July-August, several rifle brigades were deployed from the Far East to the Western fronts. But it was only a small part.

The Germans had already celebrated the "capture of Moscow", and the Japanese troops were actively and aggressively preparing for the attack. The Red Army needed fresh divisions here and there. General Apanasenko resolutely declared to Stalin that he was ready to send at the same time nearly three dozen units. These are actually all combat ready units.

And what about the naked Far East? Who here defended the country from the attack of Japan? It turned out that Apanasenko, in the same positions as the divisions leaving for the West, put new units, moreover, under the same numbers.

It was an infinitely bold personal decision of him - amateur formations were strictly prohibited under the threat of execution.

The general developed an activity unprecedented for a military man. He organized new military production, restored the military state farms. Joseph Rodionovich returned almost all capable commanders to the army from places of detention. Fortunately, most of the repressed were here in the Far East.

Protests by the chiefs of the concentration camps, denunciations of Apanasenko from the leadership of GlavDalstroi were literally a torrent to Beria. But Stalin was silent. And the general with his decision expanded the training of recruits, conscripts arrived in parts of the Far Eastern Front from all the republics.

And in the east of Russia, 50-55-year-old men began to be called into service. The commander of the Far Eastern Front became the main carrier of all the party and economic power of a vast region. The defense of the base cities - Khabarovsk, Vladivostok, Blagoveshchensk - was also strengthened. The east of Russia turned into a real fortress.

And Japan preferred to maintain armed neutrality. They were bound by the power of the Far Eastern Front. But Apanasenko all the time asked Stalin to send him to the army.

And only at the end of May 1943, the general was sent to the Voronezh Front. Just three months, Joseph Rodionovich managed to make war. 5 August 43, at the height of the Battle of Kursk, the general was killed by a shell fragment.

He was buried in his homeland, in Stavropol. No monuments in Khabarovsk Joseph Apanasenko not delivered. In the official stories World War II the name of this army general is not mentioned even once.