On the right to pendal fascist. To one sensational roller 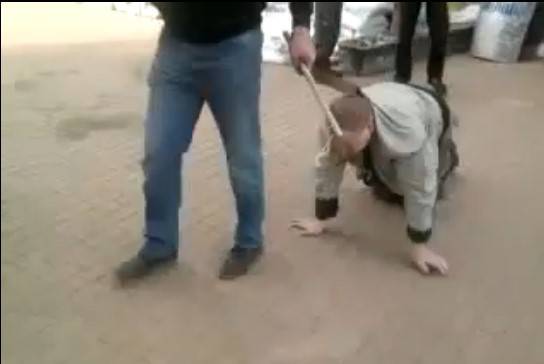 A video appeared on the network with a scene of punishment of Luhansk’s Euro-Maidan, caught in Lugansk for disrupting announcements of a national referendum. Since the video itself and its clones are quickly removed by administrators from all hosting sites, we will not provide a link, but we will limit ourselves to a verbal description (for now here). The video is quite plump "hero" are on the street on a leash on all fours. The surrounding at the same time express approval of what he saw and from time to time award pravoseka with Pendels. That's all. But this is not at all surprising, but the reaction of some compatriots to what they saw. It should be disassembled.

So, a large proportion of commentators expressed strong disapproval of the method of punishment. The main reasons for this are as follows:

- Now the Ukrainian media will use this video to blame supporters of federalization.

As an alternative, it is proposed to transfer the investigators caught in the hands and rely on the decision of a fair Ukrainian court.

For example, they write this:

If you are a State, if you claim to be considered in the future, then from the very beginning build institutions of power. Let the investigation investigate, the prosecutor's office of the Lugansk Republic is indicting, the court is judging. Do not be wild. Let the junta demonstrate savagery, and you must appear before the world as civilized people! ”

There are actually a lot of such comments, almost half, which makes it possible to reflect on the manifestation of the psychological phenomenon that we have once identified. But first I would like to point out to all those who condemn the actions of self-defense, specifically in this case, one moral aspect, which they themselves, while appealing to categories of morality, for some reason ignore. It is very simple - you, friends, have no moral right to condemn. But this can be corrected - get up from the sofa, go to Lugansk, Kramatorsk, Slavyansk, Mariupol, etc. and stand shoulder to shoulder on the barricades with the militia. Stay under the fire at least one night, look into the dead eyes of the shot demonstrators, worship the ashes of the burnt alive. And then come back and tell us again about a fair and humane court, which should decide the fate of the Nazis. Otherwise, keep your moralism with you.

I would also add that, given the intensity of the moment, the pravosek crawling on their knees should thank their captors for the highest degree of humanism shown to them. There are plenty of video clips available to the public, where people are simply torn to pieces, cut off their heads, dumped into wells, simply because they belong to the opposing ideology. Under the cheerful and joyful cries of "Allah Akbar". And, what is remarkable, for some reason, such videos from YouTube are either not cut or are removed extremely lazily. This is because they are informational in themselves. weapons and aimed at suppressing the will to resist the enemy (in this case, the supporters of the overthrown legal authorities of Libya and the supporters of B. Assad in Syria). The movie with the Bandera tied on a leash should be regarded as a signal to his fellow men, who are no different, as we know, with special courage. Certainly, in peacetime, he would have looked wild and repulsive, but, given the current situation, it is quite appropriate.

Now back to the phenomenon.

We know that when confronted with injustice remotely, the average Internet commentator is filled with a belligerent spirit, exposing an imaginary saber and calling to punish the guilty with all possible severity. There is an inverse proportion - the less familiar such a warrior is with violence in reality, the more bloodthirsty his appeals. And vice versa - the more the commentator had a chance to look at violence and its consequences in real life, the less bloodthirsty he is in his statements. However, since the militancy of the bloodthirsty was not born by personal experience, but by ideas drawn from cinema / animation, then at the first encounter with her or her echoes they quickly lose their ardor and turn into humanists. Some even enough the easiest whiff of reality, for example, in the form of a video clip with a Bandera crawling on their knees. Such whiff of other summoners for reprisals causes dizziness, bouts of nausea, palpitations and a sharp change of rhetoric from Stalinist to Tolstoy.

So the video being discussed opened the line of discussion that was unheard of yesterday, the enemies, it turns out, need to be given into the hands of investigations and trials. And to demonstrate "civilization" to the "whole world".

What can I say. Span wanted the whole world to your civilization. While you blame the speedy and very humane people's court, this world is in a hurry to turn the resistance into a ram's horn, burn it in ovens and trample it into the ground. And then get to us. Only who will fight if every second person has a heartbeat and nausea?

Ctrl Enter
Noticed oshЫbku Highlight text and press. Ctrl + Enter
We are
The honest story of euro Maydanovtsa about money, murder and window dressing MaidanMikhail Leontyev: “We are not just on a leash, but on the shortest leash in the world”
Military Reviewin Yandex News
Military Reviewin Google News
99 comments
Information
Dear reader, to leave comments on the publication, you must sign in.