14 May 2014
281
Latvian Ventspils Mayor Aivars Lembergs said that he was going to send NATO Secretary General Rasmussen complaint against the soldiers of the North Atlantic Alliance, who arrived in Latvia for teaching Open Spirit. The reason for this decision of the mayor of Ventspils in the fact that NATO military behave in the words of Lembergs as "pig-occupiers who do not recognize the Latvian laws." Reports about it RIA News". 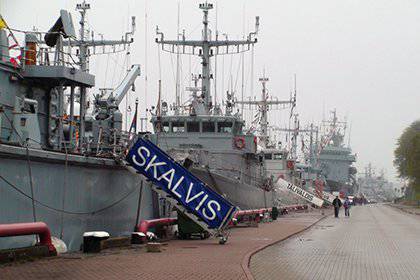 The TV channel "Russia 24» came out with a story about how to behave NATO soldiers arrived in Ventspils to large-scale maneuvers. Wards Rasmussen, do not hesitate to defecate right in public places, drink alcohol in the streets, while trampling flowerbeds. These “feats of brave military men” were witnessed by Lembergs, who wrote on his page on the social network:

Being drunk, they urinated in public places and at the windows, they vomit, they were drinking alcoholic beverages in public places is forbidden. In addition, they plucked flowers to give them prostitutes.
Latvian edition "VentasBalss" cites the words of the police chief of Ventspils Janis Arajs, who tells how foreign military men behave in Latvia:

We had developed a tactic of action, since such ships in Ventspils do not go for the first time. The staff from the ships also goes to the city. We discussed it, but, anyway, we were not ready, so to speak, to that landing and behaviors that have occurred over the weekend.

According Arajsa, 23 NATO sailor were fined for various offenses, the most common of which - urinating in public and demonstration of genitals.

The behavior of foreign seafarers has caused a wave of anger among residents of Ventspils. The police have registered the attack locals on sailors from the Netherlands, who inappropriately behaved in relation to local girls in one of the bars in the city. The mayor of Ventspils said that the Dutch military themselves provoked the conflict with their antics.

Meanwhile, from the Ministry of Defense of Latvia on the fact of the incident came more than a strange answer. The ministry said that each country that is a member of NATO is free to determine how its military spend free time.