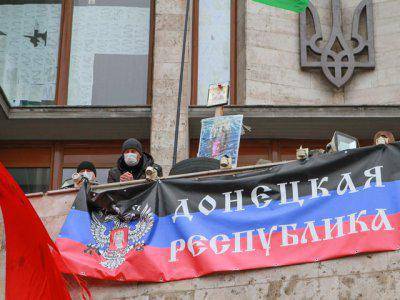 After the May 11 referendum on self-determination in the Donetsk and Lugansk regions, the situation inside Ukraine and around it as a whole has not changed strategically. There is still a delicate balance in the balance of power in the east of Ukraine. The official authorities of Kiev are not able to regain their control over a number of settlements in the Donetsk and Lugansk regions, despite the use of force, including heavy weapons. Pro-Russian activists in Lugansk and Donetsk are trying to organize themselves, but so far they can control only part of the territory of two regions.


At the same time, the conflict between the West and Russia continues to develop on its own with respect to the assessment of events in Ukraine. Western countries are increasing sanctions against individuals and individual companies from Russia and are talking about more serious economic sanctions. This causes a clear discontent of Moscow, which is already beginning to feel their economic consequences. In particular, this concerns the flight of capital from Russia and the actual closure of foreign financial markets for Russian companies, which threatens to exacerbate the current economic downturn.

Russia is clearly not going to give in, but it is not going to aggravate. Although some Russian politicians critical of the West periodically throw in relevant ideas. For example, there are questions about the presentation of US and European debt obligations, which form the basis of Russia's gold and foreign exchange reserves, the switch to selling Russian oil and gas for rubles, the refusal of the dollar to make payments, the transition to a so-called currency-credit swap in trade relations with important partners and others. The last sentence is very interesting. It assumes that countries trade among themselves using national currencies, and then the country that has more imports than exports compensates for the difference. De facto, this is currency clearing. In the period before the Second World War, it was actively used in relations between Germany and the countries of Eastern Europe dependent on it.

But the question now is not the economic confrontation between Russia and the West. For the time being, this is only an implicit possibility that, in principle, may not turn into an economic war. The question is whether there can be any talk of a global confrontation, which implies Russia's transition to economic autarky, as well as opposition to the West along all lines. For example, providing support to Iran on its nuclear program, supplying weapons Type C-300 to this country and Syria. That is, whether the beginning of a new cold war is likely.

Naturally, a kind of litmus test, which will allow you to understand how far Moscow is ready to go will be the question of South-Eastern Ukraine. If you follow the logic of global confrontation, then you can assume that the idea of ​​Novorossia can be theoretically implemented.

It is actively promoted by pro-Russian forces in Donetsk and Lugansk. Naturally, this idea is supported by all-round support among radical-minded politicians in Russia, which can be conventionally called “imperials”. The minimum program of New Russia includes two areas that have already held a referendum. The maximum program already covers up to eight oblasts of Ukraine along the left bank of the Dnieper, including the entire Black Sea coast.

Actually, everyone today is waiting for what Moscow will do. Is it possible to imagine that the point of view of the radical-minded circles of Russian society will prevail, or will pragmatism prevail? The Russian leadership is in a difficult situation. Every step that provides tactical successes - the Crimea, now a referendum in Donetsk and Lugansk, causes all new sanctions from the West. While they are not very sensitive, but inherently unpleasant. In addition, they put official Moscow in a position where radical politicians are activated inside the country, their anti-Western rhetoric is becoming tougher. In this situation, it would be easier to find some solution, to agree, because delaying the situation can be perceived as weakness, as a loss of face.

It can be assumed that Russia would like to agree with the West. It is with him, and not with the new leadership of Ukraine. Its terms are already indicated. Moscow wants the federalization of Ukraine, the legitimization of the transition under its control of the Crimea and the lifting of all sanctions. The West will naturally not agree with all the conditions. The annexation of the Crimea is likely to never be recognized, the sanctions are negotiable, but they are unlikely to be completely canceled. The only time around which you can build an interim compromise today is the federalization of Ukraine.

The parties have already made the necessary statements for this. Russian President Vladimir Putin said that the 25 presidential election in Ukraine in May is a step in the right direction. In parallel, Ukrainian politicians pointed to the possibility of decentralization. Somewhere in the middle between federalization and decentralization, in fact, you can find a compromise that allows, on the one hand, to save the face of the Russian authorities. On the other hand, it will stop the process of disintegration of Ukraine. At the same time, Crimea will simply be taken out of the agreement.

One can argue for a long time that the root cause of all the events in the Crimea and in the east of Ukraine is an internal protest or the help of “green men”. Now, actually, this is not so important. It is important to stop.

Official Moscow clearly does not want to implement the project of a large Novorossia. Too high costs - both financial and purely military. For example, the invasion of troops in the area of ​​left-bank Ukraine, which is theoretically possible according to the mandate of the Federation Council of March 1, will not meet such support everywhere in Crimea and Donbas. In addition, only the Crimea is already very expensive for Russia, and how much the whole East of Ukraine will cost is difficult to imagine. It is clear that pro-Russian activists in Ukraine are guided by Russian salaries and pensions and rely on the Crimean precedent.

The West also does not want too radical development of the situation. This will create big problems, first of all, for Europe. Most likely, the West would like to stop the expansion of Moscow and then focus on the development of Ukraine as an alternative to the Russian version of development.

Therefore, despite the harsh rhetoric, the achievement of agreements today is quite likely. The new president of Ukraine, most likely it will be Petro Poroshenko, can make the most unpopular decisions. However, he will not be associated with all the actions of the Ukrainian authorities in the past three months.

For Kazakhstan, this is the best possible scenario. The confrontation between the West and Russia too much narrows our space for maneuver. In addition, it is impossible not to take into account that the growth of radical sentiment in Russian society, a certain euphoria from the annexation of the Crimea, cannot but affect our public opinion. Stormy discussions also take place here, they are just not very noticeable and, probably, this is just what is good.

Ctrl Enter
Noticed oshЫbku Highlight text and press. Ctrl + Enter
We are
The world we leave, the world we enter, and the world between themMilitary reform as an integral part of the security concept of the Russian Federation: Systematic dynamic assessment
Military Reviewin Yandex News
Military Reviewin Google News
39 comments
Information
Dear reader, to leave comments on the publication, you must sign in.