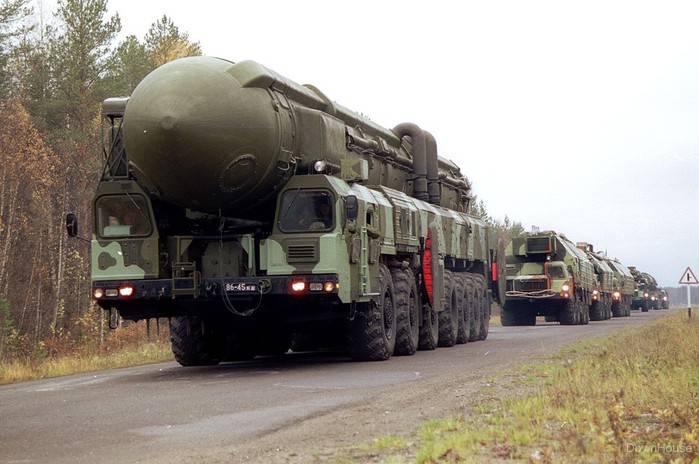 The virtual-mythical “reset” of relations between the Russian Federation and the United States can in the very near future finally order to live long with, perhaps, its only achievement that goes beyond the framework of diplomatic curtsy and verbal indifference. Interfax reports that Russian Deputy Foreign Minister Sergei Ryabkov, speaking in the State Duma, said that the development of the US and NATO missile defense systems without taking into account the views of the Russian Federation could be the basis for Russia’s withdrawal from the START Treaty.

“The new START itself may become hostage to the so-called. American phased adaptive approach, "- said the representative of the Russian Foreign Ministry. According to him, the possibility of withdrawal in connection with such conditions is fixed in the contract itself. In addition, Sergey Ryabkov noted that Moscow will be forced to take retaliatory measures if the United States and NATO develop their missile defense system without taking into account the opinion of the Russian side. “It is clear that such a scenario would be extremely undesirable for us,” the diplomat demonstrated the constructive attitude of the Russian side and added that “there is still time to agree.”

The reason that prompted domestic diplomacy to such an uncharacteristic brutal (albeit in a rather restrained performance) tone of communication with "American colleagues" was the latest events at the European "theater of anti-Russian anti-missile actions." As it became known at the beginning of May, the American White House, contrary to the initial assurances of its freshly baked peacemaker resident in the rejection of plans to deploy elements of the American missile defense system (radar and anti-missile systems) in Eastern Europe, is in no way going to give up its hostile intentions. Instead of Russophobic Poland, which was forced to settle for the less modern Patriot air defense system, it is planned to transfer the released anti-missile facilities a little further south - to the territory of Romania, whose leadership, by the way, judged by a number of statements made by President Traian Basescu, is also not opposed militant Russophobia.

The special cynicism (to which, in the case of the United States, in truth, should have been used to it for a long time), this action is attached to the fact that this message took place just the next day after the start of the Russian-American negotiations on the European missile defense system in Brussels. Recall that at last year’s summit in Lisbon of the Russia-NATO Council (the first after the war in South Ossetia in 2008), both parties agreed on cooperation in creating a pan-European missile defense system. And in early May of this year, a meeting of the NRC at the level of chiefs of staff was held in Brussels, in which the head of the General Staff of the Russian Federation Nikolay Makarov participated. During the meeting, he said that Moscow was ready to discuss any constructive proposals for participation in the European missile defense system, but NATO should give guarantees that the system being created would not threaten the nuclear potential of the Russian Federation. In this context, the Pentagon’s subsequent anti-missile demarche looks like a frank spit in the outstretched hand, which, in turn, leaves no doubt about Washington’s position on this issue. It is no secret that it is the Americans who have the “controlling stake” and, if they wish, can block almost any solution in the field of European security.

The possibility of Russia's withdrawal from the recently ratified Treaty with the United States on the Limitation of Strategic Offensive Arms in an interview with KM.RU was commented by the chief editor of the magazine National Defense Igor Korotchenko:

- I would like to note right away that for the time being, this is not about a final decision, but about the position of the Russian Foreign Ministry. The final decision will be made by the president of the country on the basis of a collective discussion held with the participation of all the relevant agencies that are in one way or another responsible for the situation in the field of national security.

Personally, I am of the opinion that withdrawing from the START-3 Treaty, even if we do not agree with the Americans on cooperation in the framework of the European Missile Defense, we should not (and I am sure that we need to proceed from the fact that we do not agree with them) because the START Treaty is equally beneficial to both parties. For all that, a number of his formulations may not suit us at 100%. Nevertheless, it is inappropriate to leave it.

Now, what should be the correct reaction in the event of an unfavorable development of events (the appearance in Europe of the position area of ​​the American missile defense system. - Approx. KM.RU). Russia must develop its potential in the field of military-technical measures so that if a military solution is needed, we could “nullify” the potential of a European missile defense system (if we are not there). First of all, we are talking about measures related to the preservation of tactical nuclear weapons as the main means of countering threats in the western theater of operations. This, respectively, means that each of the commanders of the joint strategic command (we have four) had the opportunity in wartime to apply an independent decision on the use of tactical nuclear weapons in their area of ​​responsibility. Thus, we would definitely compensate for the threats that would be borne by the European missile defense system. That is, we do not need to get involved in negotiations with the United States to limit the tactical nuclear potential. To begin with, let the Americans withdraw their tactical nuclear weapons from the territory of the NATO countries. This will be a condition for us to enter into some kind of negotiation process. Until the Americans withdraw their tactical nuclear weapons from Europe, there should be no negotiations on them.

The second. We need to have the potential associated with the destruction of the information and intelligence circuit of European missile defense. This means that we must have the military potential to destroy radar guidance and detection, as well as computing components (“brains” of the future Euro missile defense system). It is associated with operational tactical missiles of the Iskander class and special ammunition that could be deployed on the territory of the Kaliningrad region, as well as on the territory of Belarus under the relevant agreement with this country. Plus, it is necessary to tap the potential of the Russian Tu-22 M3 medium bombers, which have the capability to launch missile strikes on the information and intelligence circuit of the European missile defense system. Then, if, through the 10-15 years, the European missile defense system would really threaten us, we could quickly and clearly take measures aimed at neutralizing these threats.

And, of course, we need to actively go on updating the grouping of the Strategic Missile Forces, because already in the next 7 years we will have to write off almost all the heavy Soviet-made liquid ballistic missiles that are in service. Instead, massive production (within the quota under the new START Treaty with the United States) of solid-propellant RS-24 Yars ballistic missiles in the mobile version is necessary. Having such a retaliatory strike potential, we thereby force the Pentagon to really deal with this threat, because at least 50 nuclear weapons delivered to the US in retaliation (if America attacks us first) will already be fatal. Thus, we are restoring nuclear deterrence and the strategic equation of nuclear safety, while the above-mentioned asymmetric measures are fairly low-cost. We will not have to be drawn into a frontal arms race, inventing some kind of space interceptors or weapons based on unconventional physical principles.

Within the framework of the quota that we have under the START Treaty, we will have quite enough funds to ensure the destruction of the United States in the event of a hypothetical conflict. We cannot divert our forces today and be drawn, like the Soviet Union, into building thousands of ballistic missiles. Our economy will not survive. Yes, this is not necessary: ​​it is enough to have literally 200 ballistic missiles RS-24 "Yars" in the mobile version. They are hidden by special measures of masking from external observation and move around a special area that is not limited to any coordinates. In addition, they are virtually invulnerable in the case of the first massive strike on us, even in the case of using high-precision weapons (I'm not even talking about a nuclear strike). At the same time, they create sufficient retaliatory potential.