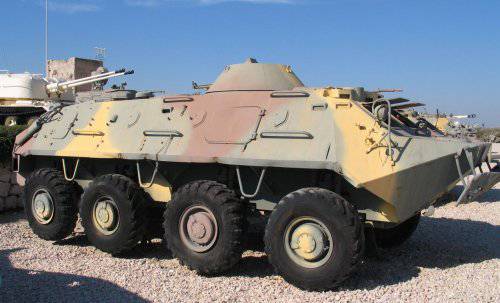 The BTR-60P armored personnel carrier was developed at the Gorky Design Bureau under the direction of V.А. Dedkov on the original base with the front control compartment and aft placement of the power plant. In the middle part of the hull there was a troop compartment that housed a 16 man, in which the arrows were facing the car’s board. The layout scheme provided the necessary constant trim of the machine on the stern to improve its navigational qualities.

Between the floor of the troop compartment and the bottom of the machine were installed transmission units. The open-top hull was carrying, had a streamlined bottom and bottom, and was made of armor plates with a thickness of 6-8 mm. The mass of the armored personnel carrier was 9,8 tons. On the brackets of the front and side hulls of the hull mounted machine gun SGMB, ammunition which was 1250 cartridges.

To ensure the specified mobility requirements, the BTR-60P used two carburetor engines GAZ-40P with the power of 90 hp, representing a forced version of the engine of the GAZ-51 truck. The engines were mounted in parallel, each with its transmission units on one common frame, but not the engines themselves, but only their control drives were interlocked. Four-speed gearboxes with synchronizers. 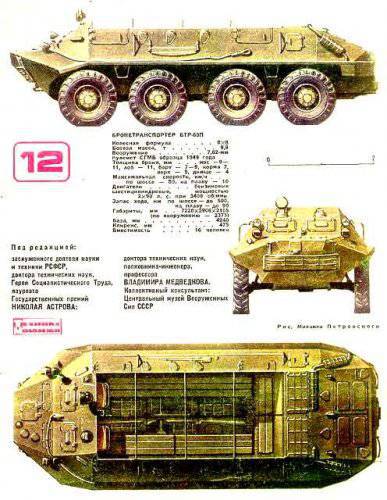 Large-profile tires had a central air pressure control system. A wide track made it possible to move beyond tanks, and four evenly spaced axes made it possible to overcome ditches up to 2 m wide. A jet-propelled jet propulsion device was used to move on water. A winch with a cable length of 50 m and a maximum traction force of 4500 kgf was installed in the front of the hull. 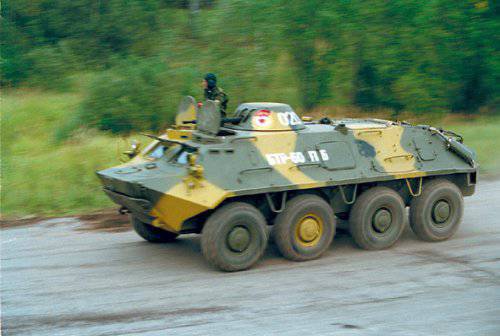 BTR-60PA. From 1963 to 1966, the BTR-60PA was produced with a closed, fully sealed enclosure and a filtering unit. The machine gun was mounted on one of the three brackets on the roof of the hull. The landing and landing of troops (12 man) was carried out through hatches located in the roof.

BTR-60PU. On the basis of the BTR-60P, the P-145 control machine “Chaika” (BTR-60PU) was created, it was in service and in mass production and differed from the base machine by the installation of communications equipment - two VHF radio stations P-111, KV of radio station P-123, corresponding antenna and switching equipment. The crew of the car consisted of four people. The machine arrived at the headquarters of tank, motorized rifle, artillery regiments and formations.

BTR-60PB. It was a modernized version of the BTR-60PA. It was created by the design office under the direction of V.A. Dedkov and adopted by order of the Minister of Defense of the USSR from 29.06.1964. Serial production of the machine was carried out in 1965-76. The main difference of the armored personnel carrier was a rotating conical turret with a paired installation of a 14,5-mm KPVT machine gun and a X-NUMX-mm PKT machine gun. Machine gun installation periscopic sight and manual guidance. The horizontal angle of attack is 7,62 °, the vertical angle of attack is from -180 ° to + 5 °. Provided for the installation of the NVD at the commander and the driver. On the basis of the BTR-30PB, the commander’s armored personnel carrier BTR-60PBK was manufactured and adopted by order of the USSR Minister of Defense from 60. With the adoption of the unified BNU-5.05.1975 turret machine gun in 1, he was assigned the BTR-1976PV brand. In 60, on the basis of the BTR-1972PB, the BTR-60PZ was developed, which differed in the angle of elevation of the machine-gun installation to 60 °. The car was produced in limited quantities and was not accepted for service.

MTP-2. The technical assistance machine MTP-2 was created as a mobile means of technical support for the motorized rifle battalion. It was designed to evacuate, troubleshoot and carry out labor-intensive maintenance work for the 40, BTR-152, BTR-60PA, BTR-60PB, BRDM and BRDM-2 BTR. The machine was created on the basis of the BTR-60P armored personnel carrier chassis and adopted by order of the USSR Minister of Defense from 25.07.1975. Serial production of cars began in 1976. MTP-2 differed from the base machine by installing a crane-boom, gas-welding equipment and the presence of a set of pullers, accessories and tool. The machine had a collective protection system.

PU-12. The mobile control center PU-12 was developed on the basis of the BTR-60PB armored personnel carrier chassis and was used in 1972. The control point was intended for artillery units, providing command and control communications with all-arms units. The machine was equipped with a unified data acquisition and transmission equipment, communication equipment, navigation equipment, anti-nuclear protection system and an autonomous power supply unit.