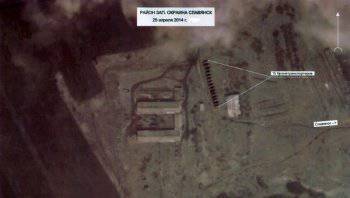 According to RIA "News"With reference to the Reuters news agency, on Tuesday, the US State Department presented images from space that allegedly confirm the presence of Russian troops on the Russian-Ukrainian border.


Earlier, Russian President Vladimir Putin reported that the Russian armed forces had moved away from the border with Ukraine, but the leadership of NATO and the Pentagon have repeatedly noted that they do not observe any signs of withdrawal.

According to Reuters, one of the satellite images was taken on May 9 in the vicinity of Belgorod. It can be seen around 20 Russian military helicopters, while in the pictures from 22 March, they were not. Another shot is dated 12 May. There is a detachment of armored vehicles of the Armed Forces of the Russian Federation, which is located on the territory of the Rostov region in 75 kilometers from the Ukrainian border. They can also be seen on the 23 March image.

It is worth noting that similar satellite images of NATO were published in April. However, then a high-ranking representative of the General Staff of the Russian Federation stated that they had been made not in the spring of 2014 of the year, but in August of 2013 of the year when Russian troops conducted exercises in the area.

Ctrl Enter
Noticed oshЫbku Highlight text and press. Ctrl + Enter
We are
China has completed the localization of the production of armored vehicles "Tiger"
Military Reviewin Yandex News
Military Reviewin Google News
85 comments
Information
Dear reader, to leave comments on the publication, you must sign in.