14 May 2014
20
As the Rossiyskaya Gazeta, the new ministry was created by order of the head of Russia - Vladimir Putin. The president told reporters that the newly formed department would deal with the affairs of the North Caucasus. Putin proposed to head the Krasnoyarsk Territory Lev Kuznetsov to head the new structure, with whom he had already successfully spoken at a meeting in Sochi. 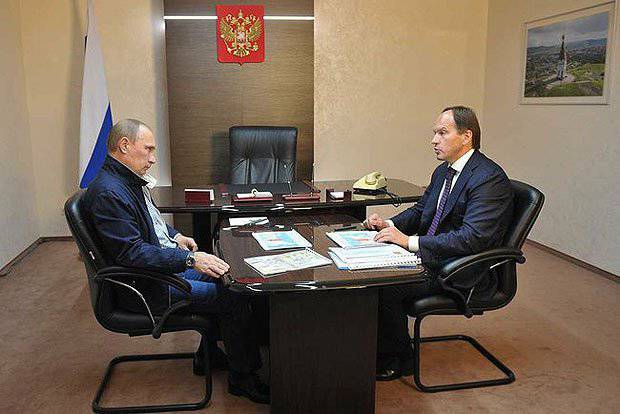 The head of state also managed on the same day to appoint two new plenipotentiaries - in the Siberian and North Caucasus federal districts and conducted a number of important personnel changes among the leadership of the Ministry of Internal Affairs. It is worth noting that these were the first major changes in the cabinet, which was formed back in 2012 by Dmitry Medvedev.

Presidential spokesman Dmitry Peskov said that, in this way, Vladimir Putin aligned the management structure for three important regions for Russia: the North Caucasus, the Crimea and the Far East. Now the minister, the plenipotentiary and the supervising prime minister will be leading the subjects everywhere. So far, there are only three such ministries in the country.

As Dmitry Medvedev noted in an interview with his deputies, he had previously discussed with the president questions about the interaction of the territorial and sectoral component with the government. Now, after the creation of a new ministry, the work of the three priority regions will be built in the same way.

The decision to appoint Kuznetsov as minister responsible for the development of the North Caucasus was made by Putin after analyzing the results of the work of the governor of the Krasnoyarsk Territory over the past few years. The President noted that the acquired experience and skills will greatly help Kuznetsov in the new place of work. The head of state also noted that the creation of the ministry would allow the federal authorities to focus more on the development of the North Caucasus region.

According to the head of the Kremlin administration, Sergey Ivanov, the priority task of the ministry created is the economic development of the North Caucasus, work on attracting investment, solving employment problems and rational spending of budget funds.

On the vacant chair of the head of the Krasnoyarsk Territory, Putin decided to appoint the presidential envoy to the Siberian Federal District Viktor Tolokonsky. In turn, Nikolai Rogozhkin, Commander-in-Chief of the Interior Forces of the Ministry of Internal Affairs of Russia, will take his place.

As for the Deputy Prime Minister Alexander Khloponin, who was the Plenipotentiary in the North Caucasus Federal District since 2010, and did a lot of things for the development of the region, according to Dmitry Medvedev, now his duties will be mainly focused on working in the government as Vice -premiere. And instead of Alexander Khloponin, by order of the president, Sergey Melikov was appointed plenipotentiary commander of the internal troops of the Interior Ministry in the North Caucasus.

During the meeting with Rogozhkin and Melikov, Vladimir Putin personally wished them successful work in new positions. The President noted that the internal troops of Russia not only successfully fulfill their direct duty, they also represent a good personnel reserve at the political level.
Ctrl Enter
Noticed oshЫbku Highlight text and press. Ctrl + Enter
We are
The big press conference of Vladimir Putin
Military Reviewin Yandex News
Military Reviewin Google News
20 comments
Information
Dear reader, to leave comments on the publication, you must sign in.