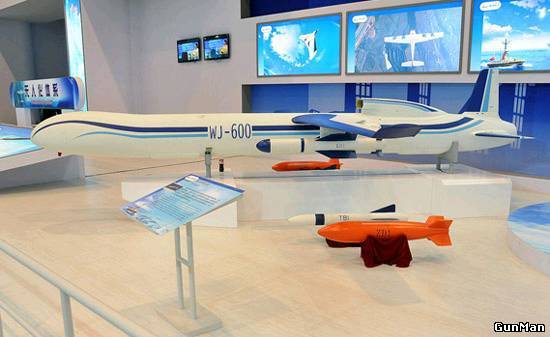 At present, China is actively developing all the main directions in the field of combat aviation. Just the other day there was a message about the creation of the next modernization of the Soviet Tu-16 bomber - H-6K, the Chinese, together with the plane, tested "new-style missiles."

It can be said that this is, say, a lag behind our strategic aviation for several decades, but this is not the main thing, the main thing is that Chinese designers do not stand still, they work, improve existing models, create new models - based on Western and Russian technologies.

The Chinese Air Force is second only to the United States and Russian Air Forces, China has more than 3000 units of combat and auxiliary aircraft. China is modernizing its Air Force at an astonishing rate, only relatively recently, in 70-80-ies, they were quite backward, focused on the defense of their territory and were inferior to the USSR-Russia air force in all respects. But since the beginning of the 90-ies, they have undergone a rapid transformation, turning into a modern aircraft of the Western type, capable of performing the widest range of tasks.

Now they are able not only to solve the tasks of the Air Defense of their territory, to cover the ground forces in China, but to strike at targets that are at a considerable distance outside their territory, including the sea. The capabilities of the Chinese Air Force for reconnaissance, early target detection, air defense and missile defense are much improved.

- protection of its border in possible territorial disputes with its neighbors: Japan, Vietnam, India and so on.

- winning air supremacy over Taiwan if a political decision is made to restore China’s "territorial integrity" by military means. They are already able to accomplish this task, surpassing the Taiwan Air Force quantitatively and qualitatively.

- achievement of superiority of air, in the region, over the USAF.

- achieving superiority in the air in the event of war with Russia, just one significant example: for this, following the example of the United States, a flight training center called Aggressor was formed in China, pilots on the Russian Su-27 act as opponents of Chinese aircraft.

The main directions of development of the Air Force

- In the field of bomber aviation, the PRC has approximately 80-120 (according to different sources) H-6 of various modifications, the PRC is forced to upgrade them in the absence of an alternative (for now). In 2006, a modification of the “Hun-6M” was adopted, increasing the flight range and strike power. And here is another upgrade - “Hun-6K”. These bombers can attack the lands of the Far East, Siberia, Central Asia, the Korean Peninsula, the Japanese and Philippine Islands. The arsenal developed on the basis of the Russian X-55 rocket and with the help of the American developments of the ALCM DH-10 (Donghai-10), is considered to be on the 1500 km, with an accuracy of 10-15 meters.

- Work is underway on the H-7, two-seat tactical bomber, and JH-7 - the development of the project H-7, fighter-bomber.

- The successful development of UAVs, back in 2010, at the aerospace exhibition in Zhuhai, the PRC showed dozens of promising UAVs. For example: the WJ-600 drone UAV based on a cruise missile, and the Chinese 10 on May 2011 showed the flight of an unmanned helicopter V750.

- The PRC on the basis of the Russian Su-33 aircraft actually created its own carrier-based fighter, the J-15. This year, or as a last resort in the next, the Chinese will put into operation their aircraft carrier, the former Soviet "Varyag".

- China plans to create its Military Space Forces, at the beginning of 2011, the Chinese successfully tested the first orbital unmanned vehicle, it is able to stay in space for 270 days a year and solve various defense tasks, including the destruction of enemy communications satellites. This year, Beijing will launch the first components of its orbital station; its full assembly is planned before 2020 of the year.

- It creates its own fighter 5-th generation J-20, based on American developments, and, apparently, Russian.

- The airfield network is expanding and strengthening, it already has more than 400 airfields, most of them are protected, have arched shelters for airplanes, underground ammunition and fuel stores are built, there are rock shelters for airplanes in mountainous areas. Airfield equipment was replaced; now it is possible to provide flights in adverse weather conditions and at night. The operational capacity of the airfield network increased to 9 thous. Aircraft.

Weak sides: for the time being, the PRC air forces are much inferior to US military aircraft in the field of modern DRLO aircraft and electronic warfare (EW). They are few, but China does not stand still, trying to close the gap. There is not enough tanker aircraft for conducting large-scale operations outside the country. According to Western analysts, the PRC's radio-technical forces are still weak in detecting low-flying targets, protecting radar posts from the air, and low radar noise immunity.

Danger to Russia: The PRC's air force is rapidly crowding out our air force from the second place in the world in terms of the number of 4 generation aircraft, provided China has 3 generation aircraft that can be sacrificed to suppress our air forces and air defense forces, forcing them to use ammunition. The PRC Air Force is already superior to ours in the development of promising systems: UAVs, orbital planes. They are going to introduce the first aircraft carrier and there are two more behind it, and we have only one, and the prospects for the creation of new ones are not traceable. If the trend is not broken, then our army will give way in the air not only quantitatively but also qualitatively to the potential enemy.