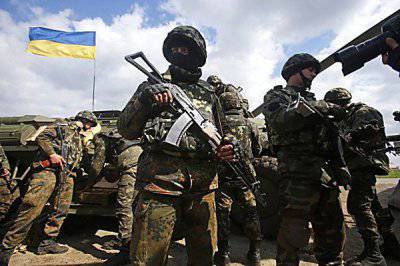 ITAR-TASC. Soldiers of the so-called National Guard surrounded the village of Oktyabrskoye, located in 15 km from the city of Kramatorsk (Donetsk region). As reported by the correspondent. ITAR-TASS, a representative of the Kramatorsk militia, armored vehicles were being forced into this area, at least three Ukrainian helicopters landed.


The armed clash began when a column of armored vehicles of the Ukrainian security forces was passing along the road near the village of October. “The national militia forces blocked her path, two pieces of equipment were destroyed — one armored personnel carrier and a vehicle with ammunition. The second car caught fire and for half an hour cartridges and shells that the national guard was transporting in it,” the militia representative said.

"During the battle, civilians of the Oktyabrsky went down to the basements of their homes, trying to escape," he added. According to him, the settlement was left without electricity, "because the collision was damaged power lines." Shots were heard, including from large-caliber weapons.