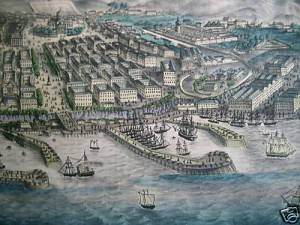 160 years ago, Russia waged a heavy war with a coalition from Britain, France, the Sardinian kingdom (Italy) and Turkey, which was trying to seize the southern part of Ukraine, including the Northern Black Sea region and the Crimea.


Among the episodes of the Crimean War, in contrast to the notorious defense of Sevastopol, the defense of Odessa in the spring of 1854 is much less memorable.

This important port and large economic center 20 April tried to seize a strong Anglo-French squadron. But, unexpectedly, the enemy armada was repulsed, although only one of four cannons operated against the nine frigates of the enemy. One of the enemy ships was damaged and caught fire. Then the Allies, having departed into the sea, with massive artillery fire from a safe distance destroyed half of the city, destroying the ships of neutral countries that were in the port and turning civilians' houses into the ruins. Among many inhabitants of Odessa, the Frenchman was struck by a projectile - the core landed on the pedestal of the monument to the founder of Odessa, the Duke de Richelieu. 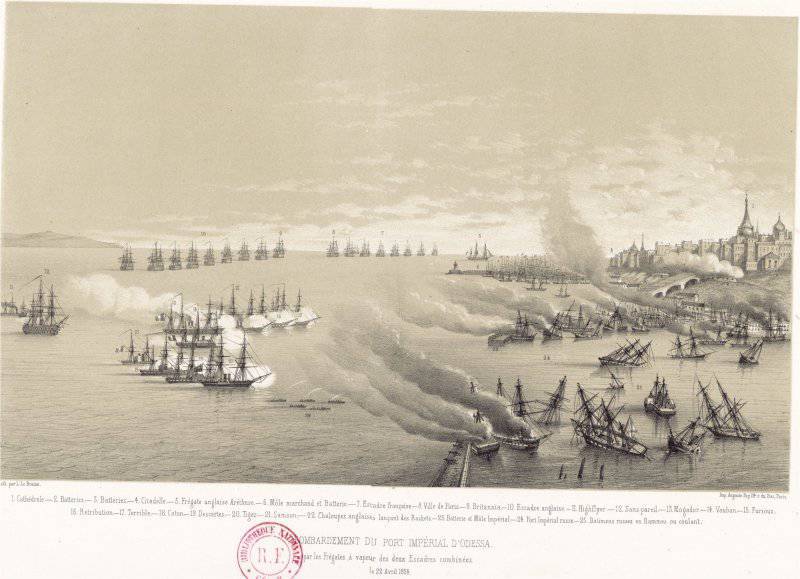 On April 30, the enemy’s fleet, having decided to repeat the strike, sent three steam-powered English frigates for reconnaissance to Odessa. One of them, "Tiger" ("Tiger"), came too close to the shore and ran aground in a fog. The arrived field battery and cavalry patrols managed to accomplish the unheard of - almost hand-to-hand capture the newest British warship. My fellow countryman, commander of a squadron of the Belgorod Lancers Regiment, Mikhail Oshanin, a descendant of the old Suzdal family, was among the participants in this unusual operation.

The Oshanins are one of the oldest families of the Suzdal-Rostov Region, leading the account of their ancestors from the XIV century. According to legend, the founder of the family was a certain “honest man” Stenia, who left Venice from Russia under Dmitry Donskoy. Traditionally, the Oshanins labored in the military arena. The grandfather of the future hero of the capture of the English frigate Alexander Ivanovich Oshanin served in the Suzdal Infantry Regiment, in which he participated in many battles of the Seven Years War 1750-1764. with Prussia, was wounded and retired after making peace in the rank of second major. The officer was also the father of the brave Ulana Dmitriy Aleksandrovich, who was famous for his charity and even built the church at his own expense.

Hereditary officer, Mikhail Dmitrievich Oshanin was born in 1808, and the question of which career to choose was not for him. After graduating from the Moscow Cadet Corps, he graduated from the course in a special training unit and in 1827-m was assigned to the Ukrainian Uhlan regiment with production in cornets. By the beginning of the Crimean War, Mikhail Oshanin, who was part of the Belgorod Lancers' Regiment, had served in cavalry for more than a quarter of a century. Over his shoulders were a difficult war with rebellious Poland and participation in the bloody storming of Warsaw, on his chest - three military orders. In 1853, the distinguished captain Oshanin was granted a lieutenant colonel position. In the spring of 1854, the Belgorod lancers stationed on the outskirts of Odessa, where they were transferred to reflect a possible enemy landing.

And on April 20, when nine British and French steam frigates fired at Odessa, from the other ships of the Allied squadron, which was kept aside, the 19 boats with paratroopers were sent. However, the attempt of the British and French to disembark a few miles from the city was beaten off. Marines fired at the Russian artillery, then cavalrymen arrived.

in the end, the boats, having not landed a single person, hurried back under the protection of warships. The Belgorod Lancers 20 of April showed courage and resilience, conducting demonstrations to intimidate the landing under the fire of enemy ships. The record of Colonel Mikhail Oshanin, now stored in the State Archive of the Vladimir Region, states that this officer of 20 on April 1854 participated in the defense of Odessa "when an Anglo-French squadron of 19 battleships and 9 of steam-ship frigates appeared on the Odessa raid and the city was announced in blockade position "

On the morning of April 30, in a thick fog in 6 versts from Odessa, under the steep bank of the Maly Fontan, the English 16-gun steam frigate Tigr, which followed along with two other steam frigates Vesuvius and Niger, sank along an alley. Attempts by the team to withdraw from it were unsuccessful. At first, because of the fog, the steamer was not visible from the shore, but then a gardener passing by accident heard English speaking and noise, as reported to the equestrian picket. When the fog was a little different, it turned out that the stranded frigate is just 300 meters from the coast.

Immediately, several artillery batteries and cavalry were pulled up to that place, including the division of the Belgorod Uhlan regiment commanded by Lieutenant Colonel Mikhail Oshanin. After shelling a steamer from field guns, his commander Giffard was seriously wounded, and several sailors were also injured. The dismounted cavalrymen, immersed in boats, decided to take the frigate to board the ship, as happened in the time of Peter the Great. But it did not come to the assault, as the British lowered the flag and surrendered.

The 24 officer and the 201 sailor were taken prisoner, which the cavalrymen brought ashore. When a convoy of prisoners walked to Odessa, on the approach to the city, the British saw tall pillars with crossbeams from the swings, which, according to the custom of the time, were used on the fair that had just ended. Frightened by their own command, which inspired subordinates to fear about the Russian atrocities against the prisoners, the sailors from the "Tiger" took the swing by the gallows and decided that they were being led to the place of execution. Some Britons even began to cry. But the prisoners were treated well, and after the war, all of them, except for the brave captain who died and was buried in Odessa, were sent home to England.

They managed to bring some of the trophies to the shore when the Tigra was taken to the bank, when Vesuvius and Niger, seeing that their fellow was captured by the Russians, tried to tear it off. They failed because the Russian artillery re-opened fire. After a long bombardment of "Tiger", which by that time there was not a single person, exploded. 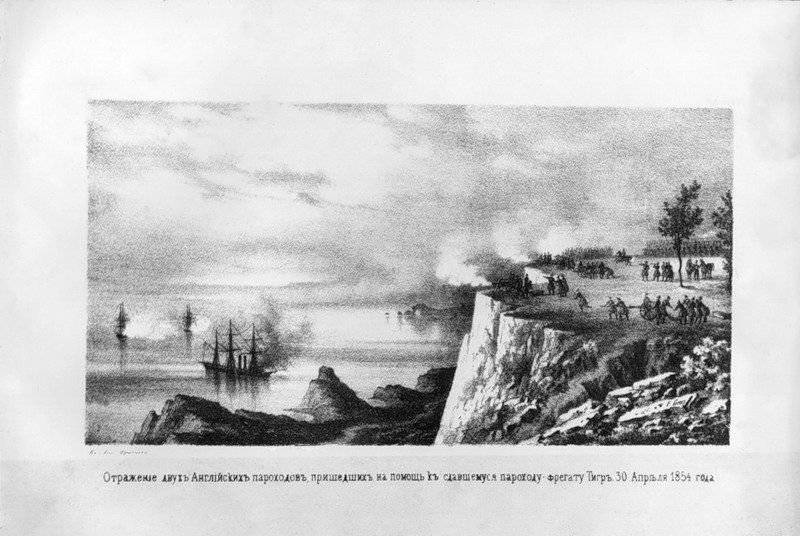 However, its body for the most part remained intact. Later, with the help of divers, they removed the latest English steam engine. The steam frigate "Tiger" with a displacement of 1200 tons was built just 4 years before the start of the war as a yacht of the English Queen Victoria, and then included in the military fleet. In order to humiliate the “mistress of the seas”, Emperor Alexander II ordered the construction of the imperial yacht of the Black Sea Fleet, name it “Tiger” and install a ship from the sunken “Briton” on the ship, which was done. The flag of the English frigate was deposited at the Naval Cadet Corps in St. Petersburg. 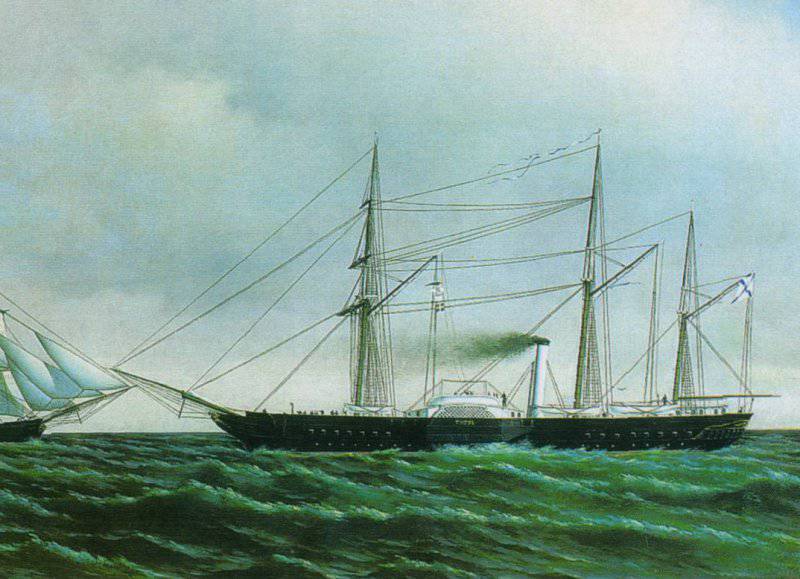 Lieutenant Colonel Mikhail Oshanin for bravery in the defense of Odessa was awarded the orders of St.. Stanislav II degree and of sv. Anna IV degree "For courage." In total, Mikhail Dmitrievich had six military orders, including the officer cross of St. George IV degree. In 1858, he retired with the rank of colonel "with his uniform and full salary pension." The colonel spent the rest of his life in his native Vladimir province. He passed away in August 1877 at the age of 69. The capture of the "Tiger" was perhaps the most striking episode in the 30-year career of this honored officer.

It is curious that the English cannons shot from the Tigger were long kept in Odessa, and in 1904, in honor of the 50 anniversary of an unusual battle, one of these guns was installed on Odessa Primorsky Boulevard. There, even today, everyone can see it, including the heirs of the western “gunboat diplomacy”, who are still sending missiles frigates and destroyers to the Black Sea to put pressure on Russia. Perhaps now is the time to remind them of the pitiable fate of the British "Tiger" ... 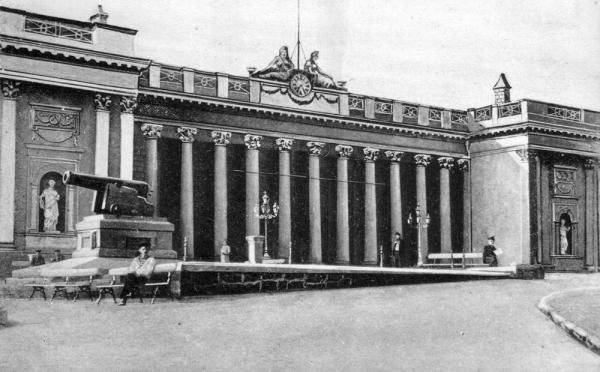 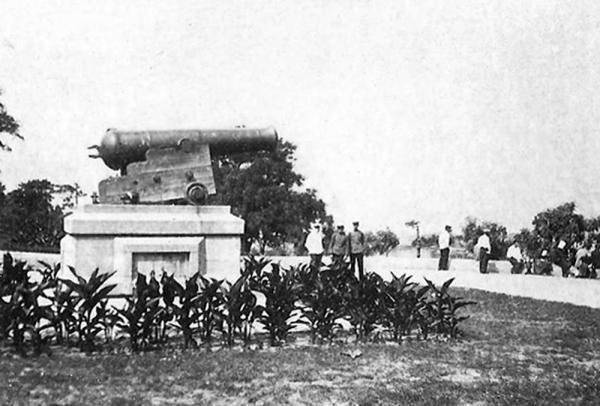 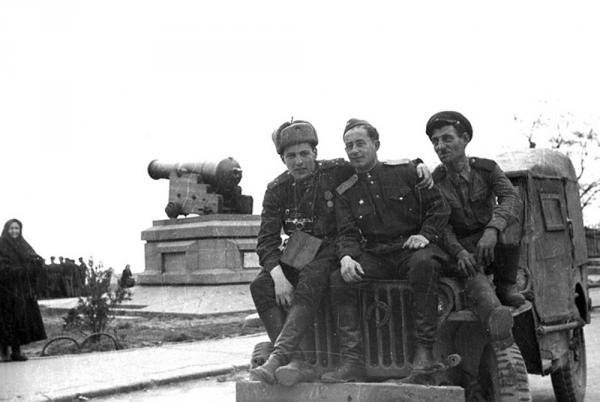