Why Moscow sparingly responded to the results of the referendums in the DNR and the LC?

14 May 2014
281
In the Donetsk and Lugansk regions (People's Republics), the results of Sunday referendums were summed up; however, despite the seeming unequivocal expression of the will of citizens, the situation after the plebiscite looks far from unequivocal. To begin, let us recall the results: the turnout in the Donetsk People's Republic (region) was about 75%, of which slightly more than 89% voted on the act of state independence of the DPR; in the Luhansk region more than 96% voted for the sovereignty of the LNR. In Kiev, which, for understandable reasons, did not send any official observers (except for the "observers" of the NAZI-Guard fighters) to the east, they said they were confident that the results were falsified, declaring that the total number of those who had come to referendums in two regions barely reached up to 30%.


So what is the ambiguity of the referendum held in the eastern regions of Ukraine? Naturally, the main pole of such ambiguity is far from the difference in data from Donetsk and Lugansk on the one hand, and Kiev on the other. The main thing is that the referendums seem to have taken place, but, as they say, no further movement was made on their basis. More precisely, there were attempts at movement, but they looked rather strange.

Already after the announcement of the preliminary results of the plebiscite from the DPR, a call was made for Russia to accept the republic as a federation with the rights of a subject (according to the Crimean variant). This appeal was voiced by Denis Pushilin - the head of the provisional government of the DPR. From circulation: 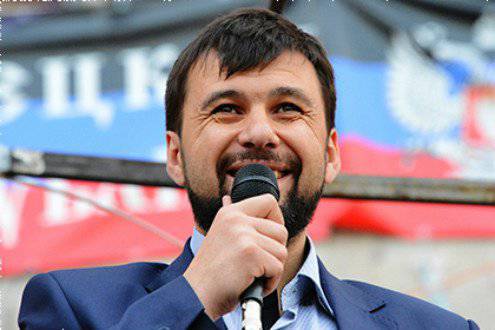 Moscow responded to this appeal in such a way that it is more likely to speak about the absence of a reaction. They reacted not so much to the words of Denis Pushilin, but to the results of the referendum. For example, a reaction of this nature came from the State Duma of the Russian Federation: legislators said that the referendums in the LPR and the DPR were an attempt by the local population to protect themselves from the Kiev junta. That is, the deputies uttered the word “referendum”, but they didn’t extend the recognition of its results. Approximately the same reaction was demonstrated by other branches of the government of the Russian Federation, expressing an understanding of the desire of the people of Donetsk and Luhansk to resolve issues of self-determination.

Press Service of the President of the Russian Federation (quoted Interfax):

Moscow treats the will of the population of Donetsk and Lugansk regions with respect and proceeds from the fact that the practical implementation of the results of the referendums will take place in a civilized way, without any recidivism of violence, through dialogue between representatives of Kiev, Donetsk and Lugansk.

The situation got even more confused after the speech in the Donbas of the co-chairman of the DPR government Miroslav Rudenko, who said that the discussion of the topic of the annexation of the Donetsk People's Republic to Russia today is clearly premature.

Currently, this question (talking about the entry of the DPR into the Russian Federation - note "VO") is not so relevant. Now there should be a legitimization of the power of the Donetsk People's Republic. Of course, we will turn to the Russian Federation regarding the recognition of this referendum, but first of all we see the goal in the struggle for liberation from the Nazi occupation of the southeast. This is the first task. Now, at the present time, we consider it a premature discussion. In the future, we would like a civilized divorce (with Ukraine), but now, thanks to the efforts of the junta, it goes very uncivilized. Now there are occupying troops on the territory of the republic that carry out acts of terrorism and genocide of civilians. All this needs to be stopped. Of course, it would be good to do this by political means, but for now deterrence is taking place by armed means.

So, to the colorful picture, which began to be created even before the Donbass plebiscite, more and more new colors are added. On the one hand, elementary security of the population of the southeastern regions, which declared its state independence, is at stake, and on the other hand, global geopolitics, in which every nuance at a certain stage of implementation can play a crucial role.

Today the situation is that the Russian president, after advising Lugansk and Donetsk to postpone the referendums, turned out to be unheard of. Referendums were held, but here’s no lightning recognition of the DPR and LPR from the Russian Federation. Immediately, there appeared something clearly similar to the inconsistency of positions in the leadership of the new republics themselves, when some leaders directly appeal to Russia to take these republics into the Russian Federation, while others insist that now, they say, is not the time. What does this situation indicate? At a minimum, the fact that the Lugansk and Donetsk plebiscites were clearly not similar to the plebiscites in the Crimea and Sevastopol, that the Donbass had not yet decided on the backbone of power that had already manifested itself in the early days of the well-known Crimean events. This situation may testify that the level of contacts between Moscow and the DPR with the LPR is not at all what it was when resolving the Crimean situation.

But there is more. Moscow gives Kiev another chance to conduct, let's say, work on the bugs — sit down at the negotiating table with the southeast and reach consensus. The message seems to be the following: if Kiev continues to act against its own citizens as yet with the same methods that Mikhail Saakashvili distinguished himself in South Ossetia, then the Kremlin may well go to the South Ossetian and Abkhazian variant - to recognize the independence of the republics of Donbass . That is, Kiev is given to understand that there are all chances for Donetsk and Lugansk, and Kiev itself as such, to remain within the framework of the “single country” today, and can use these opportunities by taking their punishers from the southeast. If Saakashvili likes the script more, the Kremlin will simply say: sorry, guys, but this is your choice, and you have done it ... She can personally ask Saakashvili about what the Kiev junta can expect further ...

In the end, Moscow has not openly declared recognition of the independence of the DPR and the LPR, possibly also because it has Yanukovych. Yes ... the same one ... After all, the upcoming presidential elections in Ukraine are a real fiction, and therefore the trump card in the form of whatever the legitimate president who advocates for non-violence, for unity, for respecting the rights of national minorities, for freedom of speech, can still play its role. And here even all the giant disadvantages of Yanukovych (with his love for expensive cars, multi-tiered mansions and fast running ...) against the background of the terrible crimes of the Kiev junta, Ukrainians themselves will not seem so gigantic ... Everything is known in comparison – wisely ...

Ctrl Enter
Noticed oshЫbku Highlight text and press. Ctrl + Enter
We are
Situational analysis of the death of the MH17 flight (Malaysian Boeing 777), made on the basis of engineering analysis from 15.08.2014The West opposes the people's will in the Crimea and is preparing sanctions for Russia
Military Reviewin Yandex News
Military Reviewin Google News
281 comment
Information
Dear reader, to leave comments on the publication, you must sign in.