In 1952, the JNA Infantry Department demanded to start developing a new anti-tank grenade launcher, which in the near future was to replace the complex and ineffective М49, as well as to add imported weapons. A request for the creation of a new weapon was sent to the Military Technical Institute (Belgrade) and to the Krusik factory (Valevo). As a platform for the mass production of new weapons was considered the plant "Red Dawn" (Kragujevac).

For several months, army experts had to review and analyze three projects of new grenade launchers. Thus, the designers of the Military Technical Plant (the town of Valjevo), under the leadership of A. Meshichek, presented a modified version of the previous rocket launcher of the M49 RBD. From the original version, the new project was notable for simplifying some elements of the structure. In addition, the weapon was simplified through the use of new manufacturing techniques. At first, the upgraded and simplified M49 interested the military, which led to the appearance of an order for a batch of experienced weapons of this model. Nevertheless, the production of a new grenade launcher remained quite complicated, which is why JNA lost interest in it.

Soon there was another version of the modernization of the RRB M49. This time, the specialists of the “Red Gate” took up the task. They created a new trigger mechanism and a propellant propellant ignition system. Now the grenade launcher was supposed to use not small-caliber cartridges, but primers-igniters. Caps were placed in a six-cell drum. The characteristics and capabilities of such a system were considered fairly high, however, this modernization of the M49 grenade launcher did not interest the military. During the analysis of the project, it was found that such weapons do not meet some of the most important customer requirements. After this, no attempts were made to upgrade the M49.

The third project submitted for the competition was developed by Todor Cvetich from the Institute of Armaments. Cvetich used some developments of other engineers, and also applied a number of new technical solutions. For example, he managed to simplify the production of grenade stabilizers, as well as increase the reliability of the propellant ignition system. An over-caliber grenade with a maximum case diameter of 90 mm received a tail tube with several slots, as well as spring-loaded stabilizer planes. Before the shot, the grenade thrower had to push the stabilizer planes into the slots and place the tail of the grenade in the barrel. After leaving the barrel, the stabilizer opened and made the grenade rotate. In the tail of the grenade was placed propellant charge - 93 g of gunpowder. New ammunition received its own primers-igniters. Two caps were placed on the tail tube, next to the propellant charge. It was assumed that in the event of a misfire of one of the blasting caps, the grenade launcher would be able to turn the grenade on 180 ° and fire a shot using the second. 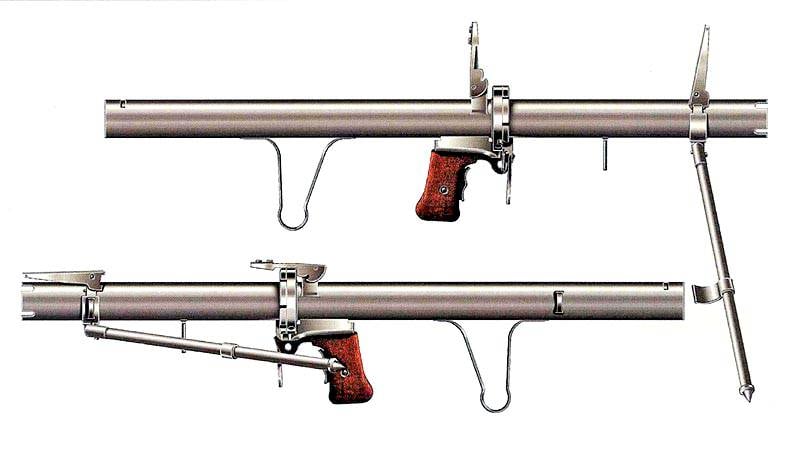 A drawing of an experimental grenade launcher arr. 1952

The cumulative warhead of a new grenade could penetrate 270-320 mm of homogeneous armor. The successful combination of power of the propellant charge and the weight of the grenade made it possible to ensure a sufficiently high initial velocity of the ammunition - 145-150 m / s. The sighting range when shooting at moving targets was 200 meters, and at fixed targets up to 400. Initially, the grenade was equipped with the M57 percussion fuse, and later it was equipped with temporary-inertial M61.

The grenade launcher of the T. Tsvetich system had a 44 caliber mm barrel with a 960 mm length, on the outer surface of which various mechanisms were installed. The grenade thrower could use an open sight or an 3,8 multiple optical M59 (12 ° field of view) for targeting. In front of the barrel, a folding bipod was attached, in the middle - a pistol grip with a trigger mechanism (USM) and a shoulder rest. For carrying the weapon was equipped with ankens for the belt. The external elements were attached to the barrel with the help of special rings and welding.

The design of the USM of the new grenade launcher was quite complicated, but allowed to simplify the operation of weapons. In front of the pistol grip with a trigger there was a cylindrical casing of the percussion mechanism. Inside it were a drummer, a mainspring and some auxiliary mechanisms. The principle of the USM grenade was borrowed from so-called revolvers. double action. The trigger mechanism was constantly ready to go. When pressing the trigger, the components of the mechanism took the drummer to the lowest position and released it. Under the influence of the mainspring, the drummer went back and hit the grenade on the cap. For the next shot it was enough to put in the barrel a new ammunition. 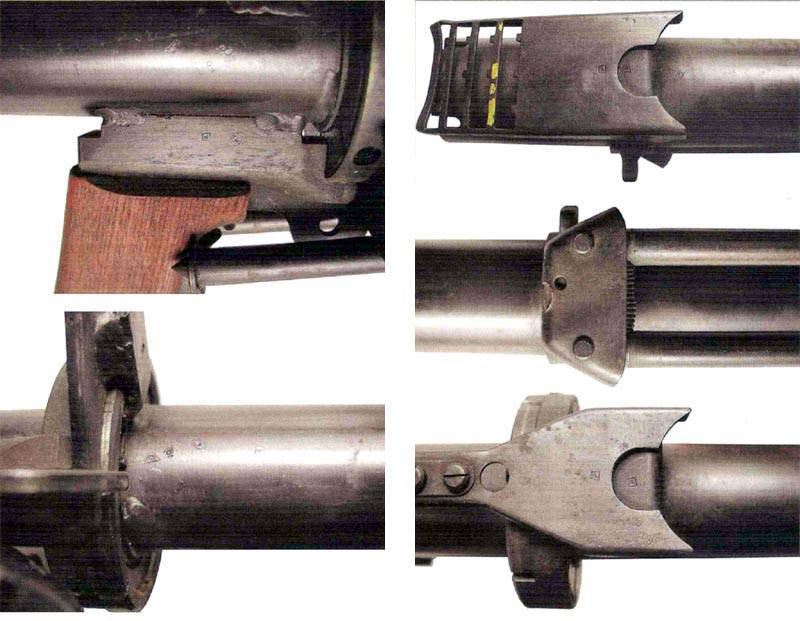 The new grenade and the original USM, not needing small-caliber cartridges, were highly appreciated. The military gave the go-ahead for the production of experienced grenade launchers. In 1956, the preparation of the documentation was completed, and shortly thereafter the Crvena Zastava plant produced the first 15 grenade launchers of the Cvetich system. Tests of this weapon were no serious complaints, and all identified deficiencies were promptly corrected. In 1958, a new batch of 50 grenade launchers was assembled, designed to carry out military tests. By this time, the finishing of the grenade launcher was completed, which allowed him to successfully pass and tests in the army. The weapon was put into service under the symbol of the Republic of Belarus МХNUMX. 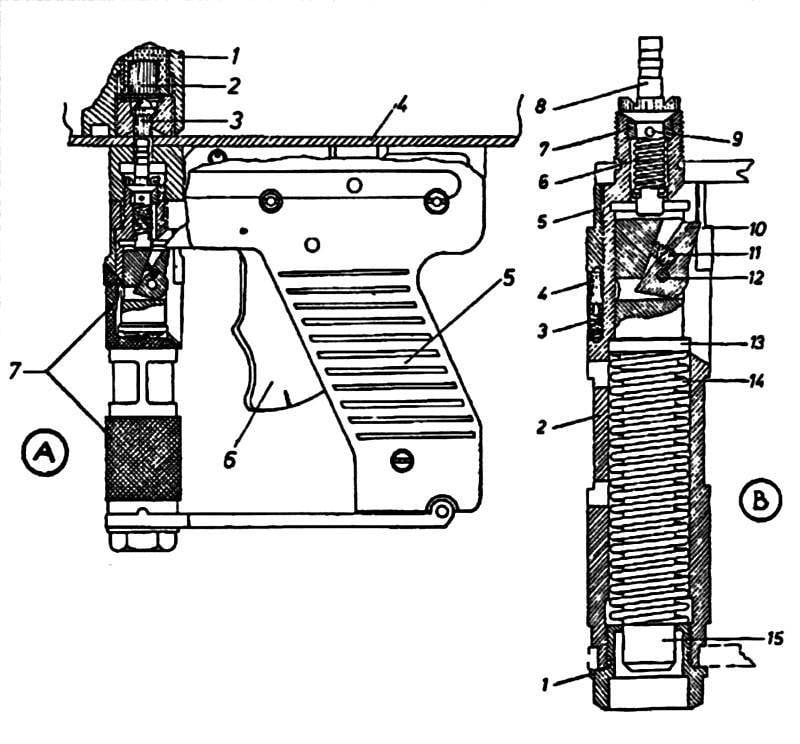 Serial production of new weapons started in the late fifties. The hand-held anti-tank grenade launcher RB МХNUMX allowed to significantly increase the firepower of infantry units. However, during the operation revealed some shortcomings associated with manufacturing techniques. In 57, parts began to receive complaints about cracks in the trunk in the area of ​​the rear back end. This part was attached to the grenade launcher by welding. As it soon turned out, it was the incorrectly chosen welding method that weakened the metal of the barrel and provoked its cracking under the action of mechanical and thermal loads. In order not to write off a large number of weapons, it was decided to take a number of measures. Under the conditions of the army workshops, 1964-mm galvanized steel wire was wound on the back of the M57 stem. In addition, the weapon received a new ring for attaching the rear leg and shoulder rest. Such a grenade launcher received the symbol "M1,5 repaired."

In order to avoid damage, new grenade launchers began to equip the barrel with a thickened rear. They continued to use welding to fasten the outer elements, but changed the technology. No further complaints of cracks were reported. The upgraded anti-tank grenade launcher with a thickened barrel was designated the M57A1. A little later, the M57A2 modification appeared. It differed from “А1” by fastening rings of the shoulder rest and refined swivels recessed into special recesses.

The production of Tsvetich grenade launchers in the basic version was carried out at the factory “Redden outpost” from 1958 to 1966 years. During this time, 26000 was manufactured by RB M57 grenade launchers. According to some reports, shortly before the end of the production of the base model, the plant began to produce it in a “renovated” version. The M57А1 grenade launcher was not produced for long and became the least mass weapon of the family: in 1965-67, the “Red Gate” transferred only 4331 units of this weapon to the troops. In 1967, the massive assembly of M57A2 grenade launchers began. Until the mid-fifties, JNA received 12600 grenade launchers of this modification. 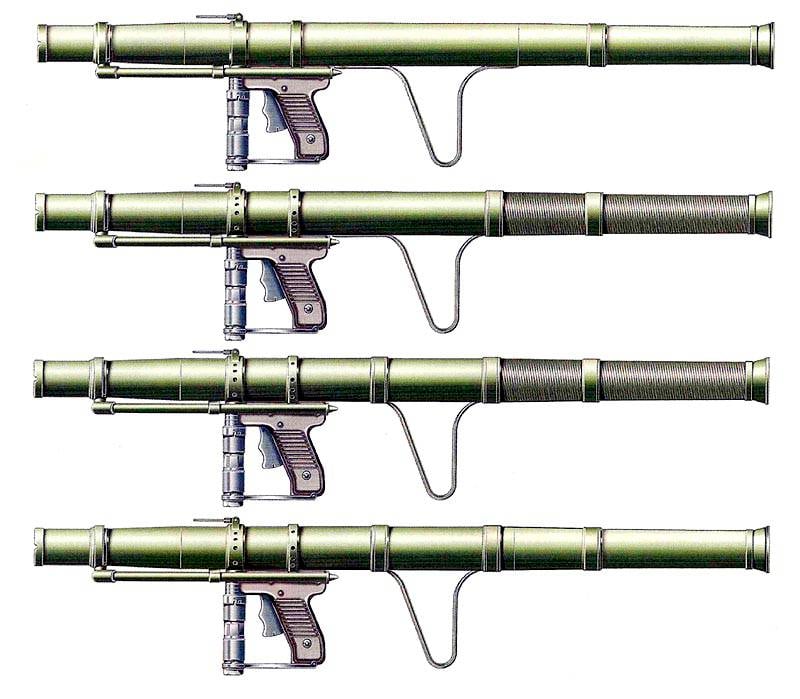 The hand-held anti-tank grenade launcher RB M57 designed by T. Tsvetich turned out to be one of the most successful and successful developments of the Yugoslav gunsmiths. М57 and its modifications have been actively used for several decades. It should be noted that in the first decades, the Yugoslav military used these weapons only on firing ranges during firing and exercises. The combat use of the M57 and its modifications began in the nineties. The grenade launchers of the family, which were widely distributed, were actively used in all Yugoslav wars in parallel with other anti-tank weapons.