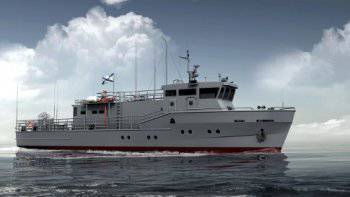 According to the "Military Industrial Courier", with reference to the press service of the Southern Military District, Caspian sailors flotilla started the development of two new raid boats of integrated emergency and rescue support of project 23040, which were built by OJSC Nizhegorodsky Ship Ship Plant.


It is noted that the crews will have to master the new joystick control system of the boat, which facilitates the work on its retention and accurate maneuvering in difficult weather conditions. Training takes place under the control of the factory team.

In addition, a series of training sessions is planned for the development of a small-sized remote-controlled uninhabited underwater vehicle, a thermal imaging system for night vision and a towed sonar. Also, the sailors will learn the latest equipment to perform search, survey and diving work at depths up to 60 meters and swell up to 3 points.

23040 boats can be used for rescue operations at sea and on the river. In particular, they have installed equipment for supplying power to an emergency vessel or object. They can also be used for search and rescue, diving, environmental, fire and other types of work. The installed equipment allows you to extinguish fires on ships and ships, coastal and floating objects up to 30 meters.

In total, the search and rescue service of the Caspian Flotilla will receive three boats of the 23040 project, the state tests of which will take place from June to November of the 2014 year.