Separatism and the struggle for independence: a thin American side

14 May 2014
35
The West does not always withstand the heat of propaganda. And not all journalists are State Department's “pre-institutes” and are funded from the federal American budget, that is, with money being duped by taxpayers. No, no, yes, and you hear from the mouth of an American, as well as a European reporter, an impartial judgment. 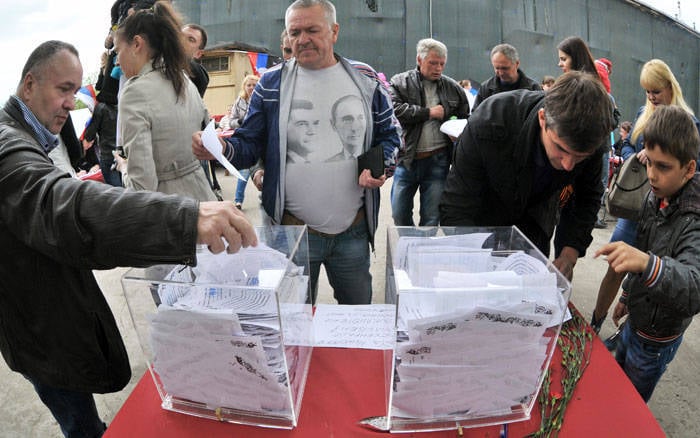 In the program "Vesti" is a fragment of the plot of the correspondent of the German television channel "En-24" Christopher Wanner. Being in Donetsk at the referendum, he said: “Everything is peaceful! I want to show how everything looks at this polling station in Donetsk, what is happening here. The flow of people is huge, we ourselves are amazed by this, because we thought that many people simply would not find polling stations because of the chaos in the organization. ”

Yes, the American media continue to call supporters of federalization the separatists, Vesta correspondent Anna Baldina says. But the commentators under the text of the articles remind: American statehood is based on the idea of ​​self-determination. So is she alive, this true American democracy?

Humorists on Twitter tweaked the American television channel CNN, which made a geographical discovery: in a report on Ukrainian referendums, placed Ukraine on the territory of Pakistan on a map ...

The site "Russian Spring" An entirely objective report of The Sunday Times journalist B. Pantsevsky, who spoke with volunteers of the National Guard in Mariupol, is given.

The journalist was able to talk with the fighters of the battalion "Azov" - a paramilitary detachment created, among other things, by the Ukrainian Interior Ministry. The fighters showed up in the forest near Mariupol. Their headquarters was located on an island surrounded by a pond, in a hunting house of a local oligarch who sympathizes with Kiev.

Seeing the correspondents, the fighters surrounded them with shouts: “How did you hear about us?”, “Are you Russian spies?” The journalists were threatened weapons.

“We are in the rear of the enemy here, everything is against us: the police, the army, the people. We do not trust anyone, ”one of the fighters with a tattoo on his arm in the form of a Nazi symbol explained his nervousness.

Earlier, one witness described Pantsevski as "people in black" opened fire on civilian protesters in the city. First, these members of the paramilitary units began to fire in the air, and then at the protesters.

“It was chaos,” said one of Azov. He added: “The various paramilitary groups could not coordinate with each other, which led to a catastrophe. The aversion among local residents to bloodshed was such that Mariupol is now “lost” in favor of the separatists. ”

Opinion of political analyst Robert Perry publishes "Reedus" with reference to Consortiumnews.com. According to the expert, ordinary residents of the United States do not know the truth about the events in Ukraine. They do not know because the American media is now busy with propaganda.

Perry writes that his colleagues are silent about the fact that armed gangs of neo-Nazis took part in the seizure of power in Kiev. "The Kiev regime sent the so-called" self-defense "of the Maidan, formed from neo-Nazis, to the south-east of Ukraine, so that they would kill and burn Russians in their homes, and ordinary American people do not know anything about this," the journalist writes.

Perry, who has extensive experience in political analysis and worked in the 1980-ies. in Central America, stresses that the State Department is not the first time using local extremists to achieve their goals in certain countries. In Central America, the “death squadrons” were associated with pro-American regimes and were recruited from neo-fascist organizations. In Afghanistan, the CIA attracted Islamic extremists. According to the same scenario, the US government operates in Ukraine, the expert said.

Michel Chossudovsky, the founder of the Center for Globalization Studies, a professor of economics at the University of Ottawa, says that the Western media have avoided using the concept of “Nazi” in materials devoted to Ukrainian events. For example, they call the participants of the “Right Sector” “patriots”, ultraconservatives - “freedom fighters”. But all of them, the professor notes, use Nazi symbolism and call their idol Bandera.

Even Mr. Kissinger believes that Putin did not attack Ukraine. He said: “We need to ask ourselves the following question: he spent 60 billion dollars on the Olympics. There were opening and closing ceremonies of the Games, which sought to show Russia as a progressive state. It is incredible that after three days he would have attacked Ukraine. ”

Finally, as reported by the site 2000.net.ua, the New York Times newspaper, represented by Andrew Kramer, a correspondent in Donetsk (there were three more reporters with him), was convinced both of the reality of the referendum and the presence of a considerable number of people at polling stations.

“The atmosphere at the polling stations in Donetsk, the capital of the region, was festive: the entrances were decorated with balloons, and Soviet-style songs flowed from the speakers. Families with children stood in long lines to wait for a turn to vote.

Many voting people spoke of the hope that their voting would strengthen unity in the self-proclaimed independent republics of Donetsk and Lugansk and would allow an end to the violence in the region. Roman Agrizov, a 40-year-old metallurgist, wants his voice to be a signal for the withdrawal of troops from eastern Ukraine by the central government. “I vote because I do not want war,” he said.

Quite objectively (and at the same time subjectively, considering the occupation) German businessmen are disposed towards Russia. According to Spiegel, top managers of the companies “E.ON”, “Metro”, “BASF”, “Daimler” go to Russia with the aim of participating in the St. Petersburg Economic Forum.

The journalist (with displeasure) reminds that "leading international top managers" canceled their visits, but "some die-hard German business leaders still want to pay their respects to Putin."

Maybe the Spiegel journalist Klaus Heking would like the "die-hard" German businessmen to worship someone else, for example, Obama, but for some reason many Germans do not favor Obama.

In the most recent online survey of the same "Spiegel", the majority (almost three-quarters) of respondents appreciated B. Obama's foreign policy as negative.

And the last assessment just says that the American anti-Russian propaganda leads to the opposite result: the "die-hard" persist in the love of Putin.

Thanks to propaganda borrowed from the era of the Cold War, B.H. Obama is about to lose those pitiful remnants of trust that a small part of the foolish electorate is showing him. However, he doesn't care about the electorate: there will be no third presidential term.

Observed and commented on Oleg Chuvakin
- especially for topwar.ru
Ctrl Enter
Noticed oshЫbku Highlight text and press. Ctrl + Enter
We are
Situational analysis of the death of the MH17 flight (Malaysian Boeing 777), made on the basis of engineering analysis from 15.08.2014Results of the week. “I am a prince! What I want - and I turn back ... uh ... I act in the interests of the state "
Military Reviewin Yandex News
Military Reviewin Google News
35 comments
Information
Dear reader, to leave comments on the publication, you must sign in.