The Empire Strikes Back

13 May 2014
296
12 May entered history as the day of "discharge" of Russia of the next package of sanctions. In parallel, the West prescribed medicine to the Ukrainian “separatists”. Three Russians, four representatives of the authorities of Crimea, six Ukrainian supporters of federalization, as well as two Crimean firms were hit by the EU. This is the third expansion of the “black list” by the European Union. And there is reason to believe that the West will not stop there. 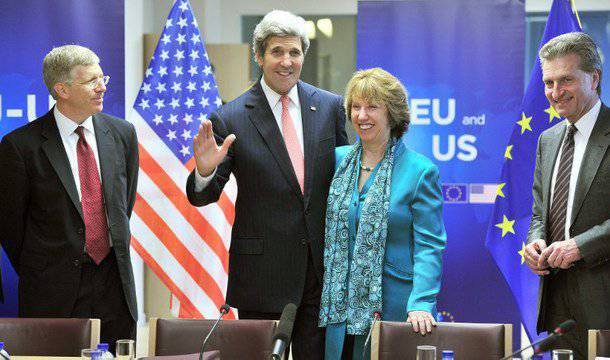 The people and companies on the list are listed in the EU Journal. Of the Russian personalities, Vyacheslav Volodin, first deputy head of the Russian presidential administration, Vladimir Shamanov, commander of the airborne forces, and Vladimir Pligin, state Duma deputy, were "punished".

Ukrainian supporters of federalization were also included in the sanctions list: the people's mayor of Slavyansk V. Ponomarev, militia leaders I. Bezler and I. Kakidzyanov, head of the CEC of the DPR R. Lyagin, head of the CEC of Lugansk A. Malykhin, deputy of the Verkhovna Rada O. Tsaryov.

How were they all punished? Equally: all persons involved were banned from entering the European Union. In addition, their money in European banks are subject to freezing. True, this money has yet to be found.

The EU Council also decided to freeze the European assets (again, when they were located) of two Crimean companies: Chernomorneftegaz and Theodosia. The reason for the sanctions against these firms was the accusation of the Crimean authorities that the companies were “confiscated”.

“Because of the Crimean issue and the aggravation of the situation in Ukraine, we decided to extend the sanctions against 13 Russians,” said EU High Representative for Foreign Affairs and Security Policy Catherine Ashton. - They will be subject to visa restrictions, and their accounts in European banks will freeze. Thus, a total of 61 people are now under EU sanctions. The assets of two enterprises in the Crimea will also be frozen. ”

As stated by Deputy Foreign Minister of the Russian Federation S. Ryabkov, Moscow regrets the imposition of sanctions against Russia, but finds this step unworthy of the European Union. In addition, Comrade Ryabkov gave an unflattering characterization by the authorizing himself: “We regret that the sanction team is rolling downhill, as if there is no driver in it - absolutely thoughtless, irresponsible and in no way correlated with reality”.

Ryabkov added: “Instead of worrying about a real improvement in the situation, de-escalation, disarmament of the“ Right Sector ”, establishing a direct dialogue between the Kiev authorities and the regions, colleagues from the European Union demonstrate one-sidedness, one-dimensional nature of their policies that are not worthy of the European Union.”

Published and official statement with on the website Ministry of Foreign Affairs of the Russian Federation.

It notes that "the decisions of the EU Council on Ukraine cause deep bewilderment by the persistence of the European Union, continuing to replicate lengthy statements that do not tally with the real situation in this country."

The Russian Foreign Ministry advised Brussels to stop “seeing in large part of the Ukrainian people, not accepting the Kiev authorities,“ pro-Russian separatists ”and understand that without recognizing the internal nature of the deep Ukrainian conflict, it will not be possible to resolve it”.

The Foreign Ministry also advised the European Union "to respect the results of the referendums held by residents of the Donetsk and Luhansk regions and to promote the will of the people to be implemented in a dialogue between representatives of Kiev and South-East of Ukraine."

The Russian Foreign Ministry completed its message to Europe with the following paragraph: “Not wanting to recognize the realities that have developed in Ukraine as a result of events resulting from the anti-constitutional coup in Kiev, and continuing the vicious anti-Russian sanctions logic, the EU undermines its credibility as a partner and puts under doubt of claims for an objective role in facilitating the settlement of the internal Ukrainian conflict. ”

In the meantime, Canada joined the EU sanctioner. Prime Minister Harper described the situation in Ukraine as a violation of peace and security and said: "The aggression of the Putin regime will not remain unanswered."

The Canadian black list has satisfied six Russians and as many citizens of Ukraine.

From our list are the chief of the General Staff of the Russian Defense Ministry Valery Gerasimov, Deputy Speakers of the State Duma, members of United Russia S. Neverov and L. Shvetsova, and one of the leaders of the militia operating in the rebel Southeast - Igor Strelkov.

Among the “sanctioned” Ukrainians, the list contains the following names: the self-proclaimed Lugansk governor German Prokopiv, the leaders of the DPR A. Purgin and D. Pushilin, and one of the leaders of the “People’s Militia of Donbass” S. Tsyplakov.

All these people are now prohibited from entering Canada and owning property there.

We will remind that earlier nineteen Russians and eighteen Russian companies turned out to be under the Canadian ban.

Another method of intimidation of Russia was chosen by the USA.

More than six thousand soldiers and officers are now participating in the large-scale NATO military exercises “Spring Storm” in Estonia. Victoria Nuland without any constraint stated that the maneuvers were directed against Russia.

According to US Assistant Secretary of State V. Nuland, the alliance intends to demonstrate strength in response to Russia's attempts to encroach on the territory of NATO member states. Her words leads the channel "RT":

““ We say to Russia in plain language: the territory of NATO is inviolable. And we are demonstrating all the means of intimidation in response to any attempts by Russia to verify this. We intensified the Polish-American training squads in the airspace of the city of Lusk. ”

At the same time, Nuland stressed that the “confident presence of the US Navy in the Black Sea” remains. Well, powerful foot forces: "In addition, we delivered a total of 750 US Army soldiers to Estonia, Latvia, Lithuania, Poland and Romania."

Well what do you say to this? First, the West in the face of the United States, the EU and NATO openly demonstrated the very policy that it once pursued against the USSR. This indicates that the Cold War, despite the announced “reset,” never stopped, but only changed stages. Secondly, by observing the brave American warriors nearby 750, the population of Estonia, Latvia, Lithuania, Poland and Romania can sleep peacefully. Russian will not pass.