Mass desertion in the army of Ukraine 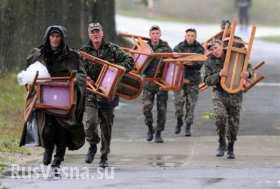 
The official website of the Zhytomyr City Council reports that the acting as commander of the A1494 military unit, Colonel R.S. Volkov, asked the city authorities to publish lists of soldiers called up to the Armed Forces of Ukraine during partial mobilization for a special period who left the location of the military unit without permission.

“In order to demonstrate their shameful act, please publish these lists in local and regional print media, inform the authorities at their place of residence,” he wrote.

It is worth noting that this is not the only case in the region. Earlier, the site of the Zhytomyr City Hall published a list of 102 soldiers from the A3091 military unit in Berdichev and A0409 in Novograd-Volynsky, who also deserted from the duty station.

It is worth noting that the unauthorized abandonment of parts threatens to be mobilized by five years of imprisonment. However, this does not stop deserters.

Ctrl Enter
Noticed oshЫbku Highlight text and press. Ctrl + Enter
We are
Reports from the militia of New Russia for 27-28 September 2014 of the year
Military Reviewin Yandex News
Military Reviewin Google News
86 comments
Information
Dear reader, to leave comments on the publication, you must sign in.