Army is waiting for the fifth generation of missiles 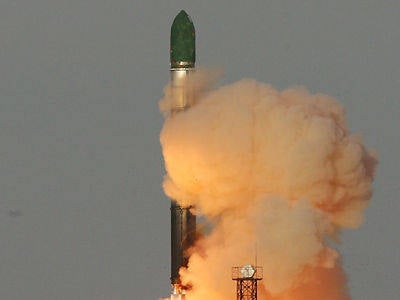 The Ministry of Defense has decided on the developer of a new heavy liquid-propelling ballistic missile, which should replace the world's most powerful intercontinental ballistic missile (ICBM), the R-36M Voyevoda (according to the Western SS-18 Mod.1,2,3 Satan classification) - "Satan".

This was announced by the former chief of the General Staff of the Strategic Missile Forces Viktor Esin.

“Satan” is the basis of our land grouping of strategic nuclear deterrent forces. Today, 58 of such missiles with 580 nuclear warheads deployed on them is on permanent combat duty. The machine is immune to the action of an electromagnetic pulse and can start from the mine, even if a nuclear warhead explodes in the vicinity. Will break through any missile defense system and deliver to the target, even in the other hemisphere, the megaton class 10 nuclear warheads and individual targeting. This is quite enough to wipe the city, or even the whole country, with one blow. However, by 2020, almost all of these missiles will serve their time, and they will need to be changed. Therefore, it was decided to develop a new rocket.

“The Defense Ministry is completing coordination with the manufacturers of the future intercontinental ballistic missile of a tactical and technical assignment for its development with the deadline for completion of state tests and adoption in the 2018 year,” said Viktor Esin. - The design bureaus of the military-industrial complex carried out a search research work, which on a competitive basis made it possible to determine the appearance of the future ICBM. This will be an intercontinental ballistic missile of a new, fifth generation, and not a clone of the "Voevoda" ICBM.

The work will be performed by the Makeyev State Rocket Center (Miass, Chelyabinsk Region). According to experts, the new missile, in particular, "lays down such innovative requirements so that it can guaranteedly overcome any anti-missile defense (including the space strike echelon)." At the same time, a deep modernization of existing heavy launchers of missile launchers, which implies their technological re-equipment, as well as a new level of fortification protection with the creation of elements of passive and active anti-missile defense, is provided for. This will significantly increase the survivability of silos of launchers from the enemy's impact as usual high-precision weaponsand nuclear.

As told to Izvestia in the military-industrial complex, the choice of Makeev Design Bureau, a traditional developer of strategic sea ballistic missiles, is due to several factors. The main one is that the company has experience in creating large liquid machines capable of carrying a significant combat load, and also has a serial plant in Krasnoyarsk, where one of the most successful Russian naval intercontinental ballistic missiles, RSM-54, Sineva, is being produced now. To complete the work on the new rocket Makeevtsy to be 2018 year.

On the other hand, it is puzzling that the development of a "land" missile was entrusted to "sailors." What this "castling" leads to is clearly demonstrated by the new naval ballistic missile "Bulava", created in the traditionally "land" Moscow Institute of Thermal Engineering. It is said that in the course of the competition the project won by the NPO Mashinostroyenia from Reutov. This company has traditionally been engaged in the creation of intercontinental liquid rockets. Its complex UR-100NUTTH along with "Satan" is the basis of the grouping of the SNF. They also had proposals that would drastically reduce the cost of developing a future rocket. However, preference was given to "sailors" from Miass - the chief customer of the product, Defense Minister Anatoly Serdyukov, is on the board of directors of this company.