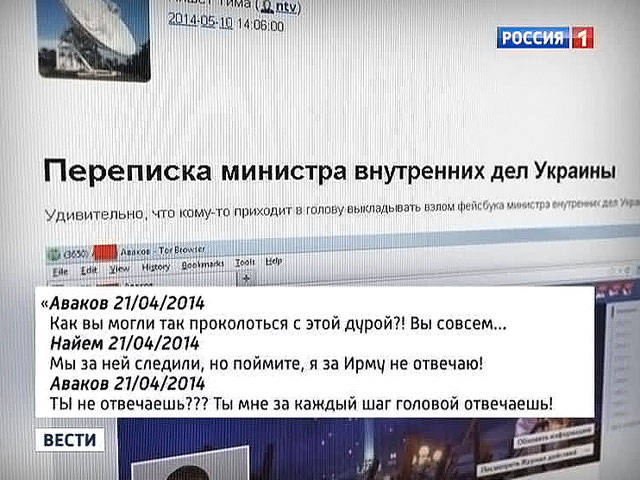 For the attempt on the mayor of Kharkov Gennady Kernes, most likely, is the head of the Ukrainian Interior Ministry Arsen Avakov. This is evidenced by the personal correspondence of the minister, which he led on Facebook. His mail was hacked by unknown hackers, and the letters were posted on the pages of the same social network. Judging by these reports, neither Avakov, nor his interlocutors, did not hide secrets and did not hesitate in expressions during correspondence.

Arsen Avakov - the minister living in a social network, apparently, was convinced that if the network is American, then all its secrets are protected almost at the level of the CIA. His hopes came down simple hackers. And on the Internet the details of his behind-the-scenes cases came up, starting with the commissioned assassination attempt on the mayor of Kharkov, Gennady Kernes.

28 April in Kernes shoot in the back for a run. And when in the end it turns out that he survived, Avakov wrote an angry letter to a man by the name of Balut. Igor Baluta is the new Kharkov governor appointed by Kiev.

Baluta: - You do not worry, I explained to you.

Avakov: - I want to say one thing: WHAT ... Igoresh? What the ...? We discussed everything last time, you promised that a person is reliable if you remember.

Baluta: - Yes, your people recommended him!


Avakov: - People may be mine, but for you personally, the essence is different: if Gesha is still alive, how long will you stay in your position in view of this?

Gesha is Gennady Kernes. Avakov called him like a friend during the last Orange Revolution, when they stood on one side of the barricades. In 2010 they clashed on the election of the mayor of Kharkov, where Kernes won. And so he acquired a vicious enemy, who, having become the acting Minister of the Interior, did not hesitate to even write a threatening SMS.

“Arsen Avakov has repeatedly stated that, taking such a position, he will settle accounts,” Gennady Kernes himself noted.

Well, and after Kernes did not allow Lenin to demolish the monument in Kharkov and urged that the supporters of federalization be listened to, for Kiev and Avakov he became a class enemy altogether.

Wounded Kernes decided to immediately send to the clinic in Israel. Relatives are insisted. And although there was a threat to life during transportation, a much greater risk was found, it turned out, to remain in the Kharkov hospital. All of the same correspondence: Avakov angry that Kernes is not finished off.

Avakov: - You could not even decide with the doctors!

Baluta: - You yourself know how many journalists there were.

As for the Ukrainian journalists. Avakov actively uses them in the information war - he recruits to the National Guard under the ranks and vice versa - under the guise of journalists sends militants from the Maidan to the east.

Irma Krat - a well-known centurion of Maidan - was detained by the militia near Slavyansk. In February, she shot at the "Berkut" and personally tortured those who disagreed with the Kiev coup. Now here is the representative of an independent media. For the unfortunate legend from Avakov flies in to the old maydanovsky journalist Mustafa Nayem.

Avakov: - How could you so pierce with this fool ?! You absolutely ...

Hiring: - We followed her, but understand, I am not responsible for Irma!

Avakov: - You do not answer ??? You answer me for every step with your head!

Hiring: - I remember that you yourself said that it’s time to send it to the crematorium for a long time.

Avakov: - So, keep it quiet in there! Everything!!!

By the way, seemingly angels from the women's hundreds now work from Slavyansk to Odessa as scouts and fire coordinators. All prepared in military camps. And they know very well how to quickly burn a person.

And one more leak "from Avakov". And, more precisely, the confirmation of already known information that Kiev sends foreign mercenaries to fight in the south-east. In a conversation with First Deputy Prime Minister Yarema, he discusses the financing of the new arriving party.

Avakov: - Now, while I understand those who have arrived ... I am engaged in distributing them in places and searching for translators. How is the next batch financed?

Yarema: - Igor allocates money, with this there will be no questions. It is important to strengthen Donetsk, Kharkov and Dnepropetrovsk!

Igor, "regularly allocating money," is most likely an oligarch, supplied by the governor of the Dnipropetrovsk region, Igor Kolomoisky, who now finances a punitive operation.