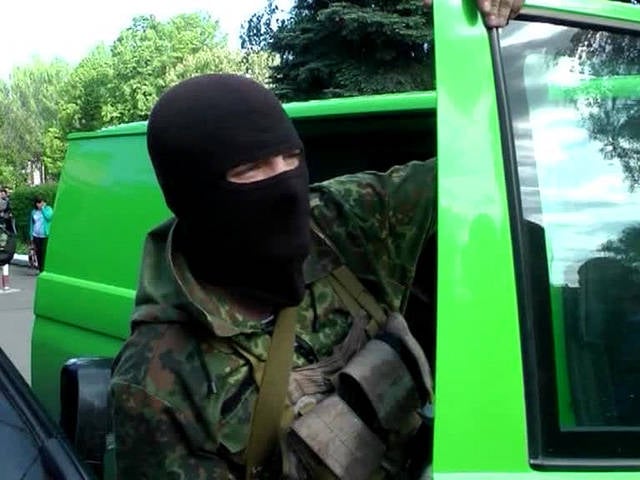 New details of the punitive operation of the Kiev authorities in the city of Krasnoarmeysk, Donetsk region, are becoming known. There, during the referendum, PrivatBank armored vehicles drove up to the polling station - the one that belongs to the Ukrainian oligarch Kolomoisky. Therefore, there is a version that the militants were from the Dnipro battalion formed by the same Kolomoisky.

Where the peaceful referendum took place yesterday, today is an island of mourning. People carry flowers to the photographs of two men, who were killed in cold blood by the main administrative building of the city in front of hundreds of people. “We stood here together, I went for cigarettes, and when I returned, my friend was no longer alive,” said an eyewitness.

When, in the midst of a vote, armored collection vans arrived at the administration building, people immediately realized that it was not for money. Families with children began to run away from the park, but those who gathered in the square were not going to go anywhere. The military in camouflage took the building into a ring. They had to keep the defense: the uninvited guests were received badly.

The commander of the militant detachment refused to introduce himself, but several times he clearly stated that the machine gunners belonged to the punitive battalion: "Buildings guarded by the special battalion" Dnepr "!" From whom the order came, the military never said, but executed it without question. Apparently, the miners and other unarmed people posed such a serious threat to the recruits that they did not hesitate to start shooting, aiming over people's heads and feet.

The operation was carefully planned: while some distracted attention with indiscriminate automatic shooting, a sniper worked from the windows of the building.

A person is killed by a shot in the chest, the trace of a bullet is clearly visible on his white sweater. Nearby, another wounded man is bleeding to death, a bullet literally crushed his leg and broke a bone. He will not be taken to the hospital, he will die on the way. Everything happens in front of hundreds of frightened residents and journalists.

Even these media loyal to Kiev open these eyes. On Twitter, Ukrainskaya Pravda journalist Yekaterina Sergatskova writes: “I have a shock. The military opened a line of civilians who protested that they were not allowed to vote in a referendum. One died, one was wounded. Now they are shooting, we are sitting under bushes.”

Bullets flew even to the top floors of neighboring houses. In one of the apartments on the 9 floor, the head of the family and a small child only miraculously survived.

And miner Yuri Mykolenko, who just before 48 celebrated his birthday and businessman Vadim Khudich, the father of two minor children, are already dead. The military hastily leave the battlefield, leaving behind only bullet cases and pools of blood. In a hurry, the military leaves a pack of cigarettes on the table of a captured building. In Ukraine, these are not sold. Either before the slaughter, the punishers visited the Duty Free shop, or cold-blooded mercenaries in the Dnepr battalion. For those who have not survived the attack, it does not matter.

Today in Krasnoarmeysk, the funeral of the next victims of the war with the people declared by the new Kiev authorities will take place. And this punitive operation does not stop. Today at the roadblock at the entrance to Krasnoarmeysk, the National Guard under soldiers shot a bus with miners. One person is seriously injured. According to local residents, a column of heavy equipment is moving from Dnepropetrovsk towards the city.