The West is vulnerable to its own weapons. 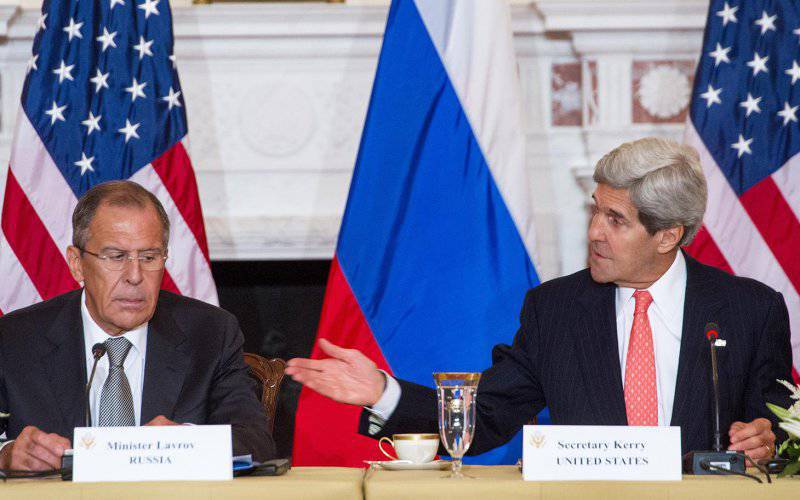 Russia's diplomatic position on the coup d'état in Ukraine is much more important for Washington than for Kiev. Ukraine is a weak-willed country subordinate to external players, while the United States is an interested participant in events in Eastern Europe. The United States does not understand how to respond to tough statements by Russia: sanctions against Moscow do not work, military maneuvers at the Russian borders also. How to be? The NATO bloc turned out to be pampered and loose, at least half of its members are completely unprepared for an active phase of confrontation with someone, including Russia. Washington is concerned that its former allies do not respond to patron’s calls, and is concerned about how to defend its interests in the future in Ukraine, Eastern Europe and the world at large.

Raging colossus with feet of clay

All Europe is closely watching how the events unfold in Kiev and the Donbas. True, everyone assesses what is happening in his own way: someone thinks that the protest of the Russian-speaking residents of Ukraine must be suppressed at any cost, and someone is afraid of a big war, and shudders nervously as soon as someone's blood is shed again. And by the way, there are much more pacifists than notorious warriors. In November, many perceived the Ukrainian crisis in a completely different way than they are now, and over the past six months, the number of Western countries willing to raise the white flag and return to the status quo increased markedly.

For example, this is evidenced by yesterday’s statement by the Ministry of Foreign Affairs of the Netherlands, where it is clearly stated that Amsterdam is not ready to impose third-level sanctions on Russia. Opinions that sanctions are an inefficient and extremely destructive tool are also adhered to in other states of the European Union, however, for diplomatic reasons, they are not openly reporting this. In this sense, the Netherlands can be called a pioneer - after Germany, of course, the first in a veiled form made it clear to everyone that it is not going to sacrifice business ties with Russian enterprises for the whims of a handful of American politicians.

In general, the North Atlantic Alliance is fragmented, and its members have not yet developed a common position on the issue of Ukraine. But half a year has passed! For comparison, in the 1990-1991 years, NATO countries during this time not only managed to isolate Iraq, but also brought troops to its borders in order to organize a military invasion. Yes, Uncle Sam has lost his former grip, flabby and aged. Now, with incredible efforts, the United States is gathering a handful of allies like Albania, Estonia or Poland for war, however, being aware of their incapacity.

The US itself does not feel any better than its vassals on the European continent. The country's defense budget has been steadily declining over the past few years, and endless wars in Iraq and Afghanistan have exhausted insanely both American soldiers and American society, which even the bombing of Libya in 2011 considers to be an obvious overkill and believes that in the coming years Washington should concentrate on internal policy for the restoration of the economy, destroyed during the global economic crisis.

If Barack Obama goes to war now, he will enter history USA as one of the worst presidents, worthy of contempt for their adventures. But, apparently, the head of the White House does not understand this: he knows that he will not be able to run for a third term, and dreams of being remembered as soon as possible by his compatriots by noble acts of a world scale. For example, another victory over the next "evil empire". For the sake of personal ambitions, Obama is ready to sacrifice the interests of his people.

How America wants to win

The President of the United States has support in law enforcement agencies. The other day, United States Secretary of Defense Chuck Hagel made a proposal to increase funding for the armed forces: they say, this corresponds to the priorities of Washington. He also 2 May said that "the actions of the Russian side confirm the importance of the existence of the NATO military bloc." Later, Hagel developed programmatic theses that, in his opinion, would help to win the confrontation with Russia. Here they are:

• The United States should not take the path of isolationism, contrary to the demands of millions of Americans;
• US military spending should be increased;
• Washington’s military-political presence in different parts of the world needs to be expanded and deepened;
• Allies of America need to be strengthened;
• it is necessary to prepare for a confrontation with Russia in the Arctic region.

Interestingly, Chuck Hagel separated the last item from the third; this means that the conflict between the Kremlin and the White House will not be limited to Ukraine, and will be “exported” to other zones adjacent to the borders of Russia and the Customs Union. Hagel’s theses could become a US program of action in Eurasia until the end of this decade.

In fact, even a dispute over Ukraine in itself is neither the reason nor the cause of American aggression: this is just the first step in a long series of similar conflicts aimed at weakening Russian influence in the CIS countries. The reasons are in a completely different plane - not regional, but geopolitical, where it is a question of the fate of not individual states, but entire civilizations. In essence, what we are seeing now is the continuation of the eternal confrontation between the East and the West, which, after a twenty-year lull, has once again made itself felt. The main prize in this game is not Ukraine, but the whole of Eurasia. The goal pursued by the United States is to achieve fragmentation of the Eurasian continent, to plunge it into the depths of internecine wars, so that none of the European or Asian countries will be able to challenge Washington at the global level.

A series of small armed conflicts along the borders of the "victim", actually proposed by Chuck Hagel, fits into this concept. Probably, the focus of tension will soon move from Ukraine to Transcaucasia, for example, to Nagorno-Karabakh, and then to Central Asia, where the United States will try to loosen Kyrgyzstan, Tajikistan and, most importantly, Kazakhstan — candidates for creating a single economic space with Russia.

What can Russia answer? The answer lies on the surface: NATO is a weak bloc and must be destroyed from the inside by the same methods that the States use to disintegrate the post-Soviet space. And vice versa: integration processes in the CIS need to be accelerated so that supranational military and economic structures are formed as early as possible. All technologies are universal, and Russia is able to beat the United States with their own weapons.

Ukraine in this sense is a double-edged sword. Firstly, it borders not only with Russia, but with the NATO states, which means that destabilization in this country comes around in the east and in the west. Secondly, the European ultra-right can take advantage of the experience of the Right Sector and other Ukrainian nationalist organizations in order to carry out a similar coup in their homeland, and then the arc of instability will not go along the Russian border to the Caspian and Amur, but directly to the English Channel and Gibraltar, and the epic of a united Europe will end there.

Third, Ukraine is not an asset, but a liability. To keep her afloat, you need a lot of money. Many countries like Germany and the Netherlands are very afraid that if the Ukrainian government is not financed, the civil war in this country will become rampant and Europe will have its own Afghanistan. But no one wants to take over the feeding of the Kiev junta: the European economy is too weak to pull out a state with a population of over 40 million people from the abyss.

Wouldn't it be better to leave the case without a handle called “Ukraine” to Russia? - reflect in the Western European capitals. And they do not do it only under strong pressure from the United States, which, to put it mildly, does not care about the fate of Ukraine. On the contrary, the emergence of Afghanistan between Russia and the European Union will be the best result of the Ukrainian crisis for Washington.

Finally, we must remember that in modern wars, not the one who has more aircraft carriers wins, but the one who has better thought out the strategy. You can lose the battle, but win the war. Ukraine is the case: on the one hand, an anti-Russian coup d'état took place in Kiev, on the other hand, Western appointees would clearly not be able to stay in power, and the West itself would eventually find itself in an impasse: to continue funding the cockroach’s separation or still give it to Russia for so that she put things in order here? And the arguments in favor of the latter are heard more often. Does a poor Ukraine need Russia is a completely different question, and the Kremlin is already deciding whether to accept such a generous “gift” from its western partners. What if we do not want?

Ctrl Enter
Noticed oshЫbku Highlight text and press. Ctrl + Enter
We are
Situational analysis of the death of the MH17 flight (Malaysian Boeing 777), made on the basis of engineering analysis from 15.08.2014Results of the week. "Who you are lucky, in fact, and will carry a cock, and such a bird as you, I, too, will rush!"
Military Reviewin Yandex News
Military Reviewin Google News
47 comments
Information
Dear reader, to leave comments on the publication, you must sign in.