16 May 2014
1
The Second World War clearly showed the importance of a new class of weapons - hand-held anti-tank grenade launchers. Despite the relatively low efficiency, Panzerfausty and Bazuki noticeably increased the combat capability of the infantry units. Therefore, immediately after the end of the war, the development of such anti-tank systems continued. In addition, the creation of grenade launchers began to engage in new countries that had not previously worked on such projects. In the late forties, Yugoslavia entered the "club" of the creators of hand-held anti-tank grenade launchers.


Shortly after the end of the war, the Yugoslav leadership created the “Military Industry and Shipbuilding Plan for the 1947-1951 Years”. In accordance with this document, it was planned to lead the development of various branches of the defense industry. In addition, it stipulated plans for the creation of various weapon systems and military equipment. Among other things, the document included an item on the creation of a hand-held anti-tank grenade launcher. Trials of this weapons it was required to start no later than 1947-48, and mass production and supplies to the troops were to start in 49. The creation of the first Yugoslav grenade launcher was entrusted to the Institute №11, the Armaments Department of the Military Technical Institute (VTI) and the plant “Redva ​​Zastada” (Kragujevac). 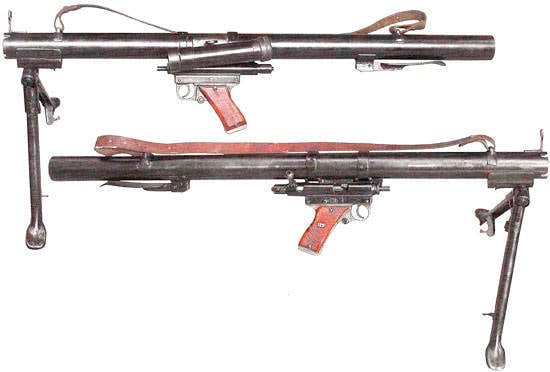 For obvious reasons, the Yugoslav engineers had no experience in creating hand-held anti-tank grenade launchers. Therefore, it soon became clear that the composition of enterprises engaged in the project, determined by the country's leadership, would not allow the task to be completed on time. In connection with this project, the Military-Technical Plant in the city of Valevo was appointed the project headquarters. This plant was engaged in the production of grenades, mines and fuses, which was the main reason for choosing. Anton Meshichek, who headed the design bureau of the plant, became the head of the new project. Since 1946 years under his leadership, engineers studied foreign anti-tank rocket launchers, especially German.

The first Yugoslav anti-tank grenade launcher, like some foreign developments, was proposed to be used with an original above-caliber grenade. This made it possible to provide acceptable combat characteristics in combination with the small dimensions of the weapon itself. The development of a grenade with the code designation “Srno” ended in the autumn of 1948. The creation of ammunition led engineer Buklysh.

The grenade with a total length of 552,5 mm had a characteristic large head of the caliber 76,2 mm, in which a shaped charge was located. A wooden core with a diameter of 43,7 mm was used as the tail of the grenade. It was proposed to place a number of grenade elements in the cavities of the rod. The rod itself was to be placed in the barrel of a grenade launcher. A propelling charge was attached to its rear. On the tail rod it was proposed to place four metal plates-stabilizers, which were straightened after leaving the barrel. For use with a grenade "Srno" proposed new fuse K-301. 1949 tests of the year showed that the grenade of the new model is capable of penetrating up to 100 mm of homogeneous armor.

The principle of operation of the fuse K-301

The fuse K-301 had a metal body in the shape of a truncated cone. In its upper cavity there was a wooden cork, which should have been in contact with the target when hit. When hitting the target, the cork had to be sunk into the fuse body and set in motion the drummer hitting the primer. To keep the impactor in a neutral position and to ensure safe use, the K-301 fuse had a protection system made from a spring-loaded sleeve and two metal balls. In the traveling position, the balls blocked the movement of the bush and the drummer. When they hit the target, they had to leave their seats and “release” the corresponding details.

The propellant charge of the grenade was a cardboard tube divided by several partitions. Inside the “compartments” of the tube there was a charge of gunpowder (420 g) and some sand. The latter, remaining inside the weapon for some time, was supposed to increase the pressure of the powder gases in the barrel.

The design of the Mesichek grenade launcher is of great interest, since it used the original trigger mechanism (USM). The barrel of the grenade launcher was a seamless tube caliber 44 mm long 970 mm. In front of the trunk was attached folding bipod. Close to the rear of the weapon there was a folding shoulder rest. In the middle part of the barrel fastened trigger mechanism, the design of which used components borrowed from small arms. The grenade launcher received an optical and auxiliary open sight. The total weight of the structure was 6,2 kg. 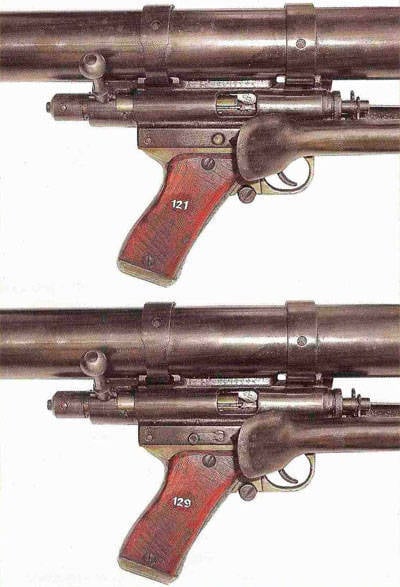 Directly under the barrel were a receiver with a sliding gate, trigger and a magazine borrowed from one of the small-caliber rifles. Under these units were located pistol grip and trigger with a protective bracket. The grenade launcher trigger was equipped with a detachable box magazine for idle annular ignition cartridges of caliber 5,6 mm.

Similar original design USM affected the process of the shot. Preparing a grenade launcher for firing, the soldier had to place a grenade into the barrel, as well as firing the trigger, sending the blank cartridge into the chamber. Hovering a grenade launcher at the target, the shooter pulled the trigger, after which the idle cartridge ignited. Through the seed hole that connected the chamber of the USM grenade launcher with the barrel, the fire came to the throwing charge of the grenade placed in the cardboard case. After the burning of the cardboard, the propellant ignited and a shot occurred.

Despite the seeming complexity, this design of the trigger allowed the Yugoslav engineers to ensure the performance of the required characteristics, as well as to simplify and cheapen the production of weapons through the use of existing components. The recoilless grenade launcher of the Mesichek system fired the Srno cumulative grenade at a speed of 87 m / s. Target range was equal to 200 meters. A trained rocket launcher could make up to three rounds per minute.

In 1948, the team of the design bureau of the Military Technical Plant in Valevo presented its development to the commission of the General Staff of the Yugoslav People’s Army (JNA). Interestingly, for the first time, new grenade launchers were shown to the public already on 1 in May 1948, i.e. before adopting. Especially for the parade was made several layouts of new weapons.

On tests, the Meshichek grenade launcher had to contend with a competing project, which involved the use of a relatively complex rocket grenade. To carry out the shot, this weapon had to use primer-igniters placed in a special shop. The Commission of the General Staff compared both grenade launchers and rendered its verdict: in 1949, the Mechnichek grenade launcher was adopted by the JNA. The weapon received an army designation RRB М49. Serial production of grenade launchers was soon launched at the plant “Redvents outpost” in Kragujevac. The release of ammunition was assigned to the Krusik factory in the city of Valevo. 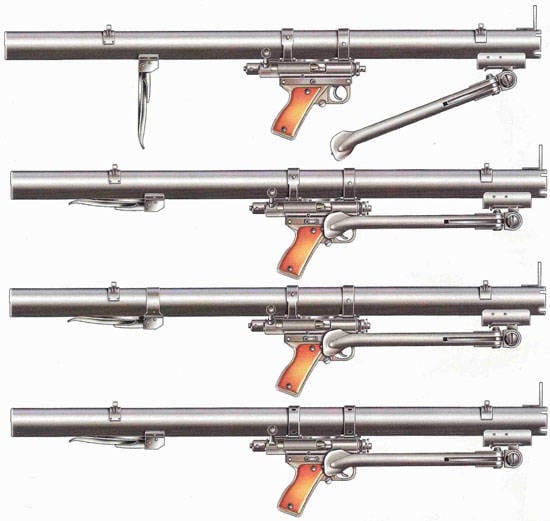 Until the end of 1949, the industry manufactured more than 230 grenade launchers of the new model. The first months of operation of the M49 grenade launcher revealed its shortcomings. Soon the designers of the Valevsky Military Technical Plant presented an updated version of the project. Antabas for a belt appeared on the trunk, the mounting system of the open sight and the shoulder rest changed (they suggested using welding instead of fastening rings), and the handle was also modified. In addition, the optical scope of the sight has changed: the new version allowed the grenade launcher to quickly determine the necessary amendments. For some time there were big problems with the production of flexible stabilizers. These parts had to be ordered to the EMO plant (Celje), which made the production process difficult.

In 1950, the new M50 grenade was adopted. It differed from the Srno product with a silumin tail bar and a new K-302 fuse. The previous K-301 fuse could not provide a grenade exploding when meeting with a target from a large angle. K-302 was deprived of this flaw.