13 May 2014
62
At the end of March, International Truck Alliance Rus (“Intrall”) and the Internet portal Cardesign.ru announced the launch of the “Combat Transport Vehicle of the 21st Century” competition. The participants were required to develop and present the appearance of a promising armored car that could be used in the army in the near future (early twenties). Reception of works was completed in late April, and in early May, the jury summed up the results of the competition. From 6 to 11 in May, an exhibition of entries was held at the All-Russian Museum of Decorative, Applied and Folk Art (Moscow). In addition to the sketches and drawings presented by the contestants, several prototypes of promising armored cars developed by Intrall were shown at the exhibition.


At the exhibition were presented for the first time the armored vehicles “Toros” and “Kolun”, created by the specialists of the Intrall company and the AMUR automobile plant (Novouralsk). According to available data, the shown prototypes of promising armored cars are built with extensive use of components and assemblies of existing equipment. The main "donors" of the components were civilian cars of domestic development. It is likely that such an approach to the creation of armored vehicles in the future will be able to simplify and cheapen their serial construction (of course, if the armored vehicles "Toros" and "Cleaver" find their customers). 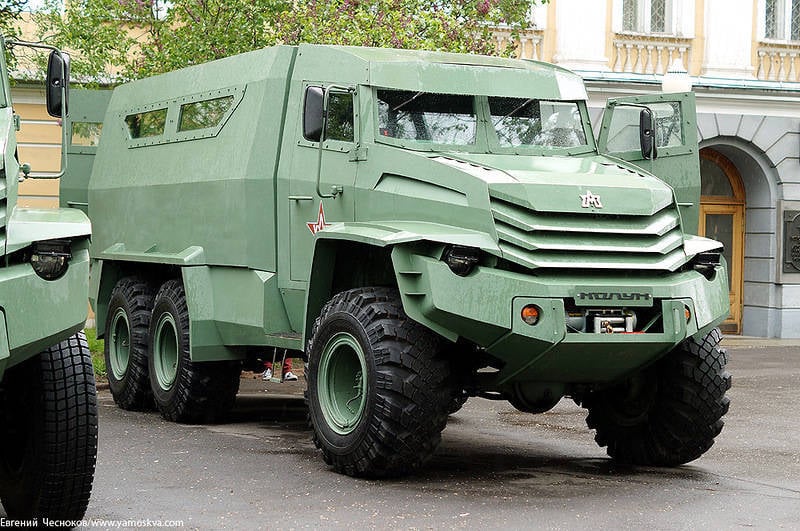 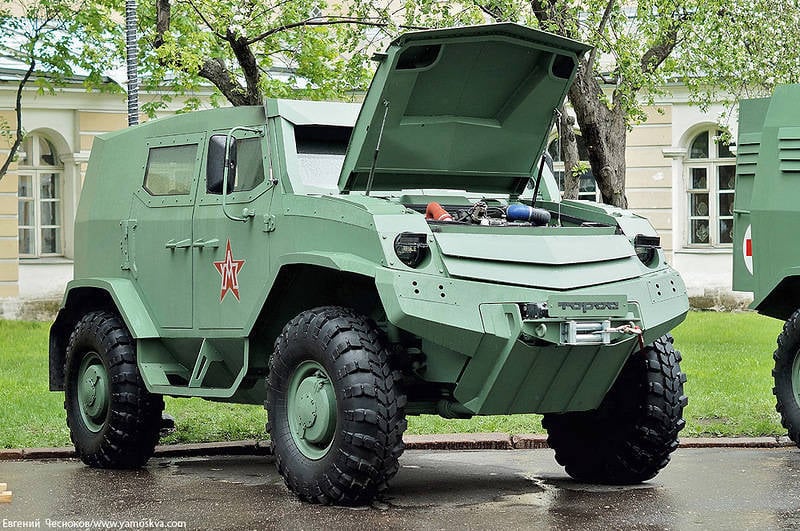 Since the first demonstration of new armored cars took place as part of the exhibition of works submitted to the designers' competition, it is impossible not to note their interesting appearance. The project authors had to seriously work on the design of armored hulls. According to reports, they proceeded from the requirement of simplifying the design while maintaining its high characteristics. This is due to the characteristic forms of buildings, formed by conjugated rectilinear armored panels. It should be noted that the armored vehicles "Toros" and "Cleaver" got an interesting and recognizable appearance. As for the real characteristics of such cases, it is too early to talk about them.

Armored car "Toros" is designed to transport fighters with weapons and necessary goods. The design of the machine involves the use of several body options, depending on the wishes of the customer. In addition to the basic option for the transport of soldiers, the customer can get an ambulance or armored car with a cargo platform in the rear of the case. It is possible to build a cargo-passenger version with a shortened cab and a reduced space for cargo. Of the entire spectrum of possible modifications, only three were presented at the recent exhibition: basic, commanding and sanitary. 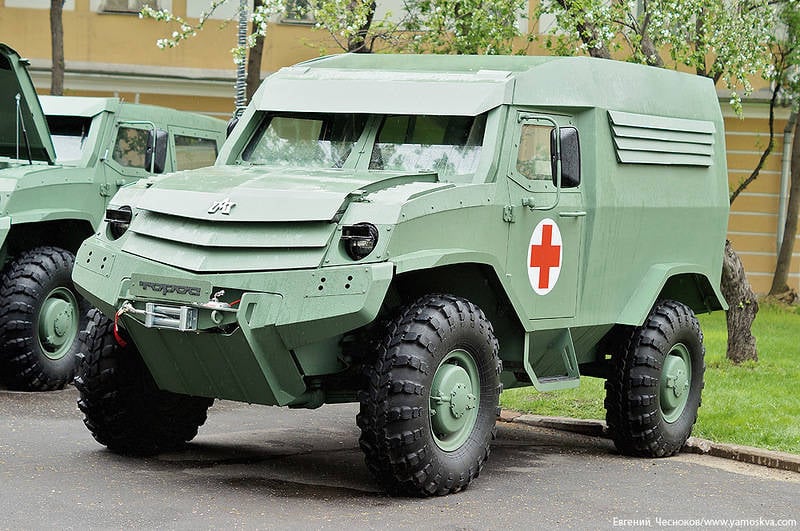 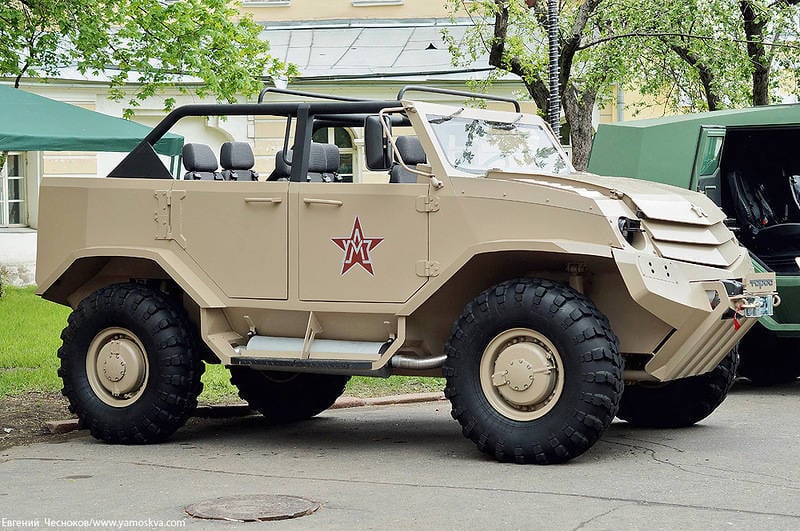 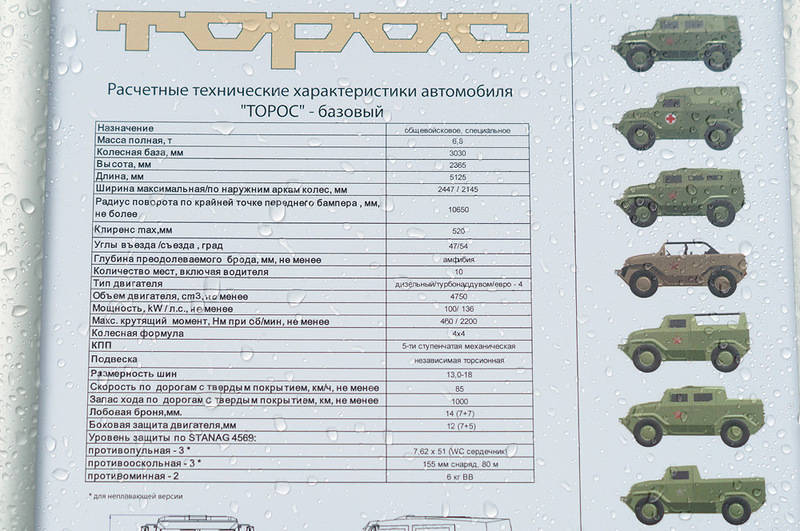 The total mass of the basic modification of the four-wheeled armored car "Toros" can reach 6,8 tons. With such a weight, the car has a length of more than 5,1 meters, a width of about 2,5 m and a height of 2,36 m. The armored car is equipped with a diesel engine with a turbocharging power 136 hp meeting the requirements of the Euro-4 standard. The engine is mated to a five-speed manual gearbox. The wheels of the armored car have an independent torsion bar suspension. One of the authors of the project, designer A. Kuzmin, told the ITAR-TASS news agency that the chassis of the vehicle uses certain units borrowed from domestic armored personnel carriers to ensure high performance.

Using such units, the armored car can reach speeds up to 85 km / h on a highway. The estimated range in such conditions reaches 1000 km. The machine is able to overcome water obstacles by swimming. The movement is carried out due to the rotation of the wheels.

Perspective armored car "Toros" can be protected in accordance with the 3 level of the standard STANAG 4569. This means that frontal armor with a thickness of 14 mm and onboard thickness up to 12 mm provide protection for the crew and units from the armor-piercing bullets of the cartridge 7,62 x51 mm. In addition, the armor is capable of holding fragments of an 155-mm artillery projectile in an explosion at a distance of 80 meters. Mine protection of the machine is carried out according to the NATO standard 2 level, and is able to withstand the undermining of 6 kg of TNT under the wheel. It is noted that at the maximum level of protection the armored car loses its ability to swim. 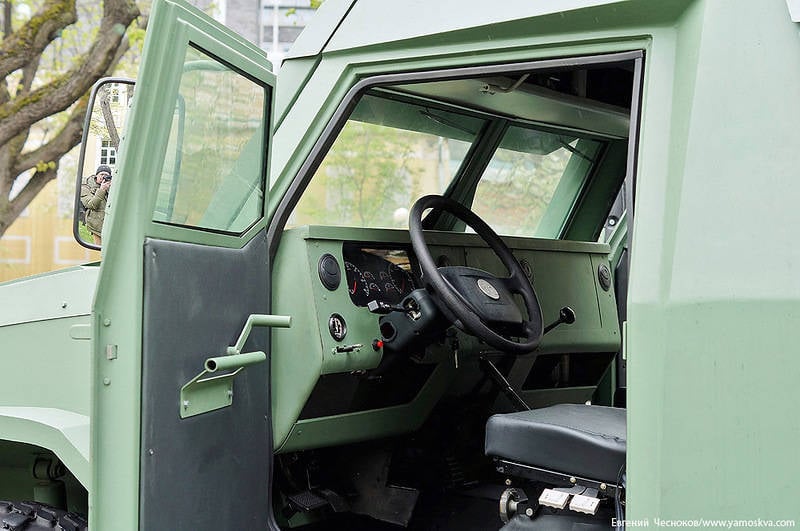 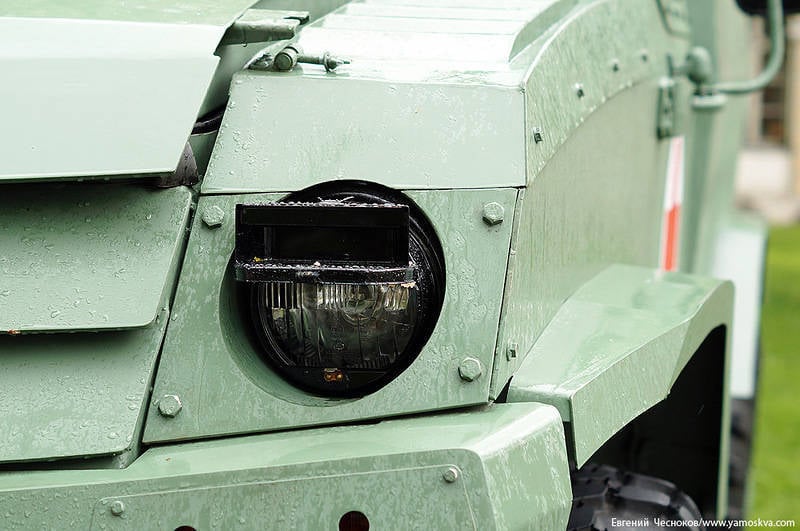 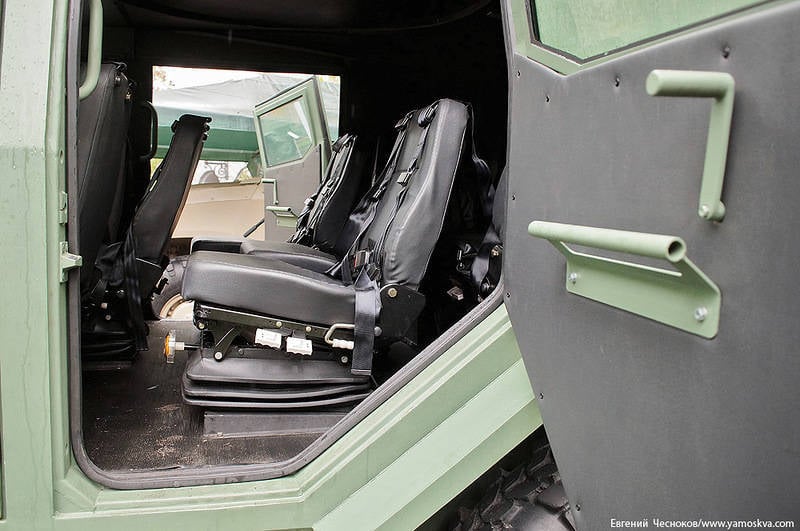 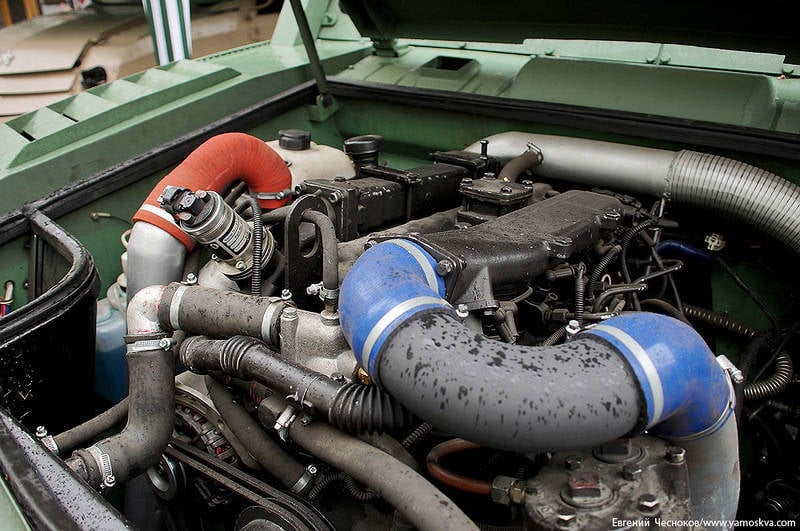 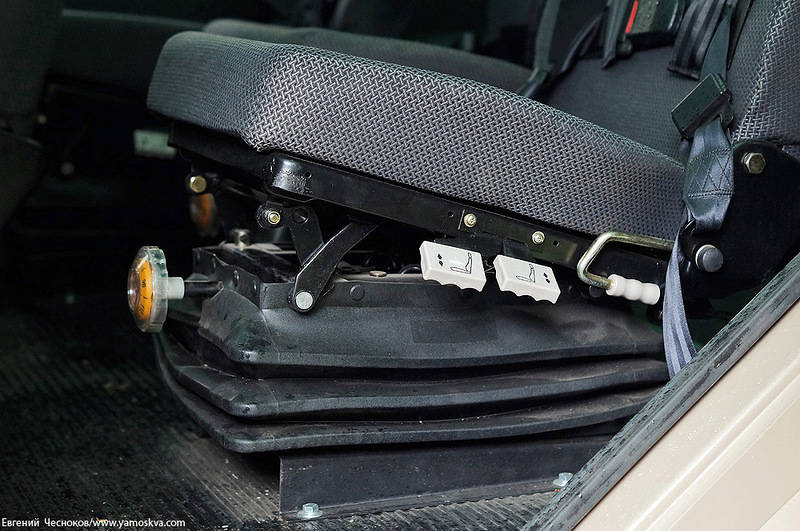 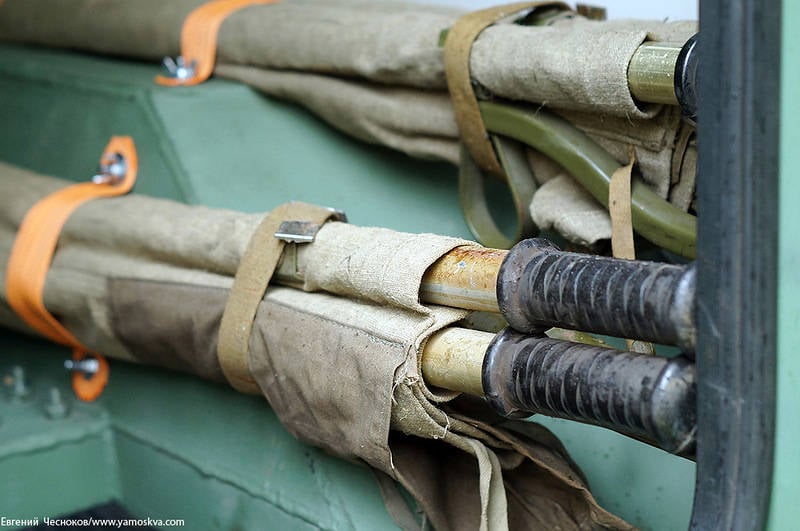 Armored car "Toros" has a fairly dense layout of the passenger cabin. In the basic version, designed to transport fighters with weaponsIt has ten seats. Two rows of three seats are located in the front and middle parts of the cab (including the driver's seat), four more seats are available in the rear. Thus, a new armored car can carry a squad of nine soldiers, not counting the driver. For boarding and disembarking on each side of the machine there are two doors that open in different directions. For access to the four rear seats, a door is provided in the hull aft sheet.

The “Cleaver” armored car has large dimensions in comparison with the “Toros” and the corresponding characteristics. Like the second armored car company Intrall, "Cleaver" is designed to perform transport functions. From the available information, it follows that on the basis of this armored vehicle a vehicle for transporting personnel or an armored heavy-duty truck can be created. According to the calculations of the authors of the project, with its own curb weight up to 9 tons, "Cleaver" will be able to transport up to 4 tons of cargo. One of the most interesting features of the project was shown at a recent exhibition: one of the prototypes had a six-wheeled chassis, the other - four-wheeled. 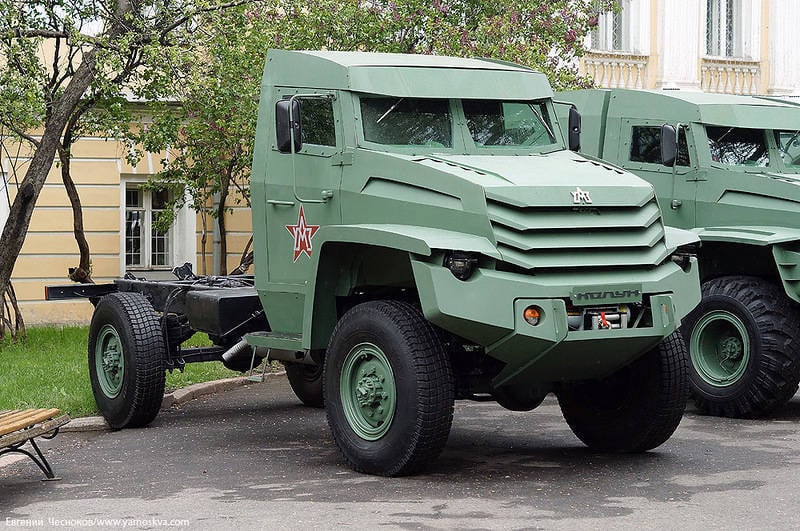 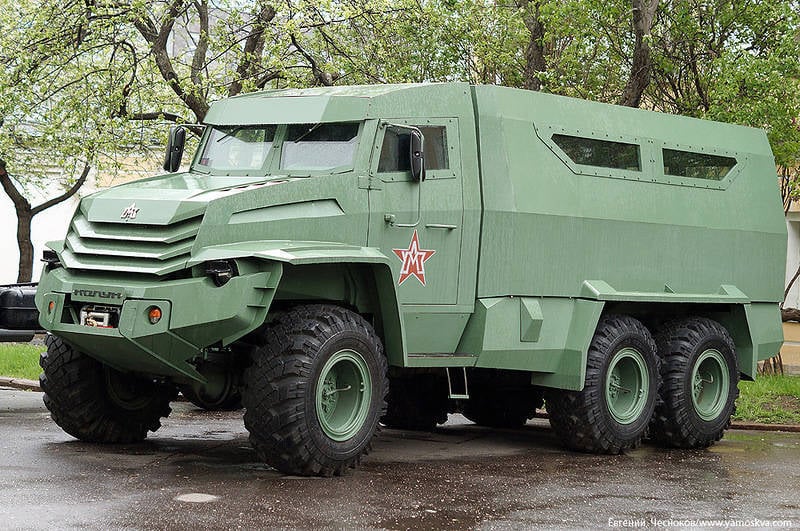 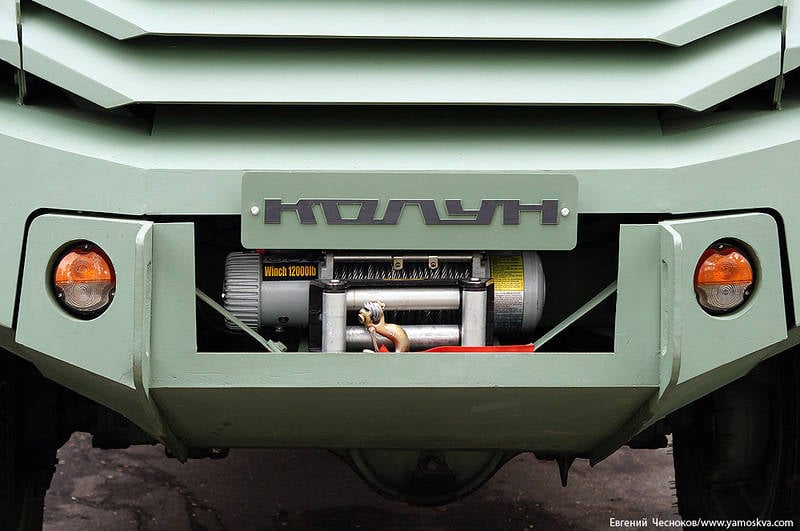 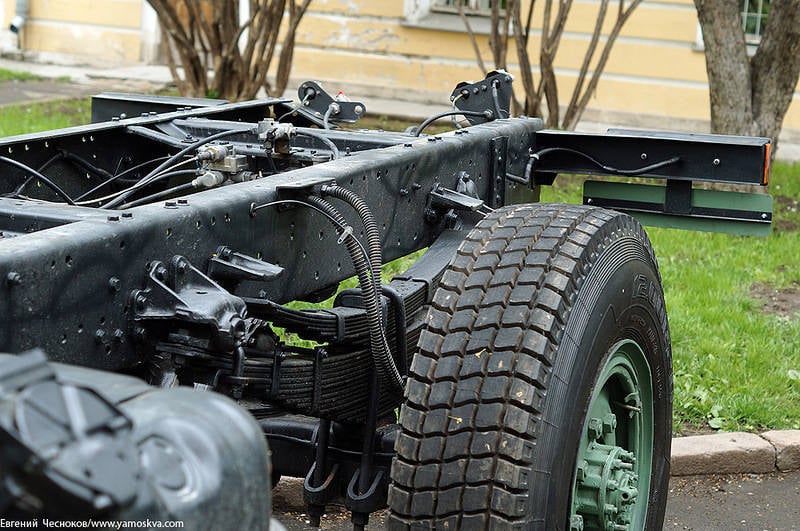 The AMUR plant has been building ZIL-131 trucks for several years, and the production of chassis for special equipment based on this machine continues to this day. It was this chassis that was chosen as the basis for the “Cleaver” armored car. After some modifications, the base chassis can be used for the construction of armored vehicles.

It is proposed to equip both "Cleaver" armored cars with a turbocharged diesel engine and an intercooler complying with the Euro-4 standard. Engine power - 136 HP The engine is connected to a five-speed manual gearbox. The chassis of the armored car, which is a further development of the units of the truck ZIL-131, is equipped with a dependent suspension based on longitudinal leaf springs with telescopic shock absorbers. Leading are the rear (rear) axles. If necessary, you can connect the front axle.

Since the armored vehicles "Toros" and "Cleaver" were developed in parallel, it is proposed to equip them with identical armor protection. The declared level of protection of the "Cleaver" armored truck corresponds to the level of protection of the "Toros". The machine can be protected from 7,62-mm armor-piercing rifle bullets and fragments of 155-mm projectiles at a distance of 80 m. In addition, mine protection from ammunition with a charge of up to 6 kg of TNT is declared.

As follows from the presented materials, the “Cleaver” armored car can be equipped with one of two types of armored hull. The first of them is proposed to be carried out in the form of two separate blocks: in one, the engine and the driver's cabin are placed, in the second - the landing force or cargo. The second option involves the use of a single armored hull. Regardless of the architecture of the hull, the “Cleaver” armored car is capable of transporting armed people to 16. Two seats are located next to the driver, the rest - in the amphibious troop compartment. For landing in the car, there are two doors in the sides of the driver's cabin and a large door in the rear of the hull.

The exhibition at the All-Russian Museum of Decorative, Applied and Folk Art showed five prototype machines: three versions of the Toros (basic, commanding and sanitary) and two versions of the Colun (six-wheeled with a troop compartment and four-wheeled without). All five machines are simplified prototypes. They use the components of the power plant and chassis, which are planned to be installed on serial equipment. At the same time, the machines are equipped with non-armored steel cases. Five machines are designed to test some technical solutions, as well as to demonstrate the project to potential buyers.

According to media reports, the work on the projects of armored vehicles "Toros" and "Cleaver" started about a year ago. During this time, Intrall employees developed a technical project, and AMUR plant built several prototype machines. Already conducted the first tests at the site in Nizhny Tagil. It is alleged that some foreign customers are interested in the projects. Who exactly - has not yet been reported. It is noted that the Russian armed forces are considered the main customers. The Russian Ministry of Defense, in turn, has not yet responded to new projects.