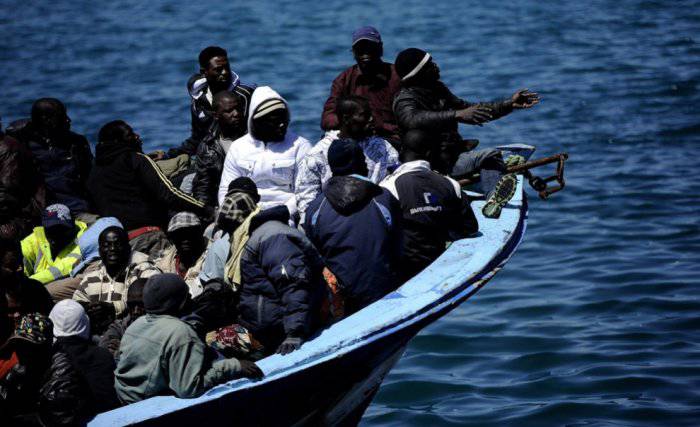 The European Union is on the verge of collapse one of the main ideas of the union - the lack of borders. NATO military intervention in the revolutionary events in Libya led to a massive flow of refugees who leave North African states and are being shipped to Europe. Getting to the nearest Italian islands, refugees eventually spread throughout the continent, putting at risk the peaceful existence of Europeans.

However, as long as diplomats continue to argue about the introduction of customs control between EU member states, some are already in operation. For example, Denmark has already announced the restoration of previously revoked customs controls at borders with neighboring states. Germany did not appreciate such a decisive action of a neighbor and demanded an explanation of the reasons for the introduction of control. Guido Westerwelle, the German foreign minister, said: “We need from Copenhagen an early and detailed explanation of the actions taken. Freedom of movement and the Schengen Treaty are fundamental achievements in building a united Europe and should not in any way be called into question. ”

Perhaps the Danish government is doing quite right, and the time has indeed come when the real threat came for the prosperous existence of the Europeans. Sailing ships with thousands of refugees fleeing civil wars float and sail through the Mediterranean from the countries of North Africa every day. There are so many of them that accurate records cannot be kept. The shortest path runs through Tunisia. The coast of this state and the island of Lampedusa, belonging to Italy, divides the entire 113 kilometers.

Only according to preliminary data, the number of refugees who moved to Italy and Malta from neighboring Libya, has reached more than 12 thousands of people. And many understand that this is only the beginning. In recent months, more than 700 thousands have left the territory of Libya, covered by revolutionary unrest.

Many fail to swim to coveted Europe. So, in particular, on the night of May 7, off the coast of the island of Lampedusa, stumbled upon rocks, got holes, and sank a small vessel with Libyan refugees. In total, 528 forced immigrants from Libya and other North African states, including women and children, were on board. At least 120 people, including two children, died as a result of the disaster. This is not the first such disaster. 6 April, the same ship with migrants went to the bottom, with the result that more than 150 people are considered dead. 53 refugees managed to avoid death. At least three more vessels with refugees from Libya have not reached the shores of Italy in recent days and have disappeared where it is unknown.

Melissa Fleming, a spokeswoman for the UN Office for Immigrants and Refugees, called on the coast services of EU states, sailors, captains of private, commercial ships to adhere to their obligations and help people who are in a difficult situation to "take into account that all courts departing from the coast of Libya in the direction of Europe, obviously, will need help. " Pope Benedict XVI also appealed to humanity and philanthropy in his Easter address. “It is necessary that all people of goodwill open their hearts to greet them, so that the urgent needs of a large number of brothers and sisters meet a kind response united in their indivisible unity,” said Pope Benedict XVI.

Of course, in words, tolerant Europeans are really ready to help migrants. In fact, it seems, they are ready by any means to push those who still overcome it back into the depths of the sea. On such thoughts pushes scandal, which literally recently flared up in the West.

Priest Moses Zerai, head of the Rome-based human rights organization Habeshia, accused NATO of refusing to provide assistance to a group of African refugees whose ship had lost speed in the Mediterranean. About the essence of the incident first wrote the British newspaper The Times. According to her, on a ship departing from Libya on March 25, there was a 72 man. Among them are Sudanese, Ethiopians, Eritreans, citizens of Ghana, Nigerians. Twenty women and two very young children were among the immigrants. In the middle of the journey on the ship ran out of fuel. Passengers turned for help to the Italian coast guard. Surviving Africans say that drinking water and biscuits were delivered by helicopter. As the migrants tell, the helicopter pilot informed them that the rescue ship was on the way. However, the rescue ship never came. In addition, requests for help were ignored by several NATO warships, past which the emergency ship was drifting.

According to the print edition of The Guardian, in the area in which the ship with immigrants was located, the aircraft carrier Charles de Gaulle of the French Navy was passing. The newspaper indicates that two helicopters that flew reconnaissance aircraft with refugees flew from its side, after which the aircraft carrier continued its course.

NATO on this issue justifies itself and claims that “Charles de Gaulle” did not go to sea at all that day. In Brussels, they continue to insist that another aircraft carrier, the Garibaldi of the Italian Navy, made the transition nearby that day. But he was also at least 100 nautical miles from the scene of the tragedy. However, even if we take into account that not French, but Italian helicopters were flying over helpless people, but help was not provided anyway - what does this change?

It is stated that the ship with migrants, which was heading to the Italian island of Lampedusa, was in the open sea 17 days. Only 10 of April by its sea current nailed to the Libyan city of Zlitan. By that time, 11 people were still alive on the ship, two of whom had already died on land. “Every morning when we woke up and found on the deck a few lifeless bodies of the same kind as we were of refugees who were thrown into the sea. We either prayed or died, ”one of the nine survivors told journalists Abu Kurke.

Meanwhile, in the Italian Coast Guard, the Guardian reported that they knew about the plight and catastrophic situation in which the ship with the refugees found itself. According to the official service representatives, it was in the regional area of ​​responsibility of their colleagues in Malta, to whom the Italians sent all the necessary information. In the Malta Coast Guard, this information is denied. Currently, the newspaper writes, people who survived the disaster are hiding in the private house of one of the residents of the Libyan capital Tripoli, and in the near future they plan to make a new attempt to get to Lampedusa.
Ctrl Enter
Noticed oshЫbku Highlight text and press. Ctrl + Enter
Military Reviewin Yandex News
Military Reviewin Yandex Zen
3 comments
Ad