13 May 2014
42
May 13 - Black Sea Day fleet Of Russia. It was on May 13, 231 years ago (in 1783) that 11 ships of the Azov Flotilla under the command of Fedot Alekseevich Klokachev, an outstanding naval commander who was destined to take a direct part in the creation of the Russian Black Sea Fleet, arrived in Akhtiar Bay (the old name of the Sevastopol Bay) become his first commander (chief commander).

For all of Europe, there is no such harbor like - position, size, depth. It is possible to have a fleet of up to one hundred ships of the line. 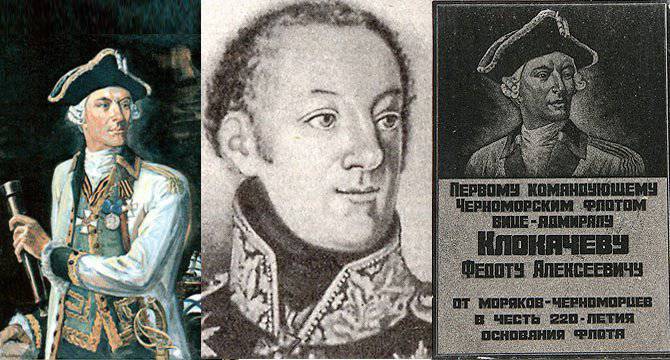 Over time, the 11 ships of the Dnieper Flotilla joined the ships of 17, which entered the Akhtiar Bay. The ships of the two flotillas served as a kind of foundation for the formation of the future Black Sea Fleet.

The Black Sea Fleet of the Russian Empire began to be created after the relevant decree of Catherine II, which came into being after the decree on the annexation of Crimea to Russia.

A year after the Russian warships arrived at Akhtiar Bay, it was decided to rename Akhtiar to Sevastopol (translated into Russian, a majestic city).

From that very moment, the active development of the fleet grouping began, which, after 2 of the year, since Vice-Admiral Klokachev's vessels were being developed by the ships, they already had more than 50 vessels of various purposes, from schooners to battleships and frigates. The total number of sailors by 1785 in Sevastopol was more than 13 thousand people. The headquarters of the Black Sea Fleet of Russia was originally based in Kherson.

The decision that May 13 should be considered the day of the Russian Black Sea Fleet was made in the 1996 year. Despite the appearance of a bright date in the naval calendar, 1996 year in the memory of many sailors remained with a touch of heavy memories. After all, 18 years ago the first stage of the division of the single fleet into its component parts, Ukrainian and Russian, was begun. In May, 1997 was concluded an agreement on the final delimitation of the fleet government segments in the Crimea.

Fleet-based points and rear services in Balaklava, Ochakov, Izmail, Odessa, and Donuzlav were transferred to the Ukrainian side; In addition, 9 main and alternate airfields from 13, as well as 4, departed the coastal forces, combat and technical support facilities in Dalny, Old Crimea, Bakhchisarai, Novo-Andreyevka and other settlements of the peninsula departed to Kiev.

Limited to numerous obligations to Kiev (including obviously artificial ones), the Russian side could not fully develop the Black Sea Fleet after the collapse of the Soviet Union. And if in 90, everything was written off mainly on lack of money, then after the so-called “orange” came to power in Ukraine, the modernization barriers of the Russian Black Sea Fleet began to arise regardless of the financial component of the issue. In 2005, then-President of Ukraine Viktor Yushchenko stated that the status of the Russian Black Sea Fleet on the Crimean Peninsula needs to be reconsidered. Oleksandr Turchynov, who at that time worked in the Security Service of Ukraine, announced that the basing of the Russian fleet in Crimea is a contradiction to the national interests of Ukraine.

The policy and the desire of the then Ukrainian leadership to lead the country towards NATO clearly interfered in the matter. It should be noted that today's Ukrainian pseudo-authorities obviously prepared a bridgehead in the Crimea for the arrival of “friends” from the North Atlantic Alliance. Information that has become public about the tender for the repair of one of the Sevastopol schools for the money of the US Navy to deploy American marines in Sevastopol is a vivid example.

However, 18 years after the first stages of the division of the Black Sea Fleet historical justice triumphed: Crimea again became part of Russia, and the Russian Black Sea Fleet received a completely new impetus for its further development. That is why May 13, 2014 is a special day for Sevastopol, Crimea, and all of Russia. In fact, before our very eyes, there is a revival of the Black Sea Fleet - the heroic fleet, which at different times stood guard over the borders of the Fatherland.

The history of the fleet is inextricably linked with such names as Fedor Ushakov, Mikhail Lazarev, Pavel Nakhimov, Vladimir Kornilov. Today, the Black Sea Fleet is commanded by Alexander Vitko, who just the other day (5 May 2014 years) by the decree of the President of the Russian Federation was awarded the rank of admiral. 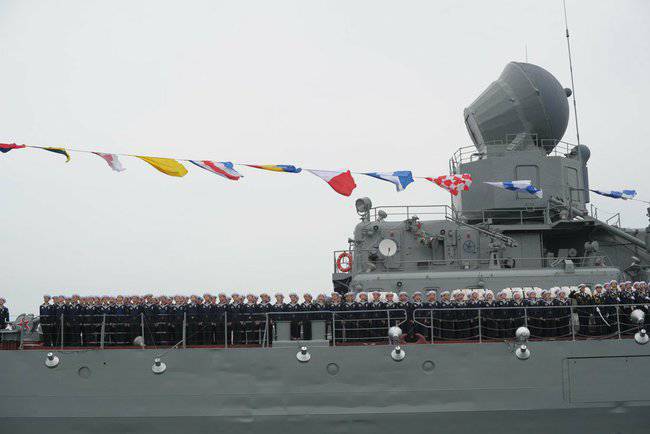 Ctrl Enter
Noticed oshЫbku Highlight text and press. Ctrl + Enter
We are
May 13 - Day of the Black Sea Fleet of Russia
Military Reviewin Yandex News
Military Reviewin Google News
42 comments
Information
Dear reader, to leave comments on the publication, you must sign in.