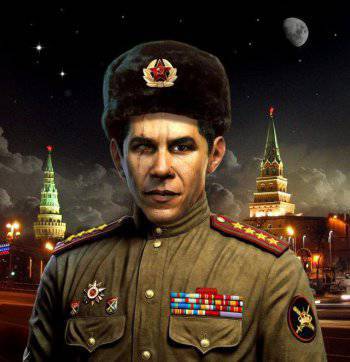 On the portal "Edge Trader Plus" An article appeared in which the topic of the disastrous policy of the West, supported by the mainstream media propaganda machine, is raised. The author advises the people on whom this propaganda acts, not to pin hopes on their government, but to rely on themselves. It's time to stop consuming the lies coming from the police state!


According to the author, who chose not to call himself, readers who want to discover the truth should draw information from objective sources. Do not hope that the local people news resources (meaning American), based on the apparatus of the police state, the army and the NSA, spying on an obedient population, will give truthful reports. The author is sure that from the Obama administration you can only hear lies, and the media working for Washington are just “delivery vehicles”.

What do you think about Putin, about Russia? To ask this question recommends a philistine to the inhabitants.

After thinking about Putin and Russia, think about the fact that never in the world stories The main western bankers did nothing except issuing "useless paper currency," which relied on nothing and was controlled by bureaucrats whom no one chose.

Such is the world, and most of us live in it, without objection.

Meanwhile, those who exist outside the influence of Western banks refuse to remain victims of inflationary degradation of the West.

Who is to blame for the Ukrainian crisis? - the author asks. That's right, the United States is led by “teleprompter” Barack Obama, the corporate president.

This “teleprompter” threatened Russia with economic sanctions, which allowed neo-Nazi thugs in Ukraine to continue unrest. According to the author, these thugs stole or exported all Ukrainian gold, as well as billions of dollars, which they then put in Swiss banks.

And Putin, meanwhile, did not undertake any "aggression." He waits patiently. The events recorded in this play are doomed to failure.

Putin is watching Obama spin a political rope on which he will hang himself, and at the same time he is negotiating with other countries (for example, with China about a deal on the supply of natural gas).

Here the author writes about gold, rubles and yuan.

Will Russians trade with China for dollars? The author does not allow such a thought.

Ruble, yuan, maybe some gold, he writes. And in the absence of a dollar in the calculations. As a result, this very dollar will disappear as a world reserve currency.

While Putin, who has rejected the expansion of Western central banks, continues to strengthen the ruble and does business with countries like Russia, with countries rich in natural resources, Obama is invading similar countries. As long as Obama seeks war with Syria and Ukraine, Putin is busy making deals with Latin American countries. Obama allows the Fed and Wall Street to lower the gold market, Putin is creating gold reserves of Russia.

Did Obama do something to strengthen the US financial? Nothing! On the contrary, he increased government spending. Under Obama, the plight of millions and millions of Americans worsened.

Most Americans, the journalist points out, have never even heard of the Russian Gazprom, next to which Exxon is a pitiful dwarf.

Russia ranks second in gold reserves in the world. And the United States - the largest debtor in the world. The USA likes to be number one, the author gloomily sneers.

And if we also recall the BRICS countries, it will become clear: the United States does not only deal with Russia.

In fact, the United States and the Western banking system makes hara-kiri.

Germany seems to be an ally of the United States. But what will she do when it comes to breaking her important financial ties with Russia?

Well, and Israel? Of course, he is a loyal ally of the United States. But the worsening situation in Ukraine is a threat to the security of Israel. Israel has its own Tamar floating gas production platform and has made a deal with Gazprom to export liquefied natural gas.

The government-controlled media is needed by Washington in order for the political elites to continue to fool the people. Trust in any government, the author believes, is a trap from which there is no salvation.

Add to this that the well-known publicist Paul Craig Roberts has long called the American mainstream media "press-houses". As for the coming catastrophe of the American dollar, it seems that the White House administration is making every effort to it - just as it does everything possible so that a noticeable piece of Ukraine will go to Russia. So tell me after this that Barak Huseynovich is not an agent personally recruited by Putin!

Observed and translated by Oleg Chuvakin
- especially for topwar.ru
Ctrl Enter
Noticed oshЫbku Highlight text and press. Ctrl + Enter
We are
Results of the week. “Excuse me, aren't you crazy?” - “No. I have a certificate "Geopolitical mosaic: the CIA agent tweaked the Chernobyl accident, and Obama complained that he was not loved because of his skin color.
Military Reviewin Yandex News
Military Reviewin Google News
67 comments
Information
Dear reader, to leave comments on the publication, you must sign in.