Referendums in the Southeast: the majority - for independence! 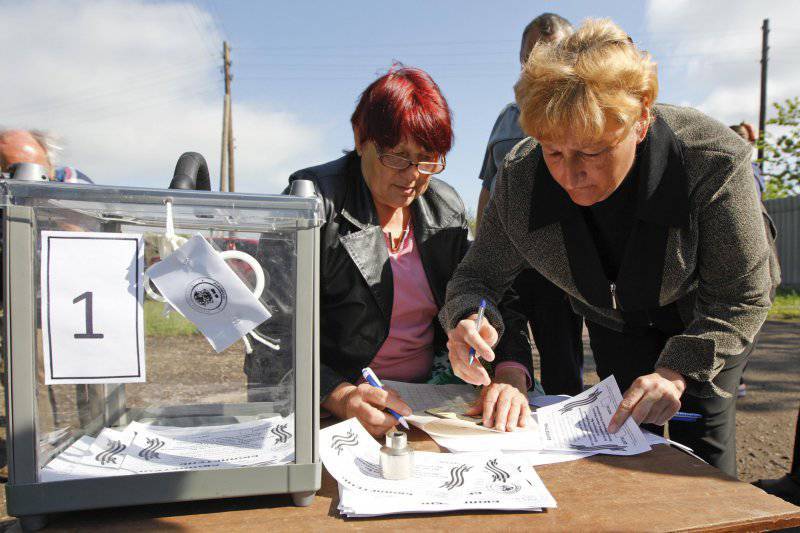 As passed "Vesti", on the night of the day, the chairman of the Central Election Commission of the Donetsk People's Republic, Roman Lyagin, said that at the last referendum 89,07% of voters had voted for the state independence of the Donetsk region. “Against” voted 10,19 %% another 0,74% of the ballots was spoiled. As for the turnout, then, according to the co-chairman of the DPR government Denis Pushilin, the final turnout in the referendum was 74,87%.

This data is likely to be updated.

Armed formations of the Kiev junta tried to prevent people's will. The head of the CEC of the Luhansk People's Republic, Alexander Malykhin, said that the Ukrainian security forces did not allow the delivery of bulletins to the Belovodsky, Markovsky, Svatovsky, Melovsky and Troitsky districts of the Lugansk region. Because of this, there was no opportunity to hold a referendum. As noted "Vesti", the Ukrainian security forces tried to interfere with the referendum in the Krasny Liman of the Donetsk region, but, having met resistance from representatives of the self-defense forces of the Donetsk People's Republic, they retreated. It is also noted that in Krasnoarmeysk representatives of the National Guard killed a civilian, seized the buildings of four schools where polling stations were located. However, here the attempts to disrupt the voting failed: the electoral committee staff were able to remove ballot boxes, subscription lists, voter lists and the seal.

In order to avoid falsifications, they write “Vesti”, members of district commissions at polling stations checked passports of voters and checked them with lists. Police officers assisted in ensuring the security of the plebiscite.

According to the People’s Governor of Donbass, Pavel Gubarev, the result of the referendums in the Donetsk and Lugansk regions will be the creation of the Donetsk People’s Republic. And this new subjectivity is “the first step of our subject large Novorossia, the former southeastern Ukraine”. Coordinator of the Central Election Commission of the Donetsk People's Republic, co-chairman of the DPR Presidium Boris Litvinov clarified that the organizers of the referendum are planning to hold a congress of deputies of all levels of the Donetsk region and begin a “civilized divorce” with the Kiev authorities.

Meanwhile, the Kiev authorities claim that the referendums will not have any legal consequences for the territorial integrity and the structure of Ukraine. They accuse the organizers of violating Ukrainian legislation.

Therefore, the opinion of the leader of the Southeast movement Oleg Tsarev is understandable. He considers a referendum in the Donbass historical a victory for the inhabitants of the region, but I am sure that the voting results will have to be defended. “The most important question - what's next?” That is, what to do tomorrow and the day after tomorrow? First, we must defend our gains, that is, the result of a referendum. And therefore, for the period of the formation of new institutions, including the army, we hope that the militias will stay with us in order to defend our victory, ”Tsareva quoted "Vesti". 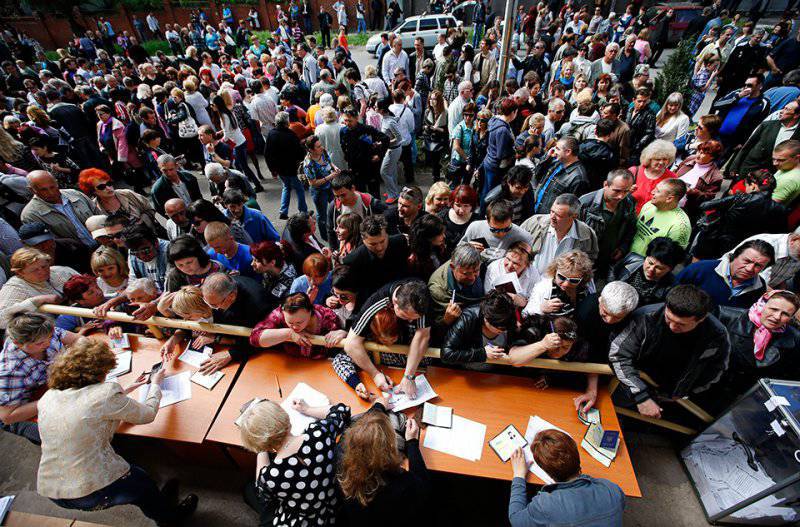 Construction of the Lugansk and Donetsk Republics is a difficult task, Tsarev believes: “This is a difficult job that will require a lot of time and effort from a large number of people. The main task - living conditions in the Lugansk and Donetsk Republics should be better than they were before, when we fed Kiev and western Ukraine, and not worse. Therefore, after the victory, we must roll up our sleeves and plow. Together. Our strength is in unity. ”

"Russian Spring", referring to the Ukrainian TV channel 112, reports other words to Tsaryov: “Recognition of the sovereignty of these two republics makes it possible to turn to other regions of the Southeast in order for them to follow the example of Donetsk and Luhansk.” He added: “After the Odessa events, the people of the Southeast decided that they would not live with this power in one state. We have a Nazi state. ”

It is curious that the referendum was also held ... in Moscow.

“Now I have returned from Kievskaya street of the hero city of Moscow. There, citizens of the Lugansk and Donetsk regions living in the capital of the Russian Federation gathered to take part in the referendum a little. Comrades, this is indescribable. Voting took place in the house number 21 on Kievskaya street. The queue had to be taken near the house number 7. According to my estimates, there were about 6-9 thousand Ukrainians in the queue (or should we say “former Ukrainians” now?;)). Moreover, new people constantly came up, and the old ones left. All joyful, smiles from ear to ear. They waved flags with inscriptions like "Gorlovka is a Russian city", "Donetsk People's Republic", etc. Periodically, they arranged a kind of roll call: one person shouted - "Krasnodon!", Another immediately picked up - "Mariupol!", The third answered - "Donetsk!" And so on - throughout the line. Striped ribbons were distributed. The setting was like ... I don't know ... May Day demonstration from the 80s or something. I didn’t take the camera, and I don’t know how to take pictures. But Channel One reporters were rushing along the line with cameras and microphones, so the picture would be in the news.

This is very cool, comrades. I have not seen so many happy people at once, in one place.

Some citizens stuttered about the Crimea - they say, “Crimeans wanted to come to Russia just because they didn’t know how difficult and hopeless life in the Russian Federation was.” They say that Crimeans mistakenly imagined that the Russian Federation was something like the USSR. Were led, they say, to Kiselev's propaganda. And soon all of them waiting for hellish disappointment. So, in the queue at Kievskaya street were people who know life very well in Putin's RF. And, I suppose, many of them had to live in Russia in the position of illegal immigrants, which means that the guys know life in Putin’s RF from the darkest and darkest sides. Vidali, I suppose, and police lawlessness, and corruption, and other bad things. Nevertheless, these guys want to arrange "life in Russian" in their home cities ... "

Here is such a visual picture. It will tell a lot to the average man about what the corrupt and corrupt authorities have brought to the “independent”. And the current fascists, worshipers of the IMF, will probably leave one memory from the separatist.

As for the full and accurate results of the referendums in Lugansk and Donetsk, they will be announced later today, at the rally.

It is noted that in connection with information about possible provocations of members of the election commission, carrying protocols to Lugansk, is accompanied by armed guards.

And, finally, the attitude to the referendum of the Kremlin.

As transmitted ITAR-TASSVladimir Putin will formulate the attitude to the referendums on the status of Donetsk and Lugansk regions "according to their results". This was told to the newspaper "Kommersant" press secretary of the head of state Dmitry Peskov. What exactly will be the decision of the president, "difficult to predict," he added.

The publication asked a question: will the fact that he himself asked supporters of federalization to postpone the referendum to a later date influence the position of the Russian president? A spokesman replied: “I didn’t ask, but I gave such a recommendation ... However, it was difficult to listen to it, even considering the authority of the President of the Russian Federation. Taking into account the conduct of real hostilities, residents are forced to act according to their own plan and based on the real situation. ”

Thus, Vladimir Putin is likely to speak out late tonight, waiting for the announcement of the full results of the vote in Lugansk and Donetsk. Do not miss the interesting news!

Observed and commented on Oleg Chuvakin
- especially for topwar.ru
Ctrl Enter
Noticed oshЫbku Highlight text and press. Ctrl + Enter
We are
Who benefits from the lie of Denis Pushilin: mayhem or lawlessness?Presidential Election - 2012. There is a vote! (Poll)
Military Reviewin Yandex News
Military Reviewin Google News
168 comments
Information
Dear reader, to leave comments on the publication, you must sign in.