The police chief of Mariupol hung on aspen? 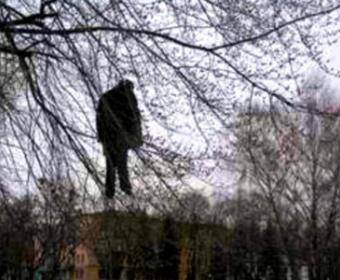 Central News Agency Novorossia Novorus.info reported that the people's court sentenced the former head of the police department of Mariupol Valery Andrushchuk to capital punishment. It is noted that it was he who gave the order to shoot at the inhabitants of the city. The verdict was executed on an aspen in a forest belt on the northern outskirts of Mariupol, the fighters of the battalion "In memory of May 2" of the Lugansk People's Army.


However, RIA "News" published the message of the people's deputy of Ukraine and presidential candidate Oleg Lyashko that the abducted police chief Valery Andrushchuk, who was allegedly hanged, was released.

“Together, we managed to free Valerius Andruschuk from the captivity of the head of the Internal Affairs Directorate of the city of Mariupol from captivity. He is alive, but in a very serious condition, ”wrote Lyashko on Facebook.

It should be recalled that 9 May Andrushchuk fulfilled the direct instructions of the former deputy of the illegitimate Verkhovna Rada Oleg Lyashko, giving his subordinates the order to use firearms weapons to disperse the demonstration of the city residents. The police refused to execute the criminal order, after which Andruschuk shot one of them and locked himself in his office, calling for help from the National Guard detachment.

According to the latest data of the Donetsk Regional State Administration, nine people died during the operation of the Ukrainian security forces, and 42 were injured.