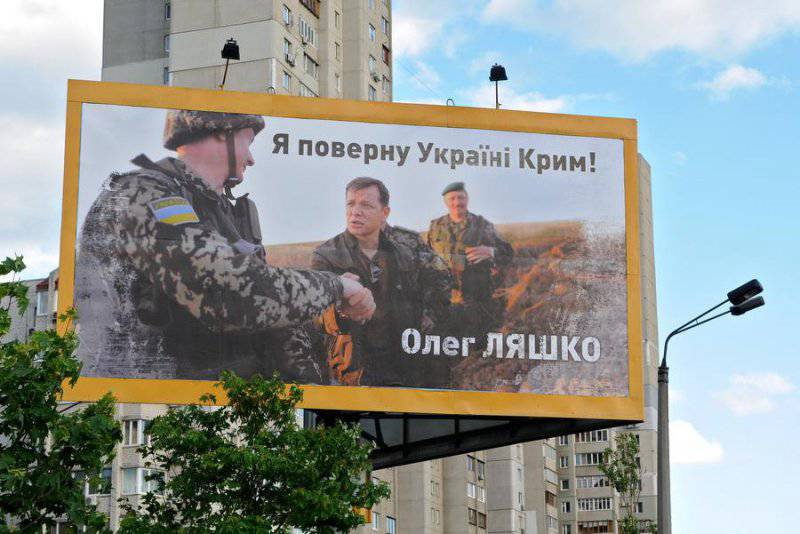 A presidential candidate of Ukraine, MP Oleg Lyashko was detained in Mariupol by the militia of the proclaimed Donetsk People's Republic. This was confirmed by the RT people's mayor of Slavyansk Vyacheslav Ponomarev.


In a telephone conversation with RT, Ponomarev also said that he still does not know where exactly the presidential candidate is located. Previously, information about the detention of Oleg Lyashko published a number of media.

"It is true that Lyashko was caught, we will soon catch and (Dmitry) Yarosh", - told RIA News representative of the militia, noting that the deputy is transported from Mariupol to another location, but without specifying where.

Militias reported that in Mariupol Lyashko tried to oppose the holding of a referendum on the status of the Donetsk region.

At the same time, a message appeared on Facebook's Lyashko page: “The terrorists said they captured me. Hole them from a donut, not Lyashko. I live, I continue to fight in the East. " However, no photo or video confirmation of these words was presented.

The Internet has repeatedly published videos on which the presidential candidate mocked people who oppose “euromaidan”. The last of these was the Minister of Defense of the self-proclaimed Donetsk People's Republic: for an unknown reason, Lyashko was allowed by the Ukrainian special services to interrogate him.

The politician is also famous for his harsh statements against the Russians and opponents of the Kiev authorities. In March, he introduced a bill in which he proposed to consider the participants of "separatist rallies for joining Russia", as well as those who hinder the movement of military and military equipment, as traitors and supporters of the occupiers. Moreover, at the time of "military aggression" to them, as well as to saboteurs, murderers, marauders, deserters and spies, Lyashko proposed to apply the death penalty.

Ctrl Enter
Noticed oshЫbku Highlight text and press. Ctrl + Enter
We are
Reports from the militia of New Russia for 27-28 September 2014 of the year
Military Reviewin Yandex News
Military Reviewin Google News
224 comments
Information
Dear reader, to leave comments on the publication, you must sign in.