16 May 2014
19
The development of military equipment and weapons, including the creation of subtle strike aircraft and precision-guided munitions for them, places new demands on defense systems. Increasingly important are electronic intelligence systems (RTR), which can complement, and in some cases replace, radars. T.N. passive radiolocation allows you to determine the location of the target on the radio signals emitted by it. Modern systems of this purpose in accuracy of determining the coordinates of the target are close to the "traditional" radar and have great prospects. 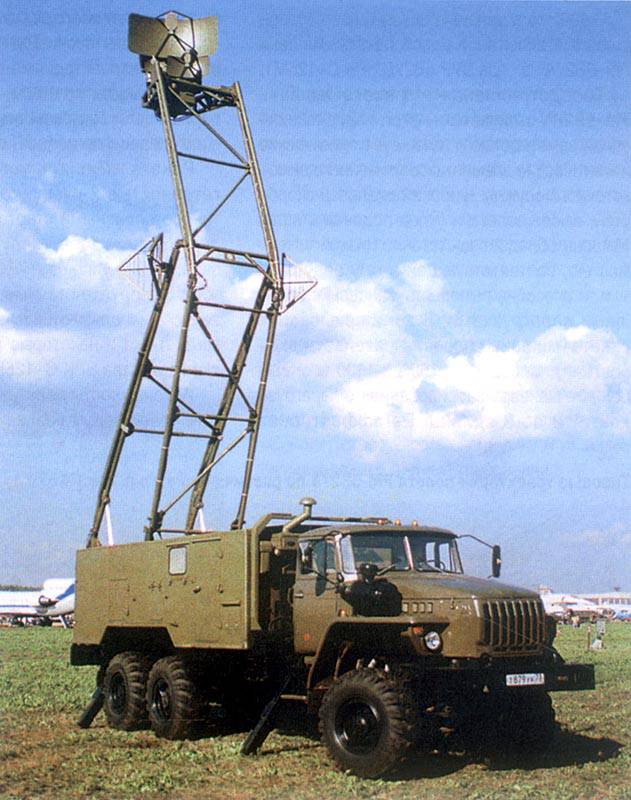 In the late nineties, the Belgorod Scientific-Production Enterprise "Spec-Radio" created a new RTR complex called 85V6-A "Vega". This complex is designed for the detection, recognition and tracking of various air, ground or surface targets. To detect a target, the complex receives and processes the radio signals emitted by its electronic equipment. Information on the number, coordinates and other parameters of targets can be transmitted to electronic warfare complexes, air defense units, and combat aviation etc. With such capabilities, the Vega RTR complex can be used as part of air defense systems, monitoring the desired area, and is also capable of supporting other means of air defense systems in the presence of interference by the enemy.

Complex 85В6-A "Vega" consists of several components that work together. These are the three radio intelligence stations 85B6-E Orion and the control room. Thus, the system "Vega" includes four trucks with the necessary equipment. For power supply, all elements of the complex are equipped with their own diesel power plants mounted on car trailers. This architecture of the technical means of the complex allows to place its individual elements at some distance from each other, with the help of which high characteristics of target detection are achieved.

Machines with Orion station can be located at a distance of 30 kilometers from each other. The maximum distance to the control point should not exceed 20 km, due to the peculiarities of the data transmission systems. The task of Orion stations is the reception and primary processing of radio signals. The obtained information is transmitted via a secure channel to the control center, where it is analyzed. Using the triangulation method, the automation system "Vega" is able to determine the location of an object with the included radio-electronic means. In addition, the equipment independently determines the trajectories of the detected targets. The data on the position and movement parameters of the detected targets are transmitted to the command post or to other users of it: anti-aircraft units, EW complexes, etc.

All equipment of the 85B6-E Orion electronic intelligence station is mounted on a wheeled chassis and car trailer. The latter is a diesel power plant based on two generators. In addition, the trailer carries a mast with a source of calibration signals designed to tune the main systems of the station. Electronic equipment is placed on a truck, in a special body-van. The base car is equipped with a leveling system - hydraulic outriggers. On the roof of the box body there is a lifting-mast device with an antenna for receiving radio signals. During operation, the receiving antenna is located at a height of 13,5 meter and rotates around a vertical axis at a speed of 180 ° per second. This allows you to receive signals from any direction in azimuth, the maximum elevation angle is 20 °. The RTR Orion system is equipped with electronic equipment capable of processing up to 60 targets in one antenna turn. Orion equipment operates in the 0,2-18 GHz frequency band. An instantaneous reception bandwidth is provided in 500 MHz with a resolution up to 1 MHz. The duration of the received pulse is determined with an accuracy of 0,1 μs. The error in determining the direction to the target does not exceed 2-3 degrees (depending on conditions). 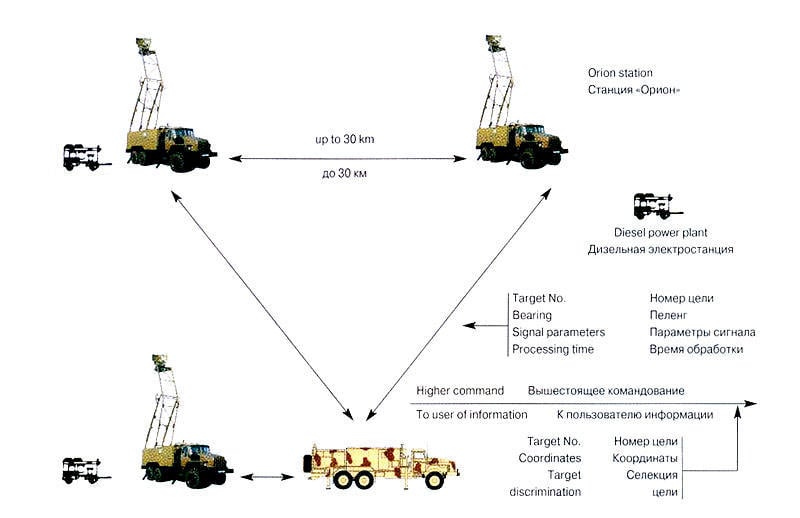 The target detection range depends on their parameters: the power of the emitted radio signals, the operating mode of the emitters, etc. The maximum distance from which the Orion station can detect an enemy strategic bomber exceeds 400 kilometers. For tactical aviation, this parameter is within 150-200 km. Having received the signal, the station's equipment compares it with the records in the existing database and determines the probable type of target. Information about the position and other parameters of the target is transmitted to the control center or other consumers with a delay of no more than 6-10 seconds. If necessary, the PTR 85B6-E Orion station can be used independently, not as part of the Vega complex.

If necessary, the set of means of detecting the “Vega” system can be supplemented with additional elements on the basis of the “Okhota” radio-technical control points. This allows you to improve the capabilities of the complex "Vega" to detect targets in the near zone.

The control center database contains information about one thousand different electronic systems that can be recognized by the system. It is argued that at the request of the customer the number of records in the database can be increased. By processing data from Orion stations, the control point of the Vega complex is capable of tracking up to 60 targets simultaneously. Information on targets can be transmitted to any consumer, from the command post of the compound to anti-aircraft complexes, etc.