Islamabad is looking for new allies 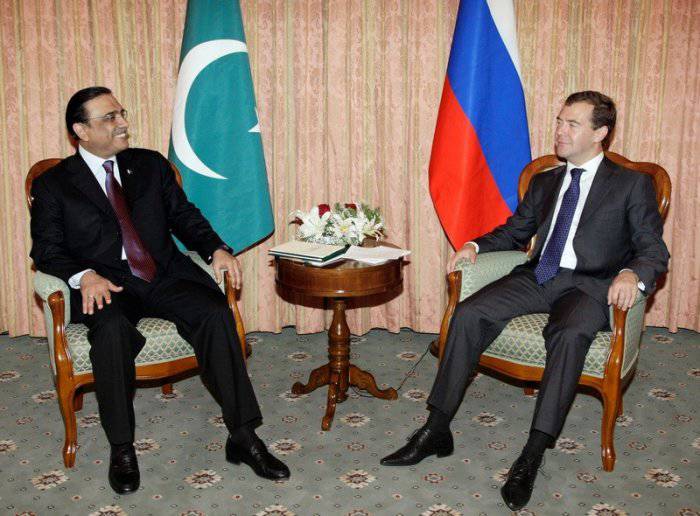 Pakistani President Asif Ali Zardari paid an official visit to Russia - this is the first visit of this level in 37 years. He must "unfreeze" the political and economic and trade cooperation of the two powers by drawing a line under the period of confrontation. Islamabad is looking for new allies, Washington is increasingly pushing the country to a catastrophe, so the Pakistani elite are offering Moscow to participate in the modernization of its key enterprises and in promising energy projects.

Asif Ali Zardari has already met with D. Medvedev in June 2009 and 2010 in the framework of the SCO summits in Yekaterinburg and Tashkent.

The USSR was one of the first powers to recognize Pakistan; diplomatic relations were established on 1 on May 1948 of the year. In the 1960-1970-ies, the countries actively cooperated, the Soviet Union helped Pakistan to create the foundations of industry. In the 80-ies, there was a cooling in relations, Pakistan took an active part in the war with the USSR in Afghanistan together with the USA, and Mujahideen bases were established on its territory. In fact, Pakistan fought against the Union, only the disintegration of the Soviet elite prevented the Soviet army from striking Pakistan in order to destroy the rear base of Afghan gangs.

Islamabad invited Gazprom to take part in the development of national fields, it was announced that the Russian Federation could participate in the construction of the gas pipeline Turkmenistan-Afghanistan-Pakistan-India. “I brought to Moscow the hopes of our parliament, the government, the prime minister, as well as the common people of Pakistan that we will be able to establish bilateral relations with Russia,” said Assef Ali Zardari.

What is the reason for such a rapid "warming" of relations? Islamabad is concerned about the increasing pressure from its traditional "ally" - the United States. The States have already violated Pakistan’s sovereignty several times, attacking Taliban bases on its territory, and accusations of harboring Osama bin Laden have appeared. Islamabad in a difficult situation, on the one hand, is growing discontent of the people with the regime that allows the US to behave in Pakistan as "at home". Therefore, I have to make loud statements: the killing of bin Laden on the territory of Pakistan was regarded as "unilateral actions, fraught with serious consequences," even threatened to continue to rebuff such actions "in full force." Although it is clear that the Pakistani military will not dare to shoot down planes and helicopters of the United States, the war with the United States is the end of Pakistan. The dependence on the US is enormous, including the supply of modern weapons.

In addition, Islamabad is concerned about the “Arab syndrome”, it is becoming ripe that Washington is ready to sacrifice any ally in order to blow up Eurasia, creating the so-called “arc of fire”. Although Pakistan is an ally of China, Islamabad is also looking for other footholds.

- The participation of the Russian Federation in the TAPI gas pipeline project (“Turkmenistan-Afghanistan-Pakistan-India”), this project under D. Bush was announced by Secretary of State Condoleezza Rice. But the project remained on paper due to the opposition of Iran and the Russian Federation, which were not going to give up Turkmen gas, Gazprom has its own "pipe". Currently, Islamabad is ready to compensate Moscow for the costs by allowing Russian companies to the fields of Pakistan.

- Another large-scale project is participation in the construction of the CASA-1000 power line (Central Asia - South Asia). The project should start the transit of electricity generated at the Rogun hydropower plant in Tajikistan and the Kambarata hydropower station-1 in Kyrgyzstan, through Afghanistan to Pakistan and India.

- Islamabad proposes Moscow to help modernize the Pakistan Still Mills iron and steel works in Karachi, which was built during the years of cooperation between Pakistan and the USSR. Participation in the modernization and other enterprises of the mining and steel industry has been proposed. Participation of Russian Railways in the development of the railway network in Pakistan is possible.
Ctrl Enter
Noticed oshЫbku Highlight text and press. Ctrl + Enter
Military Reviewin Yandex News
Military Reviewin Yandex Zen
6 comments
Ad