Interviewed - scared ... On a poll by a German TV channel of their viewers about Putin's course

12 May 2014
207
The other day, German informationnews Channel "N-TV”(“ En-Te-Fau ”), whose main office is based in Berlin, decided to conduct a sociological survey among representatives of its own audience. The word “research” sounds loud, of course, since this study consisted of one single question, which ultimately made a lot of noise, forcing once again to think about what is meant by the term “freedom of speech” in the West ?


So, the question from the mentioned TV channel looked like this: “Haben Sie verständnis für Putins Kurs?”, Which can be translated into Russian as “Does Putin's course cause you understand?”, Or how do you support Putin’s course? the answer is "yes" and "no." It is obvious that the poll itself at En-Te-Fau was born in connection with the events that are unfolding in Ukraine today. And given the specific anti-Russian specifics of this German TV channel, we can assume that the authors of the survey and media platform chefs expected a response from viewers that would fit into the framework of the thesis “All troubles in Ukraine today are from Putin’s bloodthirsty course, and therefore, neither understand nor support this course definitely not. That is, "N-TV" expected that the overwhelming majority would say "no!"

However, German viewers planted En-Te-Fow a big pig in the form of the following survey results: 89% respondents answered yes and only 11% said no to understanding and supporting Putin’s course. 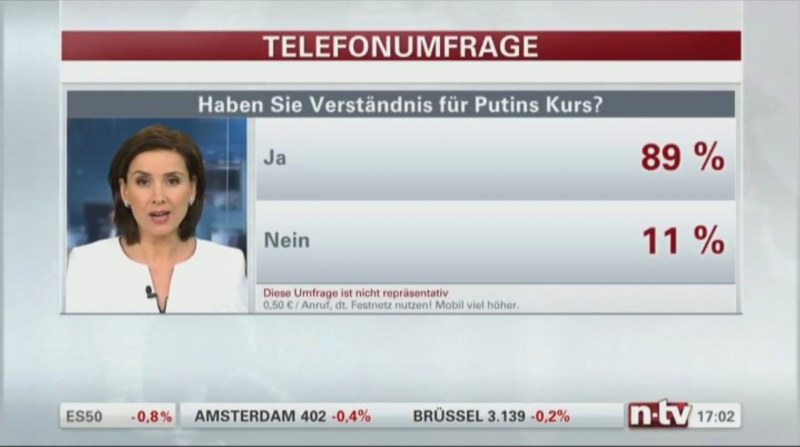 The result, apparently, so discouraged the authors of the survey that, without thinking twice, they removed both the survey and its results. However, the time during which the telephone survey went on the TV channel “En-Tae-Fau”, it was quite enough for users (including the audience of this channel, of course) to spread its results on various sites of the Federal Republic of Germany and not only Germany. And in the overwhelming majority of cases, users of Internet sites were surprised and outraged by not the result of the survey, but the fact that “en-te-faushniki” survey, together with the results, being expressed by modern slang, was stupidly deleted - they say, it’s not good for the European public to show that Germany's understanding and support of the course of the Russian president is quite common.

One of the sites where the “secret” became clear is the German-language resource. "DasGelbeForum"where one of the users shares information about the mentioned “N-TV” project. In addition, the results of the survey replicated other Internet resources, including the European political forum. http://www.politik-forum.eu/. A great work on the demonstration of the direction in which freedom of speech in the West is currently moving, was carried out by the Ukrainian journalist Anatoly Shary, who now lives in the EU. Shary found the most remote survey from the main page of the N-TV site on the teletext page of the same channel, for which, as it turned out, the results with the unequivocal support of the Russian president are like a bone in the throat. 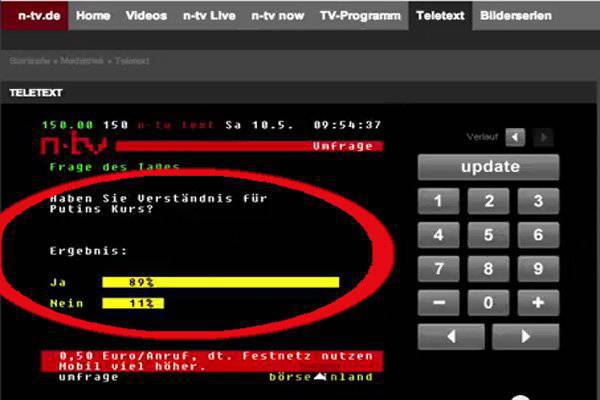 In general, the German television “did not clean up the“ tails, ”thanks to which we had yet another proof that many foreign media outlets turned from real media into their pitiful similarity. And in that they are a “pitiful likeness,” such media outlets actually sign with their own hands (as an example, the very same “Al-Tae-Fau”, who failed to unsettled the results of a telephone survey of television viewers). And yet another proof emerged that foreign viewers (users, readers) “for the life of me” are not completely and completely turned into zombies by the Western media, although the latter do everything they can for such a zombie, and everything that is impossible, sometimes getting into, let's say , naughty situations.

The German journalist, Christoph Hörstel, also talks about the “unfinished” poll of the German TV channel on his page in Facebook. In his small post, Hörstel leaves no chances to En-Te-Fau, publishing a screen-shot of the page with the results of a telephone vote. One of the readers on Facebook under the nickname Charly Zweitausend commented on the information provided by the German journalist as follows (translated from German):

Only the Ukrainian conflict opened my eyes to the German press (Springer, Spiegel, ARD, ZDF). It's not fair. I believe that such media manipulations will be used for a long period of time. So I do not watch them and do not read them, but use other sources to collect information.

True, there were also supporters in Germany of deleting the poll from En-Te-Fow, who stated in social networks that, they say, the deletion is fair, since a little more than a thousand people took part in the poll, and therefore, the survey was not of a character representativeness. Of course, the opinion of the thousands of TV viewers who spoke on the phone is not the opinion of the entire Western European community, but why did the editing of the TV channel decide to delete this particular poll, leaving dozens of others intact, in which a smaller number of viewers took part? ..

And there were gentlemen who said that ordinary Germans simply did not understand the question: they say, Putin’s policy seems to cause understanding, but not the understanding that would lead them to support the course of the Russian president in Ukraine. They say they understand Putin, but not that they support ...

In general, the “lawyers” decided to clarify the essence of the situation, but the more such “lawyer attempts” appear after a telephone survey from “N-TV”, the more obvious the fact that there is no real freedom of speech and an unbiased presentation of information by the Western media about world events.