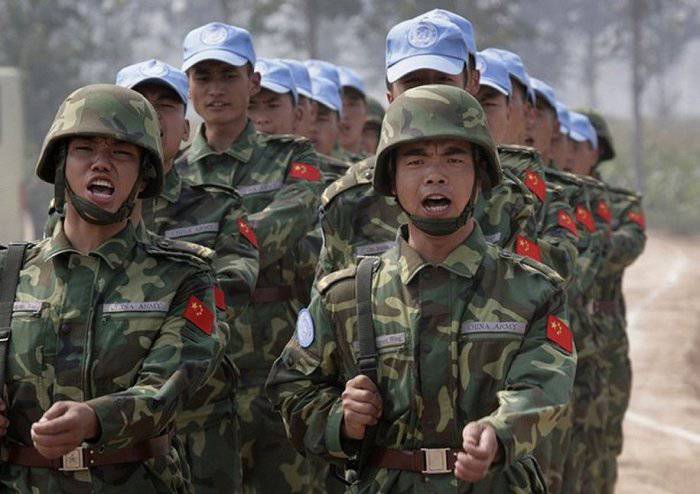 - The question is not whether China will attack Russia, but when? This is an article by a well-known military expert, deputy director of the Institute for Political and Military Analysis, Alexander Khramchikhin.

The author believes that if large-scale military aggression in the “classical” form will ever be committed against Russia, then China will be the aggressor with a probability of 95% (if not 99,99%).

China's colossal overpopulation, combined with its rapid economic growth, creates a complex set of problems, for a very brief description of which a large separate article is required. Moreover, the interrelation of these problems is such that the decision of some aggravates others. China is objectively unviable in its current borders. It should become much more if it does not want to become much less. It cannot do without external expansion to seize resources and territories, such is the reality. You can turn a blind eye to her, but she is not going anywhere.

In addition, there is no need to imagine that Southeast Asia will become the main direction of China's expansion. There is quite a bit of territory and resources, with a lot of local population. The opposite situation - a lot of territory, huge resources, very little population - exists in Kazakhstan and the Asian part of Russia. And this is where China's expansion will go. Moreover, the trans-Ural territories of the Russian Federation in China are considered to be their own. A brief description of the relevant Chinese historical concepts can be devoted to another long article. Only a person who has absolutely no idea what China and the Chinese are can believe that the border problem between the Russian Federation and the PRC has been resolved.

Of course, for China, the peaceful form of expansion (economic and demographic) is preferable. But the military is not excluded. It is extremely significant that in recent years the Chinese army has been conducting exercises that it is simply impossible to interpret as preparations for aggression against Russia, and the scale of the exercises (spatial scale and number of troops involved) is constantly growing.

At the same time, apparently, we still do not realize that we have long lost not only quantitative but also qualitative superiority over China in military equipment. In Soviet times, we had both, and this, as the “microwaves” behind Damanski showed, compensated for China’s tremendous superiority in manpower.

China lived for a very long time by giving it the USSR in the 1950's - the beginning of the 1960's. However, after warming relations with the West, he gained access to some samples of American and European technology, and from the end of the 1980-x began to acquire the latest technology in the USSR, and then in Russia, thanks to this, in many classes, "jumping over" a generation. In addition, China has always had the exceptional ability to steal technology. In 1980, Chinese intelligence even managed to obtain in the United States blueprints of the latest W-88 warhead from a Trident-2 ballistic missile for submarines. And as usual, China steals equipment in large quantities.

For example, nothing is known about the fact that Russia sold the PRC multiple launch rocket systems (MLRS) Smerch or, all the more, a license to manufacture them. Nevertheless, the Chinese Army first appeared the MLRS A-100, very similar to the Smerch, and then the PHL-03 - its full copy. The self-propelled artillery installation of the Tour 88 (PLZ-05) is very similar to our "Mstu", which we again did not sell in the PRC. We never sold China a license to manufacture the C-300 anti-aircraft missile system, which did not prevent the Chinese from copying it under the name HQ-9. However, the French, for example, successfully stole the Crotal anti-aircraft missile system, the Exochet anti-ship missile, the M68 shipboard artillery, and so on.

Synthesizing foreign technologies and adding something of their own, the Chinese military-industrial complex begins to create fairly original samples: the Tourn 95 anti-aircraft missile system (PGZ-04), the PLL-05 and PTL-02 self-propelled guns, and the BMP ZBD-05, etc. 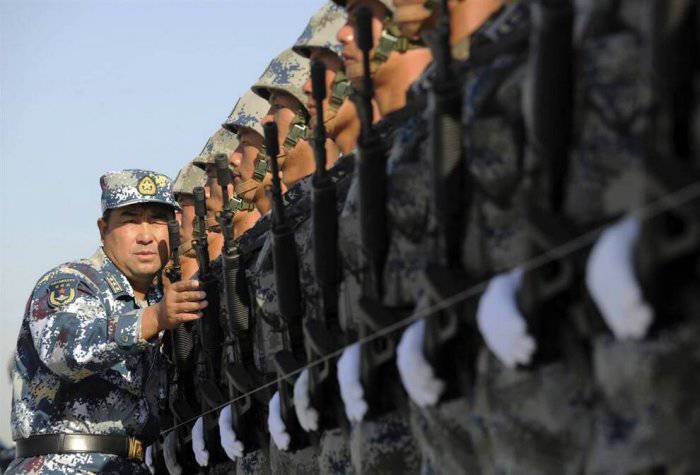 In general, as has already been said, in almost all classes of conventional weapons, the qualitative superiority of Russia is a thing of the past. In some ways, China even got around us - for example, in drones and in rifle weapons. The Chinese are gradually changing the Kalashnikovs to the latest automatic rifles created according to the bullpup scheme based on both the same AK and Western rifles (FA MAS, L85).

Moreover, although some experts believe that China is technologically dependent on the Russian Federation as its main supplier of weapons (therefore, it cannot attack us), this is a pure myth.

China acquired in Russia only such weapons, which were intended for operations against Taiwan and the United States (while Beijing was seriously planning an operation to seize the island). It is obvious that a sea war between the PRC and the Russian Federation is almost impossible, there is no need for either side or the other. The war will be ground character.

In this regard, it should be noted that China did not acquire any equipment in Russia for its ground forces, since it will be used against Russia in the event of war.

Even in the field of the Air Force, China got rid of its dependence on the Russian Federation. He bought in Russia a limited number of Su-27 fighter jets - in total 76 units, of which 40 is Su-27UB. From such a unique ratio of combat and combat training vehicles, it is quite obvious that Russian-made Su-27 were purchased for flight crew training. Then, as is known, China abandoned the licensed production of Su-27 from Russian components, having built only 105 aircraft from the planned 200. At the same time, he copied this fighter and began its unlicensed production called J-11В with its own engines, weapons and avionics. Moreover, if in China 1960-s copying of the Soviet samples was their deliberate primitivization, then J-11В, judging by the available data, is almost no worse than Su-27.

It may be noted that in recent times, China’s military-technical cooperation with Russia is being curtailed. In part, this can be explained by the fact that the rapidly degrading Russian military industrial complex is no longer able to offer China the weapons and equipment that it needs. Another explanation is that Beijing is seriously considering the possibility of conducting combat operations against the RF Armed Forces in the foreseeable future.

Since the J-11B in its tactical and technical characteristics is approximately equal to the Su-27, and created on the basis of the Israeli “Lavi”, but using Russian and its own technologies, the J-10 is quite comparable to the MiG-29, we have no qualitative superiority in the air . A quantitative superiority will certainly be on the side of China, especially given the almost complete collapse of the Russian air defense system (primarily in the Far East). According to the Su-30, it will be generally overwhelming: China has more than 120, ours - 4. The main drawback of the Chinese aviation - the absence of normal attack aircraft and attack helicopters, but this will not be a big disaster for them, because on land the situation for Russia is even worse. 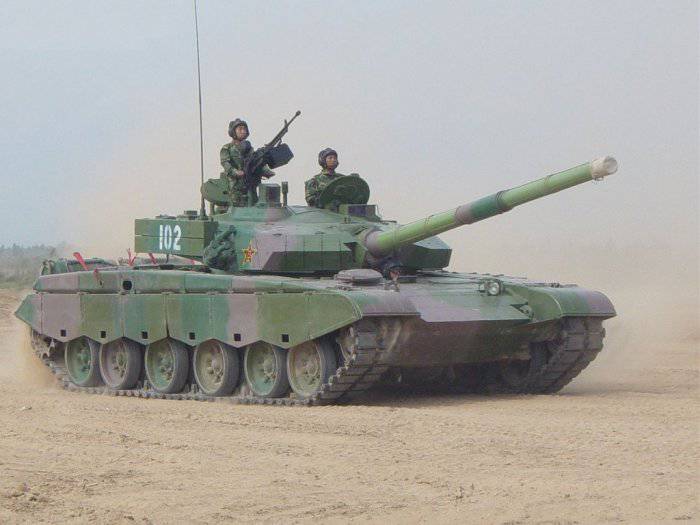 Best chinese Tanks - Ture 96 and Ture 99 (aka Ture 98G) - practically no worse than our best tanks - T-72B, T-80U, T-90. Actually, they are all “close relatives,” and therefore their characteristics are very close. At the same time, the leadership of the Russian Defense Ministry has already announced the actual liquidation of our tank troops. Tanks throughout Russia should remain 2000. China has about the same number of modern tanks now. There are much more numerous (at least 6000) old tanks (from Ture 59 to Ture 80), created on the basis of the T-54. They are quite effective in the fight against infantry fighting vehicles and armored personnel carriers, as well as to create a "mass effect". It is likely that the PLA command uses these very machines for the first strike. All the same, they will inflict some kind of losses on us, and most importantly, they will divert our anti-tank weapons, after which an exhausted and weakened defense will be hit with the use of already modern technology. By the way, in air, a similar "mass effect" can create old fighters of the J-7 and J-8 types.

That is, according to modern models of armaments, the Armed Forces of Russia and the Chinese Army now have approximate equality (qualitative and quantitative), which confidently (and not very slowly) turns into the advantage of the Chinese army. At the same time, the latter has a huge “overhang” of old, but still quite “good” samples, which are perfect as an “expendable” material to wear out the defense of the Russian troops. Due to the presence of such a unique problem in China as the “shortage of brides”, the loss of several hundred thousand young males for the Chinese leadership seems to be not only a problem, but a blessing. And certainly not the problem of "recycling" in the battle of several thousand units of outdated armored vehicles.

Already, only two of the seven military districts of the Chinese army - Beijing and Shenyang, adjacent to the border with Russia - are stronger than all the Armed Forces of Russia (from Kaliningrad to Kamchatka). And at the potential theater of military operations (Trans-Baikal and the Far East), the forces of the parties are simply incomparable, China surpasses us not even times, but dozens of times. In this case, the transfer of troops from the west in the event of a real war will be almost impossible, since Chinese saboteurs are guaranteed to cut the Trans-Siberian at once in many places along its length, and we don’t have other communications with the east (we can transport people by air, but not heavy equipment) .

Tanks are not our fast

At the same time, and in combat training, especially in units and formations equipped with the most modern equipment, the Chinese army has long bypassed us. Thus, in the 38 Army of the Beijing Military District, the artillery is fully automated, it is still inferior in accuracy to the American, but already surpassed the Russian. The rate of advance of the 38 Army reaches 1000 km per week (150 km per day).

Accordingly, in an ordinary war we have no chances. Unfortunately, nuclear weapons do not guarantee salvation, because China also has them. Yes, while we have superiority in strategic nuclear forces, but they are rapidly declining. At the same time, we do not have medium-range ballistic missiles, but China does have them, which almost eliminates their lag in intercontinental ballistic missiles (which is also declining). The ratio of tactical nuclear weapons is unknown, only you need to understand that we will have to use it on our own territory. As for the exchange of strategic nuclear forces, the Chinese potential is more than enough to destroy the main cities of European Russia, which they do not need (there are many people and few resources). There are very strong suspicions that, understanding this, the Kremlin will not go for the use of nuclear weapons. Therefore, nuclear deterrence against China is the same myth as its technological dependence on us. Learn Chinese