The slaughter in Odessa was prepared under the leadership of Turchinov 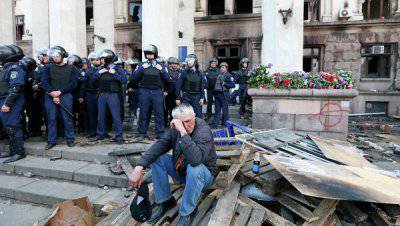 The information contained in this text was presented by a law enforcement officer. When it seems that from the opposite side are some nonhumans and fascists, we should not forget that the enemy is not monolithic. Even Hitler had his Stauffenberg. There are people who were horrified by what happened in Odessa and among the members of the junta.


We have no right to disclose his name - otherwise in stories Ukraine, there will be one more suicide who shot himself with two shots to the head. Development

Odessa after the loss of the Crimea and the people's revolution in Mariupol remained the only sea gate of Ukraine and acquired the status of the most important city after Kiev. Vladimir Nemirovsky, head of the Regional State Administration, appointed by the junta, showed complete political impotence — in two months he could not disperse the people's camp on the Kulikovo field, nor bring the police under control, nor establish contact with local few but active Ukrainian nationalists.

A meeting on the preparation of the operation in Odessa took place 10 days before the tragedy. Turchinov personally presided. The discussion was attended by Interior Minister Arsen Avakov, head of the SBU Valentin Nalyvaychenko and NSDC Secretary Andrei Paruby. Head of the Regional State Administration of the Dnipropetrovsk region Igor Kolomoisky was also involved in the consultations on the operation.

The idea to use in the operation of football "ultras" belonged to Arsen Avakov. Ever since the work of the head of the Kharkiv Regional State Administration, he had exits to fan leaders, whom he, even while living in Italy, continued to provide sponsorship.

Kolomoisky transferred the Dnieper battalion under the leadership of the Odessa law enforcement officers. He also set a cash premium for each person killed - 5000 dollars.

Korchinsky’s militants were also involved in the operation. It was they who wore red bandages on their hands. The followers of Korchinsky were assigned a key role in organizing provocations: they allegedly acted as defenders of the tent camp on the Kulikovo Field, and then lured the participants to the House of Trade Unions, where the massacre took place.

15 checkpoints were organized around Odessa, where the insurgents of the Dnieper-1 battalion, personally subordinate to Kolomoisky battalion, as well as representatives of the Right Sector from both Dnepropetrovsk and the western regions of Ukraine, were strengthened. In addition, two hundred “Maidan’s Self-Defense” arrived in Odessa, submitting to the Acting the head of the presidential administration Sergey Pashinsky - the one who was caught with a sniper rifle in the trunk of the 18 in February on Maidan. Pashinsky later claimed that he was not initiated into the full plans of the operation, and sent his people exclusively to "protect the citizens of Odessa". Thus, the total number of fighters from other regions of Ukraine was about 1400 people - to the question that the House of Trade Unions was allegedly burned by “Odessans”.

From the side of the Odessa police, the operation was led personally by the head of the regional police, Petr Lutsyuk and his deputy, Dmitry Fuchedzhi. Lutsyuk was instructed to neutralize the head of the RSA, Nemirovsky, so that he would not arrange for amateur activities that could disrupt the operation. Fuchedzhi led the militants directly on Grecheskaya Square, where he was allegedly “wounded” in order to avoid responsibility for further events.

2 May in 07: 59 arrived in Odessa train from Kharkov, which arrived Metalist fans, among whom were involved in the operation "ultras". In addition, at the same time, the militants of the Dnipro-1 and Right Sector battalion entered the city in small groups. Part of the militants "Maidan Self-Defense" also arrived officially from Kiev, but most without symbols came to the city by car. The Odessa police that day had a strict order not to stop cars with Kiev, Dnepropetrovsk and Lviv numbers.

In the afternoon, some of the militants set off in the direction of the Cathedral Square, where a meeting of the participants of the “March for a Unified Ukraine” was appointed. Their task was to organize the crowd and lead her to the barricades on the Greek Square. The group of "suicide bombers" put on St. George ribbons, put on balaclavas and went on a march along Aleksandrovsky Prospect. It is they who appear in numerous photo and video recordings in the role of “pro-Russian activists”. In order to distinguish their activists from the real Odessa activists, the provocateurs put on red sleeves on their sleeves. Policemen dedicated to the details of the operation also wore red bandages. Alas, real activists who did not know these details, succumbed to the provocateurs' appeals, and also went to “stop the fascists” - this is how they were told what was going on.

The further course of events was recorded by numerous eyewitnesses. Allegedly, “pro-Russian” provocateurs, with the support of the police, lined up near the shopping “Athena”, at the intersection of Grecheskaya Street and Vice-Admiral Zhukov’s lane, provocateurs from the side of the fans, including both representatives of the “Right Sector” and Korchinsky, attacked them (this even observers are positively adjusted towards the Maidan) http://napaki.livejournal.com/100072.html firearms were used on both sides weapon, there were victims on both sides.

The task of distracting “honest” fans from a football match and directing the crowd to Kulikovo Field was fully implemented. “Having driven” the crowd, the provocateurs retreated to the shopping center “Athena”, from which they were later taken out by the police. There were no victims among them - only the wounded.

While there were clashes on the Greek, a group of criminals from the Right Sector was preparing to carry out the main part of the operation, codenamed Ola, from the phrase mizbah a-ola, which in Hebrew means an altar of burnt offering. They entered through the rear entrance to the House of Trade Unions and fortified themselves in the basement and in the attic. This group included only proven militants with experience of killing people.

At that time, while the crowd went from Grecheskaya Square to Kulikov Field across the entire center of the city, part of the provocateurs on cars outnumbered the bulk, ran to the camp and made a panic: “Right sector is coming!”, “They are going to kill!” And t Under the direction of provocateurs, instead of scattering around the city, many activists entered the House of Trade Unions. Some of them went down to the basement - from there they did not leave the living, people were tortured, killed, and cut with machetes. Some of them went up the stairs Caustic deadly carbon monoxide on the Yarem ice structures It would be formed due to the use of gasoline mixed with napalm recipe these hellish cocktail was prepared by chemists Maidan, but there has not been used in Odessa this mixture was used for the first time and did so intentionally:.. needed to slaughter a large number of those killed to intimidate the whole country.

The “battle” for the House of Trade Unions lasted for several hours - while some of the militants imitated resistance and threw Molotov cocktails from the roof, the rest methodically cut, choked and burned people. In order that nobody could put out the fire, the building was completely turned off the water.

After the completion of Ola, the killers from the Right Sector left the building through the side and rear exits and left the city. The building entered the police. The official number of victims - 46 people - is only killed on the floors of the building. The main victims from the basement were not among them. The exact number of dead is unlikely to be known once, but most sources call the 120-130 people.

The truth is not to hide

Having privatized the police and the SBU, the junta forgot about the prosecutor's office. And now. Attorney General Oleg Makhnitsky says: "This action was not prepared at some internal level. It was a planned, coordinated, clearly action, in which the authorities also took part."

It is unlikely that he will be given the name of the real perpetrators of the tragedy. But to completely hide the truth about what happened in Odessa the junta will not succeed. The eternal shame of the bloody murderers!