Ukraine: a lost war for brains

11 May 2014
349
Today, we can state with confidence the fact that the war for the brains of the Ukrainian inhabitants is lost with a bang. Sad but true.


It is hard to judge what the secret is here, but the media that support the Kiev junta won a complete and unconditional victory over the mind and consciousness of the average man in the street.

Apparently, the main part of the brains of the residents of Ukraine was not ready for such pressure. The old adage says that if a person says every day that he is a donkey, then soon he will start screaming in an ass. Apparently, this is what we are seeing.

What else can explain the general belief that today the Ukrainian media is being dumped on the heads of ordinary people? More precisely, in the head.

The Kharkov Fedorenko family, with whom I have been friends for more than five years, stops communicating with me. “We ate and drank together, you came to us. And now you are for those who want to crush us with their tanks". The finish, and yet quite reasonable people were a year ago.

The father of our lodger, Alexander Demyanenko, who has been working in Voronezh for three years, collects furniture, a Kiev pensioner who receives 700 hryvnia, declares to his sons: “I will die of starvation, but I will not take more of your bloody moskal money!”. And stops answering calls of both sons.

I am sure many of the readers will be able to give more than one such example. The essence is the same - total fear of Russia and everything connected with it. The adoption of the wording "separatists" and "terrorists" for residents of the south-east. Plus, sheer aversion to what the people of Donbass are striving for.

This is who you have to be to believe that people in the house of trade unions in Odessa self-exploded, self-burned, shot and stifled. And further on the list. And they believe, oddly enough. Sufficiently relevant resources to look through. And condemn those who go to all, just to provoke a split unhappy Ukraine and act on the orders of the FSB of Russia. And of course, for Putin’s money.

The general attitude to events in the southeast is generally carcasses of light. According to the majority, there seems to be a bunch of corrupt terrorists and saboteurs abandoned from the territory of Russia. And only the fact that they are hiding behind local residents taken hostage does not allow the gallant armed forces and the National Guard under to cope with them.

How did it happen that such a big and beautiful people turned into a flock, driven by a gang that seized power?

Why is it necessary to brutally kill them in order for a clearing to begin in the heads of Ukrainians?

Why only a part of this people could find the strength to resist in this war for their tomorrow?

What else needs to happen in order for the Ukrainians to see their sight? More blood? More death? How many?

I am painfully sorry that only time will give answers to these questions. 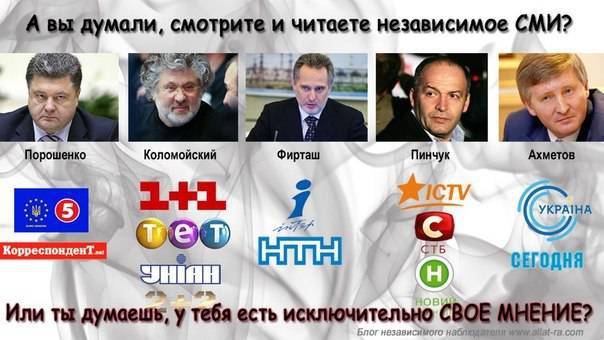 Ctrl Enter
Noticed oshЫbku Highlight text and press. Ctrl + Enter
We are
Results of the week. “I respect you, and you respect me, we are dear people”Results of the week. “And you, stupid, scoffed at me ... Here's a saying for you - don't wake famously, as long as it's quiet ...”
Military Reviewin Yandex News
Military Reviewin Google News
349 comments
Information
Dear reader, to leave comments on the publication, you must sign in.