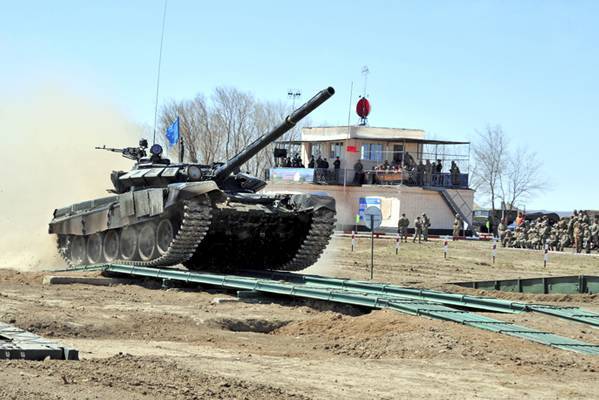 Our tankers proved this year that they are not afraid of dirt or blood ...

Who would have thought that the idea of ​​Russian Defense Minister Sergei Shoigu was "measured tanks»In this sports biathlon will become so popular. And if last year only four countries ventured to enter the tank biathlon route near Moscow: Russia, Kazakhstan, Belarus and Armenia, then this year along with army men from neighboring countries at the Alabino training ground they will cross tank guns abroad: Americans, French, Germans, Italians, Arabs, Israelis ... Twenty countries, at least, expressed a desire to show what modern tanks and crews are capable of. Hot battle in August is coming ...

Therefore, our tank crews began to prepare for this world event a long time ago. From January, on the training grounds of the Regional Commands "East" and "West" under the control of the main tank driver of the Ministry of Defense of the Republic of Kazakhstan Major General Amir Khalikov, the contract servicemen honed their skills despite the severe cold and snowfall. They even managed to carry out their own championship in Ayagoz on the basis of a tank brigade and determine the best ones in their specialty. But, before telling about this April contest, let me remind you about the most exciting moments of that August battle near Moscow.

What happened in August last year at the Alabino training ground and in what terrible tension our tank crew held the entire leadership of the Russian army led by Sergei Shoigu, said the well-known sports commentator Dmitry Guberniev on the Russia channel. An article in the "Megapolis" entitled "Tankers are not afraid of dirt" also declassified some details, in particular, told about how Senior Lieutenant Janat Kuanyshev broke his arm and was forced to go the distance. A sergeant of contract service Miras Nurko, who replaced the officer in the commander’s place with his crew (gunner senior sergeant Aydin Kalioldin, driver mechanic Marat Tusupov), is practically impossible. In the difficult distance of tank biathlon, they, in spite of everything, managed not only to overtake the Belarusians and Armenians, but also to get very close to the championship owners, the Russians.

“52 seconds then we lost to the leader of the competition,” recalls Major General Amir Khalikov. - During the competitions, the crews had to cover a distance of 20 kilometers. The result, as in the ski biathlon, was formed on the basis of the total time passed and the goals hit. Missed the target - go to the penalty loop. The first place was taken by the Russian tank crew with the result 23 min. 44 seconds The second place of honor is 24 min. 36 seconds Third with the result 25 min. 25 seconds Belarusians finished. Armenians became the fourth. They took the passage of the entire distance 29 min. 48 seconds

Then, near Moscow, undoubtedly, our mechanic-driver Marat Tusupov, whom sports commentator Dmitry Guberniyev baptized as the “Kazakhstan Schumacher” and “tear-head”, became the hero of the day, the favorite of the public. From our tank, our driver mechanic literally squeezed all the juice, showing the best intermediate time. When he overcame a “minefield” at a speed of about one hundred kilometers per hour, the generals on the tower applauded him standing, and Sergei Shoigu, after the end of the competition, even tried to lure the contract soldier he liked into the Russian army, but it was not there. Today the corporal Marat Tusupov is the best in the specialty of the scale of the entire Commonwealth of Independent States! How not to be proud of it?

The Kazakhstan tank biathlon championship has just ended in the Ayagoz garrison at the Mailino range. The battle and under Ayagoz was hot. 12 of the best tank crews from the 4 teams of the Regional Commands “East”, “West”, “South” and the Airborne Troops fought for the first place and the opportunity to represent Kazakhstan at international competitions near Moscow.

“Tank biathlon is a new type of military field sporting competition between tank crews, which includes combat training conducted according to the rules of classic biathlon,” commented on the combat training of the Colonel Yuri Askarov, commander of combat training, Vostok. - We held competitions in two days in two stages: “sport” and “individual race”. The first stage consisted of four types of exercises, with the first three exercises performed by one of the crew members by drawing lots, the last exercise, the obstacle course, was carried out as part of the crew, which was held on a specially prepared sports track. The distance is a 3 circle over a kilometer 4. Total 12 km over rough terrain with obstacles equipped on it: barrage and maneuvering section, anti-tank ditch with passage, ford, two burial mounds, track bridge model, two slopes with a passage between the pillars, escarpment, comb, track pass in the mine explosive barrier. ..

For violation of the rules and any mistakes, the crew was immediately fined, for an error in shooting - an extra lap. With the passage of the first round, the shooting was carried out from a twin PKT machine gun at ranges from 600 to 800 meters. With the passage of the second round - from the NSVT anti-aircraft machine gun. Before the finish - from a tank cannon with regular artillery shots on the move.

“All crews competed on T-72B tanks, which are now in service with all tank divisions of the Armed Forces of the Republic of Kazakhstan,” continues Yuri Askarov. - Tankers did not have to relearn. But what kind of tank will fall on this or that team, determined the lot. We, as the hosts of the championship, of course, prepared all the equipment and material base, but we could not choose the best tanks for ourselves. The conditions for all crews were equal, and refereeing was as transparent as possible.

- Well, for their own guys, the victorious recipe was probably prepared anyway. And run the track before others, and the target "on the tooth" tried.

- The recipe for all winners is simple: you need to run fast, drive skillfully, shoot straight. In short - it is necessary to be friends with the head. Constantly thinking about how and what to do in battle, their comrades do not let down. In the team work. The crew of three people must act as one, as a single organism.

- You said in battle, but this is a simple biathlon, where there are more elements of the show, a spectacle, than a real combat work.

- Competitions were so organized that the situation was really close to combat. Crews were limited in time, and penalties were awarded for errors. Excitement and stress were experienced by all. So, it was necessary to be able to control their emotions. Fear of suppress and excitement. The strongest wins! Actions taking place in competitions can be useful on the battlefield. In addition, it gives us the opportunity to clearly see and understand what the level of preparedness of our tankers is now.

According to Colonel Askarov, whatever the challenging biathlon track, it still remains for the tank crews of all brigades to be an “old acquaintance”, with whom they have long been “able to properly handle” in order to achieve the desired result.

“A lot depends on the individual actions of the commander of the crew, the driver and the gunner operator as a whole and their well-coordinated work,” said Lieutenant Colonel Kayran, deputy commander of the military unit 10810 for educational and social-legal work. - Every detail of their joint actions is important: time to search for targets, prepare the tank for firing, fire to kill. It is important for the gunner not to miss the mark, but for the driver-mechanic to lead the tank through jewelry through all obstacles without gaining penalty points.

- How did masterful Marat Tusupov do it near Moscow?

- Exactly. By the way, this crew was the leader in these competitions, but the guys didn’t have enough for the victory.

According to the general results, the crew of senior lieutenant Sagi Batyrkhanov of the 1 military unit of the West, West, and 25744, the crew of Lieutenant Kuandyk Kenzhegulov of the military unit, 2, of the East military crew and 10810, took the lead Parakhata Tynyshtybaeva a / h 3. Winners and prize-winners of the competition were awarded with medals, diplomas and valuable gifts. The commander of the tank battalion of the Aktau tank brigade, Major Adil Tursunkulov, whose subordinates achieved tangible success both in biathlon and in the service as a whole, had the opportunity to study at the academy. Captain Marat Omarov took his place. Now he is responsible for the training of tank crews of the ESC "Zapad".

The chief of the General Staff, Colonel-General Saken Zhasuzakov, presented the best tank crew with a dummy of a golden T-72B tank and, in Ayagoz, approved the list of crews to defend the honor of the Armed Forces of Kazakhstan at international competitions near Moscow.

“I am sure that the honest and uncompromising struggle of the crews increased the prestige of the tank forces and attracted a lot of attention from those who watched the tank biathlon,” said First Deputy Minister of Defense Colonel-General Zhasuzakov at the closing ceremony of the championship. - I hope that this will give a new round in the combat training of tankers, and in the fact that those who want to serve in the tank forces will now become much more.

Ctrl Enter
Noticed oshЫbku Highlight text and press. Ctrl + Enter
We are
A great interview with Sergey Lavrov: about Ukraine, Obama and IranWhat you didn't want to know about England
Military Reviewin Yandex News
Military Reviewin Google News
40 comments
Information
Dear reader, to leave comments on the publication, you must sign in.