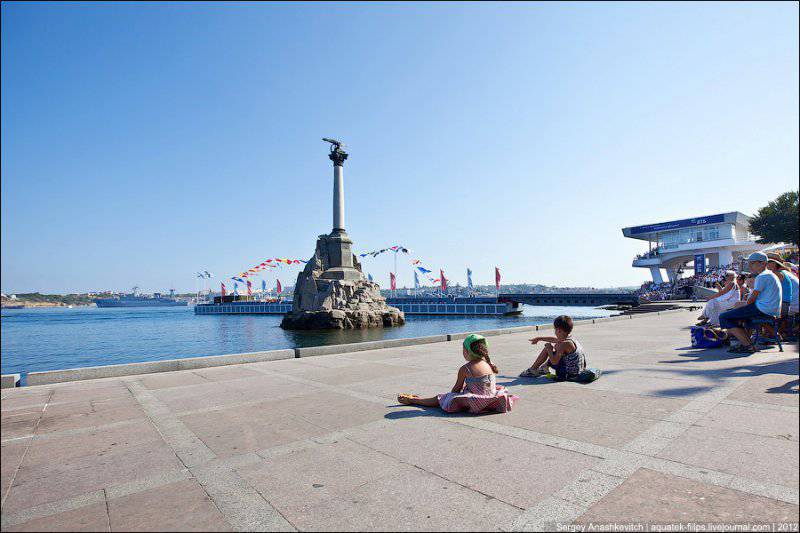 It is noteworthy that many significant dates for Sevastopol end with the number four. 1854 year. Crimean War. Anglo-French troops landed on a peninsula near Evpatoria. Sevastopol, which had not been defended for more than a week, lasted almost a year, from October 1854 to September 1855.

Hold on despite death fleet, the technical superiority of the enemy, the total incompetence and corruption of the rear services of Tsarist Russia. In these months, the naval ingenuity and courage of the sailors of the Black Sea Fleet was fully manifested. And when the enemy finally occupied the city, which had been completely destroyed, he was so exhausted that there was no question of going deep into Russia. Thanks to the heroism of the sailors and soldiers of Sevastopol, Russia's losses from defeat in the war were minimized, and Crimea was ultimately returned to it by the Allies. Unfortunately, no proper conclusions were made in the Russian Empire, and the same thing repeated half a century later in Port Arthur ...

In the years of the first defense of Sevastopol, the names of the brilliant admiral Pavel Stepanovich Nakhimov, engineer Edward Totlebin, outstanding surgeon and innovator Nikolai Pirogov, the first Russian sister of mercy Darya Mikhailova (Sevastopol), became known. The legendary sailor Peter the Cat many times made forays into enemy positions and got and brought into the city six enemy "tongues" and was twice presented to the award. The beginning writer Leo Tolstoy was also a direct participant in the events.

During the years of revolution and civil war, Crimea more than ten passed from hand to hand. In Sevastopol, about ten times the government changed, it was under occupation of Kaiser Germany, then the Entente, until the power of the Bolsheviks was finally established over it.

On the eve of World War II, the Black Sea Fleet was the second most powerful after the Baltic. It consisted of a battleship, five cruisers, eleven destroyers.

On the night of June 22, 1941, the planes of Nazi Germany approached Sevastopol from the sea. Their goal was to bomb the ships and mine in the fairway. It was on the city that one of the mines dropped on a parachute fell, which claimed the lives of the first Soviet citizens - the twelve-year-old girl Lena Sokolova, her mother Barbara Sokolova and grandmother Alexandra Belova. That is how the Great Patriotic War began for us. It happened even before the guns crashed and roared across the western border of the Soviet Union, ripping up the sky, the Junkers engines. Before at least one Soviet soldier died.

Black Sea Fleet and Navy aviation they met the enemy with dignity, showing him what war with the Russians was. The first German aircraft was shot down in the morning of June 22 just under Sevastopol, and then Soviet aircraft bombed the oil fields of Romania, an ally of the Third Reich, from Crimean airfields.

Then, from October 1941 to July 1942, the months-long, bloody defense of Sevastopol ended with its occupation. In those days, German propaganda called the city "the most impregnable fortress in the world." The second defense of Sevastopol was an even more impressive example of mass heroism than the first. True, the names of most of the characters, we will never know.

Only in May 1944, finally, did the liberation of the city and the whole peninsula from the Nazi invaders take place. In those days, Sevastopol resembled a picture of the apocalypse: black ruins on land and parts of submerged ships and ships sticking out of the water.

In 1948, rebuilt Sevastopol became a separate administrative unit within the RSFSR from the Crimea. In 1954, on the personal initiative of N. S. Khrushchev, the Crimea was transferred from the RSFSR to the Ukrainian SSR. And although the decision was more than controversial, at that time no one dared to object to the dear Nikita Sergeyevich ...

It is noteworthy that the transfer of the Crimea from Russia to Ukraine took place in violation of the then effective legislation. In addition, according to Sevastopol, which, as we remember, was a separate administrative unit, there were no transfer documents at all. That is, formally, he remained in the RSFSR. Nevertheless, contrary to all laws and common sense, the main base of the Black Sea Fleet was in the Ukrainian SSR.

Did not return the Crimea to the RSFSR and subsequent general secretaries. Of course, within the framework of a single country, this was merely a convention, but everything changed when state borders were erected in place of purely conditional administrative borders.

1991 year. With the division of the USSR, Crimea and Sevastopol find themselves on the territory of independent Ukraine. The Supreme Council of the already sovereign RSFSR was going on quite legitimate reasons to demand back if not all of Crimea, then at least Sevastopol. But the overthrow of the Supreme Council put an end to these plans. Russia actually came to terms with the loss of Sevastopol and agreed to pay rent to Ukraine for basing the fleet there.

Twenty three long years Sevastopol remained the most Russian city outside of Russia. Until 2014 year. The leaders of the Ukrainian state and nationalists all the years sabotaged the activities of the Black Sea Fleet and never hid their dream of finally squeezing it out of Sevastopol and introducing NATO ships there. But all bad things come to an end. For the legendary hero city, it ended the eighteenth of March two thousand and fourteenth year. Therefore, it is particularly noteworthy that the new liberation took place on the eve of the anniversary of the liberation of the previous one. Over one история - and began another.

Ctrl Enter
Noticed oshЫbku Highlight text and press. Ctrl + Enter
We are
What you didn't want to know about EnglandList of destroyed the largest and most high-tech enterprises
Military Reviewin Yandex News
Military Reviewin Google News
46 comments
Information
Dear reader, to leave comments on the publication, you must sign in.