The junta killed three Alpha employees in Slavyansk, twelve were injured! They were deliberately framed. 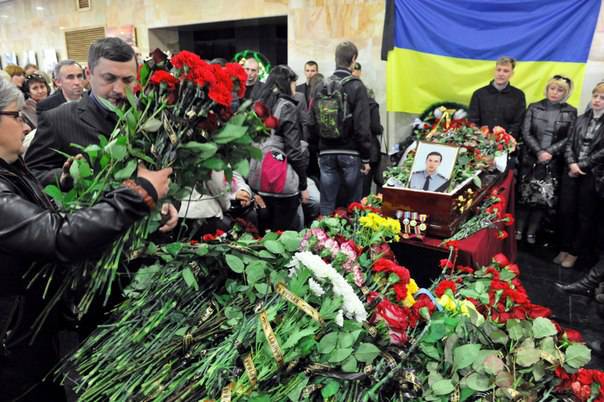 The fact that in Slavyansk the Ukrainian Alfa suffered heavy losses is not particularly spread in Kiev. They talk about two “two hundredths” - Lieutenant Colonel Alexander Anishchenko (Sumy) and an employee of the instructor department Captain Ruslan Luzhevsky (Kiev). In this case, the emphasis is placed on the fact that the heroes of anti-terror were killed, they say, in battle with the damned separatists.

We will talk about how things really are!

Employees of the Special Operations Center "A" of the SBU (central office) were deployed to the civil airfield in Kramatorsk. The "alfovtsy" gathered, obviously, in such a hurry that they did not even have time to grab towels. At first, for about a week, the special forces were not even supplied with food and resolved the issues of maintenance on their own.

The arrivals had the experience of dramatic events on the Maidan and did not want to shoot at their own people. That was the general attitude.

To this should be added the fact that, thanks to the reconnaissance carried out, the combat commanders represented which main object in Slavyansk they would storm. Instead of the classic antiterrorist operation, for which the division is intended, - heavy fighting in the conditions of a city divided into defense sectors.

After in mid-April, under the Slavyanskiy, the head of the SSO "A" Colonel Kuznetsov, heavily wounded by the Alpha Poltava, was seriously wounded, a leapfrog began with command assignments behind which stood Judas from the special forces - Vasily Krutov.

Characteristic messages of the time, here is one of them:

“Deputy Chairman of the Security Service of Ukraine Viktor Yagun told the details of the shooting of Alpha employees in Slavyansk. This is reported by Facts. “Yes, there were about a dozen. They simply shot us - without warning, from the back, from a distance of seven to ten meters. All in the same form of Russian production, in the same identical shoes and special glasses. They fired Kalashnikov assault rifles (AK-100), which had only recently been adopted by Russian special forces. So the stories that their Ukrainians fired from among self-defense are not true. Two days later, we already knew for sure that the sabotage group was headed by Igor Strelkov, an officer of the special purpose 45 regiment based in the Moscow region, ”he said.

Arsen Avakov carried a similar shameful garbage. It was a vivid demonstration of absolute non-professionalism: the AK-100 is a ship's cannon!
The 100th AK series is an export one; many countries buy it. It is very difficult to distinguish the AK of the 100th series from the AK-74M, but it is generally impossible from afar.
About the same, as real fighters Igor Strelkov are equipped (by the way, has no relation to the airborne forces), now the whole world knows from numerous photographs. You can compare the description of Yagun and other storytellers.

Now let us ask ourselves a simple question: “Russian saboteurs” are shooting under the Slavic commander of the SSO “A” SBU and killing a fighter from the Poltava “Alpha”, and his subordinates after that continue to pull the rubber.

Can you imagine something like that ??? Of course not!

Thus, all attempts to raise the Ukrainian "Alpha" to a decisive blow to the "terrorists and separatists", were not crowned with success. As best they could, the employees resisted the fulfillment of inadequate orders, evading the participation in civil war and the performance of functions not characteristic of them.
And then it was decided to punish Alpha!

By that time, the long-awaited order to withdraw units from Slavyansk followed. It is logical that the personnel should be evacuated in the same way as he arrived here - by “turntables” by air. However, the High Command developed a land route, which caused in the unit, to put it mildly, bewilderment. It became clear: the men elementary substitute a blow!

In this situation, 5 in May, one of the groups of “Alpha”, not trusting anyone, turned off mobile phones and left its location near Slavyansk on its own safe route, about which no one informed. And so I avoided losses, safely reaching Kiev.

The second group gave themselves to persuade and followed in a column, moving in minibuses. And here - attention! - we will tell about the main meanness. By the morning or a little earlier, the militiamen in Slavyansk threw in information that some of the comrades-in-arms had “wrung out” a column of armored vehicles, which was being sent to the besieged city for help.

As far as can be judged, in Slavyansk they sorted out with this information, checked it and found that it was disinformation! And they decided that in this way the opposing side intends to attack the city under the guise of supporters of the DPR. That is why they strengthened the "tank-dangerous" directions.

And just along the route, through Semenovka, the second part of Alpha was sent. There, it was struck "with all the proletarian hatred." Bottom line: three dead, twelve wounded.

Bandera in Kiev can utter curses to Russia for “killing special forces heroes,” however, the truth is that the officers of the SSS “A” SBU refused to kill their people and were meanly summoned by villains to the blow of the militias.

Thank you guys!
Eternal memory to the dead. The new Ukraine, and she will definitely be, will reward with a good memory for refusing to participate in a fratricidal civil war. And he will curse all Judah.

The newspaper "SPECIALIZ RUSSIA" and the magazine "RAZVEDCHIK"