The situation in the south-east of Ukraine. Chronicle of events 10 May 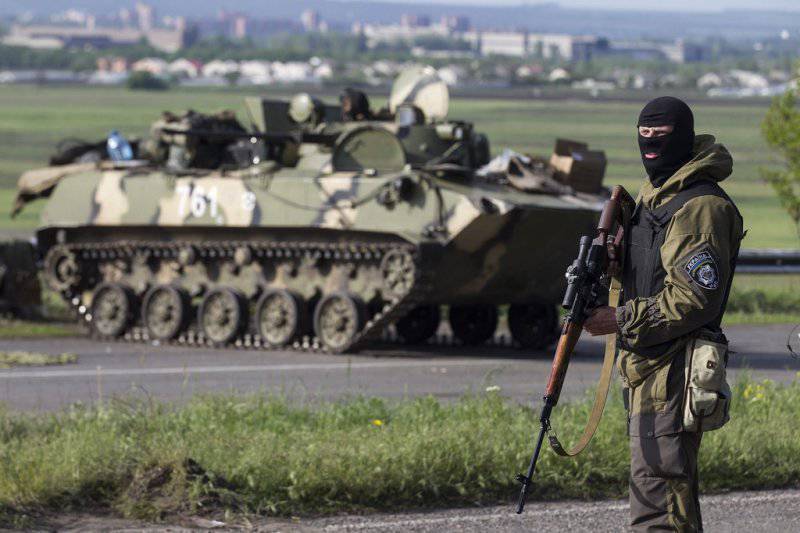 PM22:52 The military unit burns in Mariupol, Ukraine, reports the city portal "0629".
The publication also reports that, according to unconfirmed reports, the city prosecutor’s office is also on fire.
"At the moment, the causes of ignition are unknown, there is no information about the victims," ​​the media said.
The prosecutor's office of the city does not confirm this information. But, according to eyewitnesses, the building of the city prosecutor's office is engulfed in flames.
“Yesterday, the military unit was hurriedly left by the military, and today marauders were operating in it,” the publication said.
PM21:57 The shelling of the roadblock near the village of Andreevka on the outskirts of Slavyansk was carried out from mortars, RIA reported News representatives of self-defense of the city.
Earlier it was reported that on Saturday evening, on the outskirts of Slavyansk, intense fire from automatic weapons and artillery.
"We were fired from mortars, land mines", - said the fighter of self-defense. According to him, as a result of the shelling no one was hurt. Currently, the shooting has subsided.
PM21:51 Shooting from automatic weapons and artillery was opened on Saturday evening on the outskirts of Slavyansk, where a referendum will be held tomorrow, RIA Novosti reports.
Shooting is at a roadblock near the village of Andreevka. This checkpoint has been repeatedly subjected to fire from the Kiev-controlled military.
Currently, the shooting is not only automatic weapons, but also with the use of artillery.
PM20:15 One of the residents of Mariupol claims that during the operation of the Ukrainian security forces at least 60 people died. In his opinion, such data will be announced soon. The man claims that half of the dead are policemen who rebelled against the Kiev authorities.

19.36 The Ukrainian authorities did not let Metropolitan Hilarion of Volokolamsk enter the territory of the country. A Russian priest was detained at the airport in Dnepropetrovsk. He was handed a written notice of the ban on entry without giving reasons.
PM17:13 In two districts of the Donetsk region of Ukraine, the referendum began early.
PM15:51 A supporter of federalization was killed on Saturday in the city of Bryanka, Luhansk region, told reporters the coordinator of the headquarters of the resistance movement of the Luhansk region Ekaterina Abbasova.
"Today, in Bryanka, Alexander Viktorovich Kolesnikov, a representative of the resistance of the Luhansk region, was brutally murdered. His friend is in a serious condition in the hospital," said Abbasova.
PM15:33 The Ukrainian Orthodox Church confirmed the death of the priest at one of the checkpoints in the Donetsk region.
PM15:24 Turchinov appointed acting governor of the Luhansk region, Irina Verigina.
PM15:04 More than 1500 sites are ready for a referendum in the Donetsk region, said the head of the CEC of the proclaimed Donetsk People's Republic
PM14:12 The governor of the Luhansk region, Mikhail Bolotskikh, was dismissed.
PM13:45 Among the residents of Mariupol excitement. in supermarkets that run huge queues. people buy essential goods and stock up on drinking water (there were interruptions yesterday, people are afraid of repetition), according to the VO People’s Correspondent from Mariupol.
PM13:36 Volunteers from Israel can join the ranks of the militia in the Donbas. This was stated by the "people's mayor" of Slavyansk Vyacheslav Ponomarev, reports the correspondent of "Reedus". “A number of the Israeli military have expressed a desire to come to us as volunteer militias,” said Ponomarev at a press conference on Saturday. He noted that the militia will continue to fight, "if the junta does not withdraw troops."
PM13:26 The withdrawal of security forces controlled by Kiev and the exchange of prisoners are the main conditions for the start of negotiations between supporters of federalization and the authorities in Kiev, Vyacheslav Ponomarev, the people's mayor of Slavyansk, said.
"We voiced our conditions: the withdrawal of troops, the exchange of prisoners of war," said Ponomarev at a press conference on Saturday in Slavyansk. "Only after these conditions are met are we ready to begin negotiations. If the junta continues to keep its troops here, then we continue to fight," he added.
PM13:26 Claps and shots are heard on Saturday afternoon in the center of Mariupol, an infantry fighting vehicle burns near the city council building, the site of the local edition 0629 reported.

According to information received from the scene, the BMP was burned by provocateurs. The local militia asks all those present not to make a mess, not to destroy the cars and to take the nearby houses under protection.
PM13:21 Turchinov said that the authorities in Kiev "hear the Donbass and are now ready to sit down at the negotiating table." He added that, together with the Prime Minister of Ukraine appointed by the Verkhovna Rada, announced the holding of round tables throughout the country.
PM13:16 Special Representative of the President of Russia for Transnistria, Deputy Prime Minister Dmitry Rogozin, who is on a visit to Tiraspol, reports that Ukraine and Romania do not let his plane pass through their airspace. “Romania, at the request of the United States, closed the airspace on my board. Ukraine does not let in again. Next time I’ll fly to TU-160,” Rogozin wrote in his microblog on Twitter on Saturday.
8 May Rogozin's plane was not allowed into the airspace of Ukraine. “It turns out that 4,5 hours fly to Chisinau. Through Bulgaria and Romania. Ukraine does not let through its space. It’s good that Ukraine is not Russia, otherwise it would have to fly around 20 hours,” he tweeted.
PM13:05 The life of a twelve-year-old boy wounded in Slavyansk is out of danger. This was stated by the "people's mayor" of Slavyansk Vyacheslav Ponomarev, reports the correspondent of "Reedus". “His life is not threatened, vital organs are not affected,” said Ponomarev at a press conference on Saturday.
PM12:57 In Mariupol last night attacked three gun shops. As the 0629 correspondent reports, a window has been broken in the Columbus store, but the doors have not been broken. The Arsenal store also broke windows, and the Extreme store was burned.
PM12:44 In the Donetsk People’s Republic (DPR), they do not have information about the arrest of representatives of the Red Cross in Donetsk on the eve, co-chairman of the DPR government Miroslav Rudenko told Interfax on Saturday. "I know about this stories from the words of journalists. Whether this actually took place or not, I do not know, "he said.
PM12:29 The police chief of Mariupol, Valery Andryshchuk, was taken away in an unknown direction by infuriated citizens after he opened fire on his colleagues, they told Interfax in the self-defense headquarters. "When the police refused to comply with the order to counter the participants of the festive rally dedicated to Victory Day the day before, the police chief took out his gun and opened fire on his colleagues who did not obey, after which he was detained, but he tried to escape," the source said.
The rally participants caught up with Andryshchuk, beat him, and then put him in a car and drove away in an unknown direction. “The location of Andryshchuk is unknown to us,” the militia spokesman said.
PM11:45 In Mariupol (Donetsk region) declared the day of mourning. This was reported in the Mariupol city council.
"In connection with the tragic events 9 of May 2014 of the year that caused the death of people, in the city of Mariupol 10 of May 2014 of the year was declared a day of mourning," the message says. "The city council expresses sincere condolences to the families and friends of the victims."
PM10:50 About the lies of the Ukrainian media. BMP crushes people:

PM10:40 According to the latest data in the city about 20 killed and several dozen wounded, according to the people's correspondent "IN" from Mariupol.
PM10:29 In Mariupol, the forces of the National Guard of Ukraine are withdrawn from the "epicenter of events" in order not to provoke even more activists and for the sake of the safety of civilians, the press service of the National Guard said.
"As of 8: 00 in the morning, 10 in May the situation in Mariupol remains steadily tense. The command of the National Guard of Ukraine and the personnel are doing everything possible to stabilize the situation in the city," the statement said.
PM10:29 Employees of the Red Cross, who, as previously reported by some media, were detained in Donetsk on the eve, were released. About this correspondent. Itar-Tass reported by telephone spokesman for the International Committee of the Red Cross / ICRC / for Europe and Central Asia, David-Pierre Marquet. According to him, there was no talk of taking hostage.
“They were detained for control in Donetsk and quickly released. It was not about taking hostages,” Mark said.
PM10:19 The building of the Mariupol City Council partially burnt out. 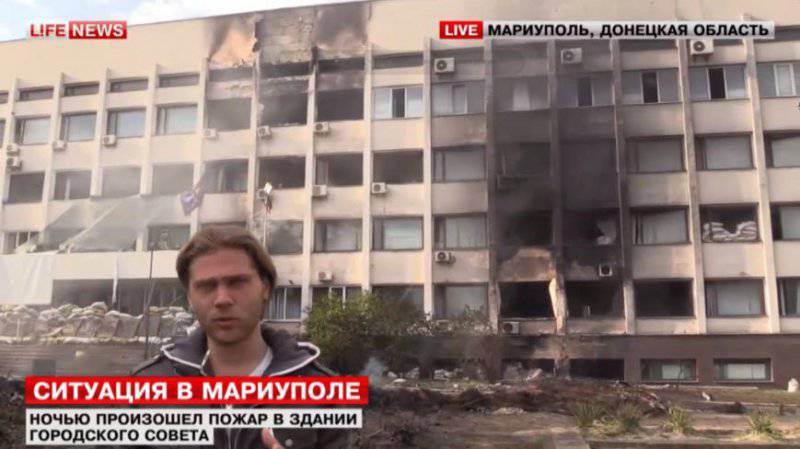 PM02:04 The city council building is burning in Mariupol, where Kiev-controlled security forces are conducting a special operation against supporters of the federalization of Ukraine, the local edition of 0629 reported on Saturday.
"Now the city council building is burning. Several fire truck and ambulance crews left for the place. The fire started from the upper floors," the newspaper reports, without giving details and causes of the fire.
PM01:58 According to media reports, unknown persons attacked the office of the Red Cross charitable organization located in the center of Donetsk. They released all the women in the room and took seven men hostage. Among the prisoners captured there are volunteers who came to Donetsk from Kiev with medicines. One of them is a French citizen.
The kidnappers also took all drugs from the Red Cross office. According to the data, currently abducted volunteers are in the building of the seized Donetsk Regional State Administration.
PM01:26 Sniper bombardment of civilians in Mariupol is a provocation by the Kiev authorities that will only lead to an influx of volunteers into the People’s Militia, Miroslav Rudenko, co-chairman of the government of Donetsk People’s Republic, told RIA Novosti on Saturday.
"This is a provocation by the Avakov security officials and the National Guard. Tomorrow we will have an influx of volunteers, I feel. People react very unequivocally to such moments, as a result, the junta leads people en masse to the militia - no other way than to fight this junta, no, "said Rudenko.
PM01:06 The National Guard of Ukraine has denied reports of an assault by the militias of a sanatorium in Donetsk, the agency’s website says on Friday.
"The information that armed activists stormed the sanatorium where the National Guard soldiers live in Donetsk and that the soldiers laid down their arms does not correspond to reality. The soldiers of the National Guard do not live on the territory of the Miners Dawn sanatorium in the city of Donetsk,” - said in a statement.
PM00:47 "The police chief of Mariupol was kidnapped, several policemen were killed," he wrote in his Facebook account and acting Head of the Ministry of Internal Affairs of Ukraine Arsen Avakov.
PM00:33 Andrei Krasnoshchekov took a short interview with the uncle of a 12-year-old boy who was wounded on Victory Day in Slavyansk.