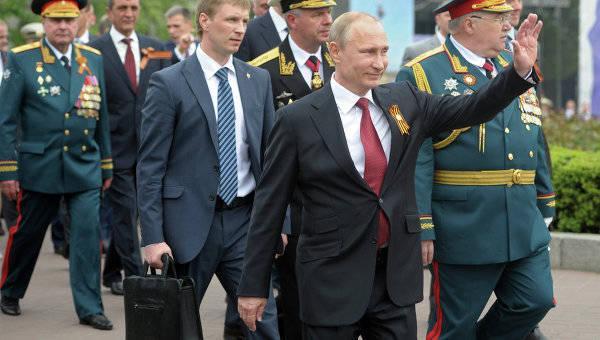 The Foreign Ministry of Ukraine said they considered Putin’s visit to the Crimea a “provocation”.

Ukraine protested the arrival of Russian President Vladimir Putin to the Crimea, where he is expected to take part in celebrations in Sevastopol on the occasion of the 69 anniversary of the Victory in the Great Patriotic War and the 70 anniversary of the liberation of the city from the Nazi invaders.

The Russian leader for the first time after the Crimea entered the Russian Federation arrived on the peninsula and took part in festive events in Sevastopol on the occasion of the 69 anniversary of the Victory in the Great Patriotic War and the 70 anniversary of the liberation of the city from the Nazi invaders. Putin attended a military parade, laid wreaths with veterans at the monument to the defenders of Sevastopol 1941-42, and visited the Cathedral of St. Equal-to-the-Apostles Prince Vladimir.

"Ukraine regards this step as a blatant disregard by the Russian side of the current legislation of Ukraine, the norms of international law, a flagrant violation by Russia of Ukraine’s sovereignty, the UN Charter and the UNGA resolution" Territorial Integrity of Ukraine ", as well as the Treaty of Friendship, Cooperation and Partnership between Ukraine and Russia Federation of 1997 year, "- said in a statement the Foreign Ministry, promulgated on Friday.

The Foreign Ministry of Ukraine said they considered Putin’s visit to the Crimea a “provocation”.

The first visit of the head of state to the Crimea and Sevastopol, which became part of Russia in March following the results of the referendum, was not officially announced. However, information about the plans of the Russian authorities to hold a parade in the Crimea caused a negative reaction in a number of Western countries, which did not recognize the referendum and criticized Moscow’s policy towards Ukraine. Thus, the Federal Chancellor of the Federal Republic of Germany Angela Merkel expressed regret over the plans of Russia to hold a parade in the Crimea in conditions when the situation in Ukraine is tense. The Kremlin called Merkel's regret unjustified.

NATO Secretary General Anders Fogh Rasmussen and Representative of the US National Security Council Laura Lukas-Magnuson on Friday expressed dissatisfaction with the visit of Russian President Vladimir Putin to the Crimea.

According to Agence France-Presse, the White House expressed dissatisfaction and said that Putin’s visit would aggravate the situation in Ukraine.
“Such a visit will only increase tensions,” the agency quoted a statement by a representative of the National Security Council, Lucas-Magnuson.

According to Estonian television, Rasmussen, who is currently visiting Tallinn, called Putin’s visit “inappropriate.” Speaking with a lecture at Tallinn University, the NATO Secretary General noted that
"Ukraine did not call Putin to the Crimea, so his visit there is inappropriate. Under international law, we consider Crimea to be part of Ukraine," the secretary general said.

Rasmussen confirmed that NATO, as an organization, had stopped military cooperation with Russia. He recommended the same to all member countries separately when it came to selling Russian French helicopter carriers Mistral and training the Russian response forces to France and Germany.

The European Union also expressed its regret over Putin’s trip.

“The EU regrets the presence of President Vladimir Putin at a military parade in Sevastopol,” Maya Kosyancic quoted Reuters spokesman Catherine Ashton quoting Reuters.
Ctrl Enter
Noticed oshЫbku Highlight text and press. Ctrl + Enter
We are
Veterans of the Victory Parade: we saw the military power of RussiaRogozin visited Nizhny Tagil, shot from a tank and a gun
Military Reviewin Yandex News
Military Reviewin Google News
83 comments
Information
Dear reader, to leave comments on the publication, you must sign in.